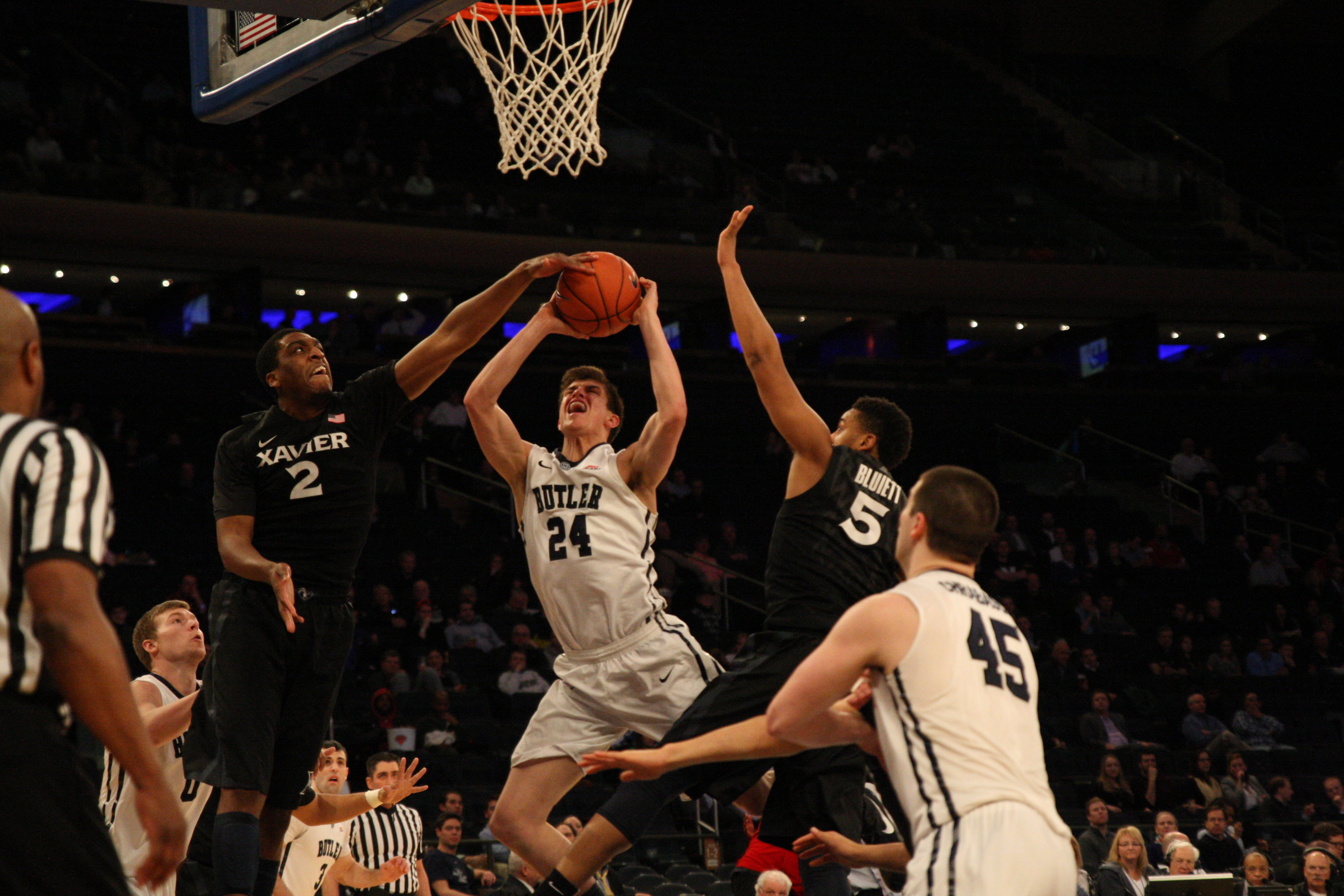 Just because it was in New York City, it didn’t mean there was going to be anything different about Thursday night’s Butler-Xavier game.

The No. 6-seed Musketeers came away with a 67-61 overtime win over the No. 3-seed Bulldogs, advancing to play Georgetown University in the Big East semifinal Friday.

It was just another chapter in the long-standing history between the two teams. Thursday’s game was the 28th in the 52-game series that was decided by fewer than 10 points, and the first of what could be many meetings at the Garden.

Butler head coach Chris Holtmann said he saw about exactly what he expected to see from the Musketeers Thursday.

“I think any time you play a team that has a lot of familiarity with each other, it’s bone on bone,” Holtmann said. “It comes down to can you make free throws? Can you take care of the ball a little bit better? Xavier did a better job than us tonight.”

The Bulldogs got out to a 12-2 lead to start the game, but Xavier went on a run of its own, tying the game at 18 midway through the half.

These scoring runs went back and forth throughout the night. But the Bulldogs also hit a scoring drought in a key part of the game, going without a point from the 14:16 mark to the 8:24 mark, before junior Kellen Dunham hit a pair of free throws.

Butler would go nearly three and a half minutes more before scoring a field goal. Dunham hit a jump shot to give the Bulldogs a 47-44 lead.

Holtmann said the Bulldogs are no strangers to these droughts, but it was the defense that disappointed him.

“Our team has had some droughts throughout the year offensively, but really our mainstay has been our defense, and it let us down a little bit tonight,” Holtmann said.

The Musketeers used their post play to stay in the game. Layups from Matt Stainbrook, Myles Davis, and Jalen Reynolds kept them within one point at 51-50.

Junior Roosevelt Jones extended the lead before former Butler recruit Trevon Blueitt hit a three-pointer to tie the game at 53 with 2:37 to play.

(Photo by Mike Andrews) Senior Alex Barlow heaves a half-court shot at the end of overtime in a 67-61 loss against Xavier in the Big East Quarterfinals.

Both teams would go scoreless the rest of the game. Xavier had a chance to take the last shot, but Barlow stole the ball from Stainbrook and heaved up a half court shot as time expired.

It was right on line, but fell just short, hitting the bottom of the net on its way down.

The Musketeers got off on the right foot in overtime with an old-fashioned three-point play by Dee Davis. Then Barlow hit his fifth three of the night, keeping the Bulldogs in it.

But another three-point play by Reynolds gave the Musketeers momentum as they outscored the Bulldogs 14-8 in the extra period.

Barlow, the Big East Scholar Athlete of the Year, finished with a career high 22 points, with four rebounds and four steals. Dunham put up 17 points, while sophomore Andrew Chrabascz had 16.

Junior Kellen Dunham goes up for a layup by Xavier’s Myles Davis.

Barlow, who went 5-for-14 from three-point range, was already looking ahead to the NCAA Tournament after Thursday’s loss.

“Obviously, I’d like to make a few more shots. 5-of-14 is not a great percentage,” he said. “So I’ll just work on that for the next game and make sure I knock them in.”

Butler shot 39 percent on the night, its 12th performance under 40 percent of the season

Three Xavier players had 13 points — Stainbrook, and both Myles and Dee Davis. Reynolds had 12 and Blueitt had 11.

Butler’s biggest downfall Thursday was its free throw shooting, going 10-for-19 at the line after shooting a perfect 20-for-20 in a win over Providence Saturday. Xavier didn’t shoot great from the line either, going 14-for-23.

“We were hoping to be able to get to the line, be a little more efficient than what we were,” Holtmann said. “That, and our inability to take care of the ball at the level that we’ve done for most of the season, I think, really affected us.”

The Bulldogs had 14 turnovers on the night.

The Musketeers’ bout with second-seeded Georgetown is set to tip off after the conclusion of the Villanova-Providence game, which starts at 7 p.m.

The Bulldogs now play the waiting game, sitting on the loss until they find out their NCAA Tournament seed and who they will play.

ESPN’s Joe Lunardi had Butler projected as a 6-seed heading into Thursday, which could be about right, but the loss may have dropped Butler to a 7-seed.