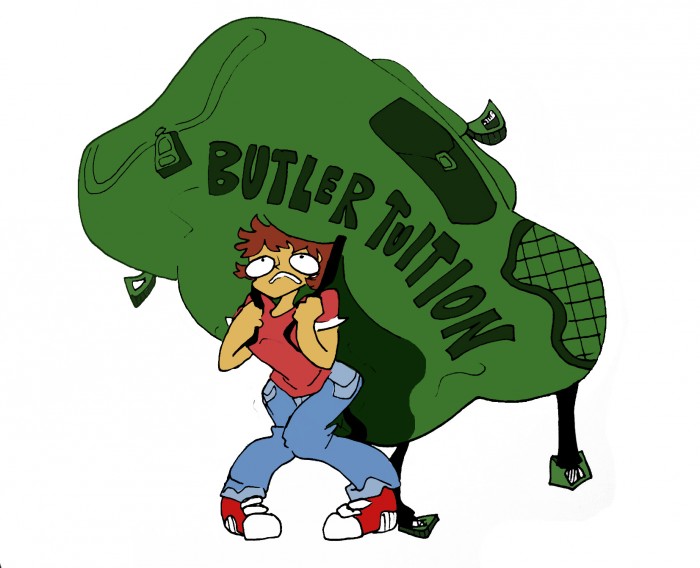 In February, President James Danko announced a 3.75 percent increase in tuition, room and board for the 2015-2016 academic year. Tuition for the coming fall semester will be approximately  $36,053.

Tuition has increased at different rates since the fall semester of 1990. At that time tuition was $9,720, according to statistics from the Office of Student Accounts. By 2000 tuition nearly doubled to $18,040. Eleven years later, tuition surpassed $30,000 for the first time in Butler’s history.

Tuition for the coming fall semester will be approximately $36,053.

Bruce Arick, assistant treasurer and vice president of finance, said tuition increases are based on the national market for higher education. Universities compete with one another, Arick said, and administrators watch how other institutions are performing before making financial decisions.

There are three groups Butler’s administrators use as benchmarks when comparing successful outcomes, including direct competition, peer and aspirant groups.

Arick said many students who apply to Butler using the Common Application also consider attending Indiana University and Purdue University. Because of this, those two universities compose Butler’s first group of competitors.

All of the schools in the third competition group have a significantly higher endowment than Butler.

Endowments represent money or financial assets donated to universities or colleges, according to Investopedia.

Villanova’s endowment was $425 million in 2013, according to the U.S. News and World Report. Wake Forest, Boston College and Texas Christian University all had endowments of more than $1 billion in the same time frame. Butler’s endowment was approximately $180 million.

Danko said he wants to increase Butler’s endowment to $750 million by 2025 as an extension of the 2020 Vision, according to a Collegian article published in October 2012.

In the 2012 Collegian article, Ben Hunter, chief of staff, said the endowment goal was a “stretch, but it is something that needs to be addressed.”

“The endowment,” said Hunter, “is important for the health of this institution.”

For the 2014-2015 academic year, tuition, room and board account for 87 percent of Butler’s revenue, according to the university’s finance division. Endowment and donations account for 2.7 percent and 1 percent of revenue, respectively.

Tuition, room and board account for 87 percent of Butler’s revenue

Arick said the cost to operate a university is not a significant figure in relation to tuition increases. He said the market for higher education sets the parameters that affect tuition prices.

But if other revenue sources such as endowment or donations were to increase, Arick said, there could be less pressure on student-related revenues. Because of this, a university would be able to diversify its source of funds instead of relying on tuition, room and board as the primary sources of income.

Twenty-eight percent of Butler’s budget goes towards financial aid but only 14 percent saw all of their needs met. Most students need to find loans to pay for a Butler education.

In Butler’s case, nine out of 10 students applied for financial aid but only 14 percent saw all of their needs met.

This means almost every student on campus must find other ways to pay for education, including finding loans, which adds to student-loan debt after graduation.

Nearly 70 percent of graduating college seniors in 2013 left school with at least $28,400 in student loan debt, according to The Institute for College Access and Success. At Butler, however, Director of Financial Aid Melissa Smurdon said the average student loan debt was $34,922 for 2013 graduates.

Butler ranked second on the debt list for Indiana schools in 2013 after The Rose-Hulman Institute of Technology which had an average graduate debt of $42,976.

Danko said Butler’s scholarship and grant budget for 2015-2016 will increase by 6.3 percent to approximately $60 million total. This change will “improve access to a Butler education for students and families who would otherwise be unable to afford it.”

Arick said increasing Butler’s endowment would increase the budget for financial aid. Schools that have a $1 billion endowment or higher can use these funds to distribute more scholarships and grants so students do not have to rely on loans.

“As we look to grow the university, growing the endowment is certainly an area that we need to grow,” Arick said. “If we got to $500 million plus it would put us in a nice position with our peer and aspirant group.

Butler students, on average, will graduate with the second highest student loan debt in Indiana at $34,922.

“Schools are able to mitigate student debt if they have significant endowments that can fund financial aid.”

In addition to increasing the endowment, Butler will attempt to raise money through donations from the community to fund the university’s operations.

Arick said students should expect tuition to increase each year at institutions across the country because of the market for higher education, but the percentage change is expected to stay below 4 percent.

“I think you can always expect that tuition is going to go up by something. But it wouldn’t surprise me if Butler 10 years from now is only increasing tuition by 2 percent.”

When asked how Butler defends decisions to increase tuition, room and board, Arick said promoting the 95 percent placement rate, the improving degree value and the new facilities helps the community view Butler as a reputable school.

Also, as more students apply to Butler, Arick said there is proof that more individuals across the country are interested in Butler-related programs.

Over time, more students have applied to Butler. Since the success of the men’s basketball team Final Four appearances, applications have increased from 6,000 to more than 10,000, but Arick said this success rate is not all due to the basketball team. Rather, it is an entire university initiative to improve the school’s colleges, marketing and infrastructure.

Applications to Butler rose from 6,000 to 10,000 after the men’s basketball team’s Final Four appearances. Since their success, Butler has maintained a high-level of interest from prospective students.