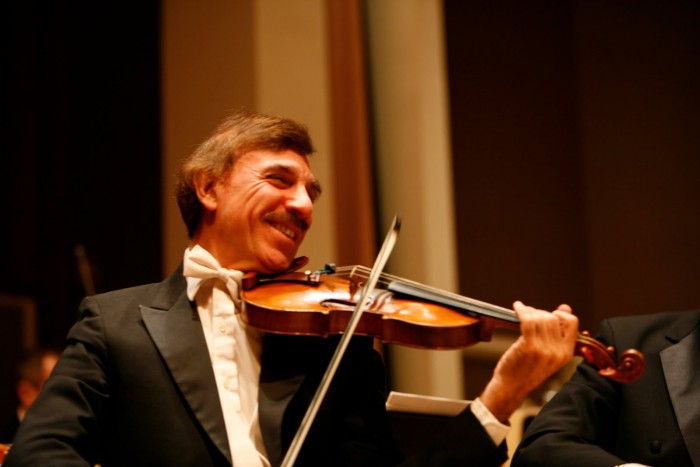 Larry Shapiro, the first official full-time music professor on Butler’s campus, has been teaching here for about twenty-eight years. Over 70 years old, Shapiro said he plans to keep teaching well into his 90’s.

Shapiro began playing the violin when he was just six years old.

“Sixty-seven years later and I’ve almost got the hang of it,” Shapiro joked. “I chose the violin because it was the hardest, and I was right.

“My house was always full of classical music, it was natural to me,” Shapiro said.

Although he was a natural-born musician, Shapiro went through a typical youthful rebellion.

Shapiro started out as an English major at Columbia University. He refused to play the violin for a couple years. Soon, he left and went to play tenor sax in a dance band in Dallas.

He returned to New York and met his wife of over fifty years, Ashley.

“That was when I realized I couldn’t live without it,” Shapiro said, referring to his violin.

Although Shapiro was a little behind when he first started out because of his hiatus, his talent did not go unnoticed.

Shapiro soon dropped out of Colombia and attended the noteworthy Manhattan School. People would call Shapiro after seeing him play, begging him to play for them. He was an original member of the American Symphony, as well as assistant Concertmaster of the New York City Opera.

Shapiro, however, has not always had it easy. A car accident a few years back left him and his wife, Ashley, with severe injuries. Unfortunately, Shapiro suffered a shoulder injury that he is still recovering from today.

As of late, Shapiro underwent cataract surgery for both eyes because he could no longer see the music.

Because of this, Shapiro had to move back his recital to March 31 to have sufficient recovery time.

But he won’t let anything stop him now.

Shapiro said he likes to associate a theme with his recital programs, and this year the theme will be “Musical Bonbons,” or short musical compositions that he thinks are treats.

Shapiro has gathered ten works from Mozart to Gershwin, even including a fiddling tune that he prepared himself.

“I play from the heart, rather than from the head,” Shapiro said. “Music is the closest thing to a religious experience, and I am so honored to be able to learn my living this way.”

Shapiro said he believes music is more eloquent than words. Music, in his eyes, has the power to transform lives.

Kim Busic, one of Shapiro’s students, had nothing but sincere words to say about Shapiro.

“Mr. Shapiro has inspired me to become a better violinist and musician,” Busic said. “His knowledge of the violin is like no other violin teacher I have had. Without some of the philosophies and techniques he has taught me, I definitely would not be the violinist I am today.”

“I have watched Butler University over 28 years to transform itself into something extraordinary. I was the first person ever to be appointed to a full time musical instrument position,” Shapiro said. “The university continued to support that position with similar full time positions and I’m just happy to be a part of what is such a great music school. The entire campus has been transformed.”

Still, Shapiro believes that there is one thing about Butler that makes it stand out from every other institution that he has taught at.

“The thing I value most is that it’s the most nurturing place I’ve ever been a part of,” Shapiro said. “The faculty cares so much about the students. I was tumbleweed for many years, and when I came here it felt like home. And I’m just getting warmed up.”

Larry Shapiro will give his yearly recital at Eidson-Duckwall Recital Hall on Tuesday, March 31 at 7:30pm.