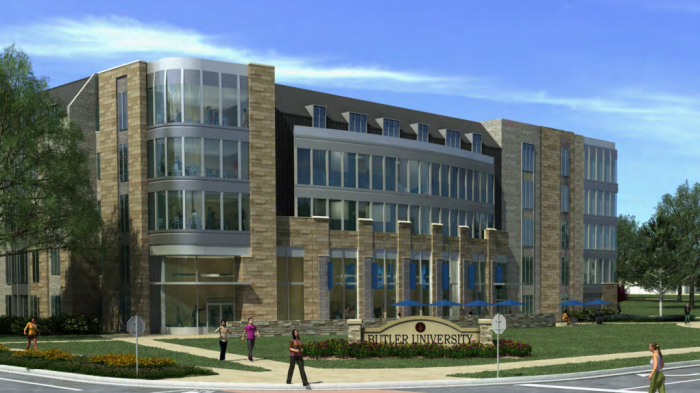 Over spring break, construction began on the new student-housing facility that is planned to open in 2016 as part of President James Danko’s 2020 Vision.

The Residential College parking lot behind the library was closed off, the trees were cut down, and construction crews have already begun drilling into the pavement.

The construction has caused various reactions from students who use the parking lot.

The blue region represents the new student-housing facility set to open in August 2016.

Junior marketing and MIS major Sarah Berk, a resident assistant in Residential College, said the timing of the construction is inconvenient to students trying to find a parking spot.

“It was hard to find parking before, but now it’s even harder because our B lot behind ResCo is really small,” Berk said. “So I was always behind Schwitzer (Hall) and now I drive around for 15 minutes and then end up parking behind Schwitzer. It’s just a bigger inconvenience.”

It has also become more difficult for commuters and visitors to find available places to park. The Hinkle Fieldhouse parking lot was designed with parking overflow in mind and the I-lot is available to any Butler parking pass, according to Butler’s website. But there are now fewer parking options available to visitors who are less familiar with campus.

“My boyfriend and my friends, when they come to visit me, they would park in the commuter spaces, and now they can’t do that either, which is really annoying,” Berk said.

Bill Weber, assistant chief of police, said when the new parking facility opens in the fall semester these issues will be addressed.

“I have my hopes and wishes like a lot of other people for the parking garage,” Weber said. “I would like to see faculty staff and commuters park in there—commuter students are going to come and go as opposed to a resident student, who might park there and not move for five days.”

Once the new multi-use parking structure on Sunset Avenue is complete, which will cost an estimated $23 million, 500 more parking spaces will be added to campus. Delegation for those spots have not yet been determined.
The housing facility will cost approximately $42 million after total development and finance charges, Levester Johnson, vice president for student affairs, said, according to a Collegian article published Oct. 29, 2014.