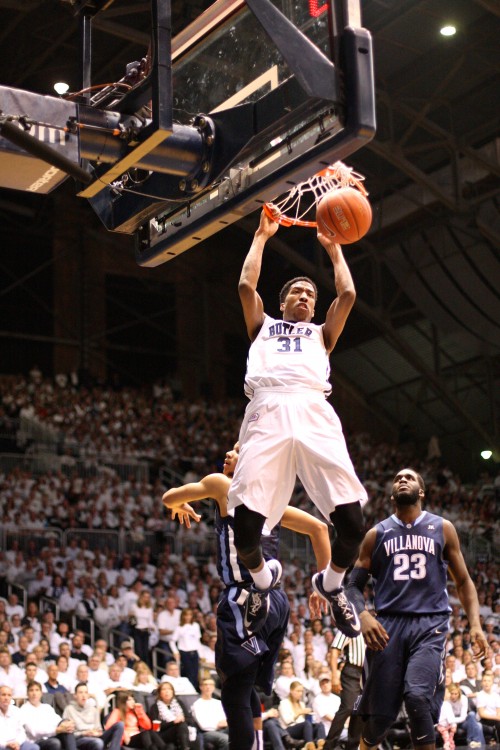 This is the third meeting between the Bulldogs and the Hoyas, but the second official Big East Conference game. Butler beat Georgetown 64-58 on Nov. 28 at the Battle 4 Atlantis in the Bahamas, while Georgetown came away with a 61-59 overtime win in Washington, D.C. on Jan. 17. Tonight’s tip-off is set for 7 p.m. on FOX Sports 1 from Hinkle Fieldhouse.

-The Bulldogs rebounded with two wins last week after being blown out 73-56 at rival Xavier on Feb. 21. The Bulldogs beat Marquette (73-52) at home on Wednesday and won at DePaul (67-53) Saturday.

-Kellen Dunham is hot as of late. He scored 22 against the Golden Eagles and 24 against the Blue Demons. He had a real tough outing against Xavier, picking up three fouls in the first half, leaving him to sit on the bench most of the game. But when he was back on top of his game this past week, the Bulldogs’ offense really started to click, albeit against two inferior opponents.

-The Bulldogs may get Andrew Chrabascz back tonight, even if it’s just for a very limited amount of minutes. He broke a bone in his right hand during a 68-65 loss against Villanova. If he has been good enough to get some light workouts in practice lately, he could see some limited minutes off the bench just for head coach Chris Holtmann to see how things are progressing.

-The Hoyas lost to St. John’s 81-70 Saturday after putting up three straight wins. Leading scorer D’Vauntes Smith-Rivera (16.9 PPG) did all he could with 29 points (tying his season high) and seven rebounds, but he didn’t get much help from the other four starters, as they combined for just 18 points. Senior center Joshua Smith had just five points and three rebounds before fouling out midway through the second half.

-The Hoyas’ offense runs through Smith-Rivera and Smith, combining for nearly 40 percent of the team’s points per game. Villanova did a good job defensively against Georgetown on Feb. 7, holding Smith-Rivera to just two points, and Smith to seven. When those two don’t score, the rest of the team struggles, and it showed in a 69-53 loss.

-Georgetown is 4-4 in true road games and 6-6 away from D.C., including four neutral court games this season.