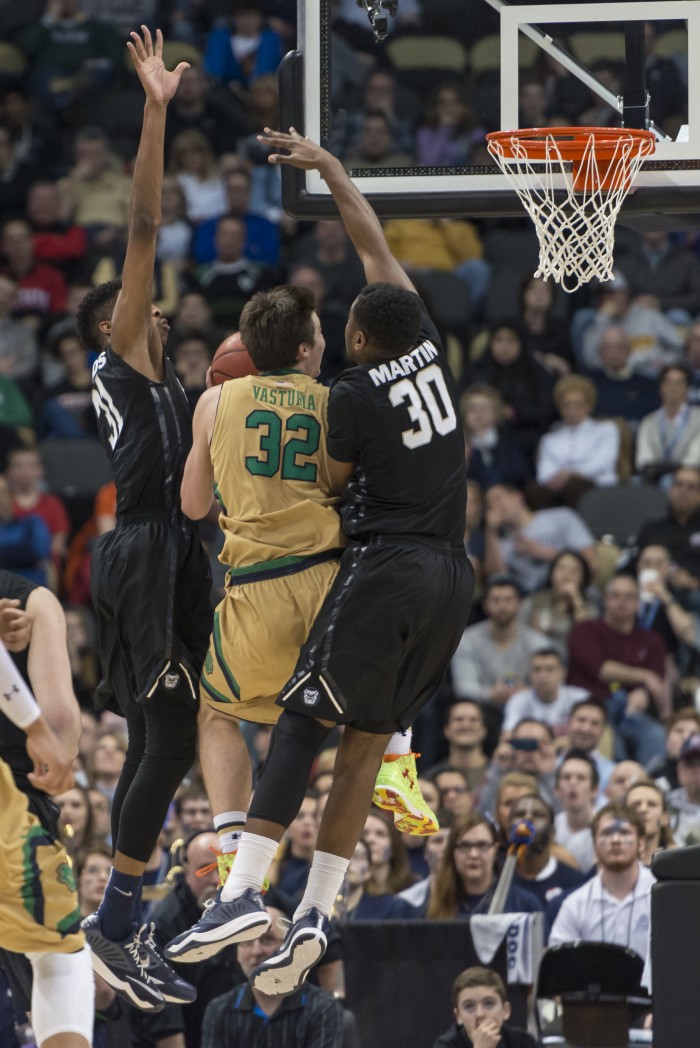 The season came to an end for Butler University’s men’s basketball team Saturday with a loss against in-state opponent University of Notre Dame in the third round of the NCAA tournament.

The Fighting Irish held off the Bulldogs 67-64 in overtime to advance to their first Sweet 16 since 2003.

Butler was just seconds away from advancing to its third Sweet 16 appearance in five years when Notre Dame senior Pat Connaughton came up with perhaps the biggest play of his career.

He came from behind to block Kellen Dunham’s three-point attempt that could have won the game.

Butler had one last try at a tip-in, but senior Kameron Woods’ attempt failed, and the Irish went on to outscore the Bulldogs 12-9 in the extra period.

However, it wasn’t unexpected by everyone, especially those on the team.

But head coach Chris Holtmann said the team had many significant accomplishments that cannot go unrecognized.

“To go from 4-14 to 12-6 in Big East play in and of itself is remarkable,” he said. “To be a six-seed in the NCAA Tournament and have a chance to play a team like Texas that people didn’t think we were going to beat, and beat them, was really special.”

“I think the biggest thing is, you’re really proud of the way our team competed the last two months of the year,” he said. “We were as good defensively late in the year as we have ever been, and that was really exciting to see us peak at the right time.”

Butler finished the season by winning nine of its last 12 games, and was 5-2 against ranked teams in the regular season. The only two losses came against eventual No. 1-seed Villanova. The Bulldog’s home bout with the Wildcats came down to a late three pointer by Darrun Hilliard.

One key player this season was junior Kellen Dunham, who led Butler with 16.5 points per game and just four games under 10 points, including the loss to Notre Dame. The Bulldogs were 1-3 in those games.

Another important team member was Roosevelt Jones, who sat out the entire 2013-2014 season with a broken wrist suffered during an offseason team trip to Australia.

Jones was second on the team with 12.7 PPG and 5.2 rebounds per game. He also led the team in assists with 3.7 per game.

Jones and Dunham will both be back next year for their senior seasons, but the Bulldogs will be without two starters — Alex Barlow and Woods, a combined 16.7 PPG and 13.9 RPG.

Barlow had just two points when he fouled out of the last game, and Woods had eight, with 15 rebounds. Dunham said it will be tough to overcome the loss of two leaders, but they are excited for yet another challenge.

“You know we’re not going to be able to replace [Barlow] or Kam because they are special players in their own aspects,” he said. “I think that we can all add a few more things to our game and not necessarily replace them, but aid as much as we can.”

Barlow doesn’t necessarily think he left the program in a better place, but feels he definitely left his mark.

“I think this senior class did a great job at leaving an impression and really helping this program just kind of take the next step forward.”

The Bulldogs will be hoping for their eighth NCAA Tournament appearance in 10 years next season. While they will have to achieve it without Barlow and Woods, Butler will be getting some help in the form of North Carolina State University transfer Tyler Lewis.

The Bulldogs are also bringing in recruits Nate Fowler and Sean McDermott.

While unlikely that those two schools will turn into the recruiting pipeline that is New Castle Chrysler High School — which has produced the likes of Zach Hahn, Chase Stigall, Brandon Miller, Bruce Horan and current walk-on Steven Bennett — it appears that the Bulldogs will be relying on them to replace two players who have been instrumental in the team’s recent success.