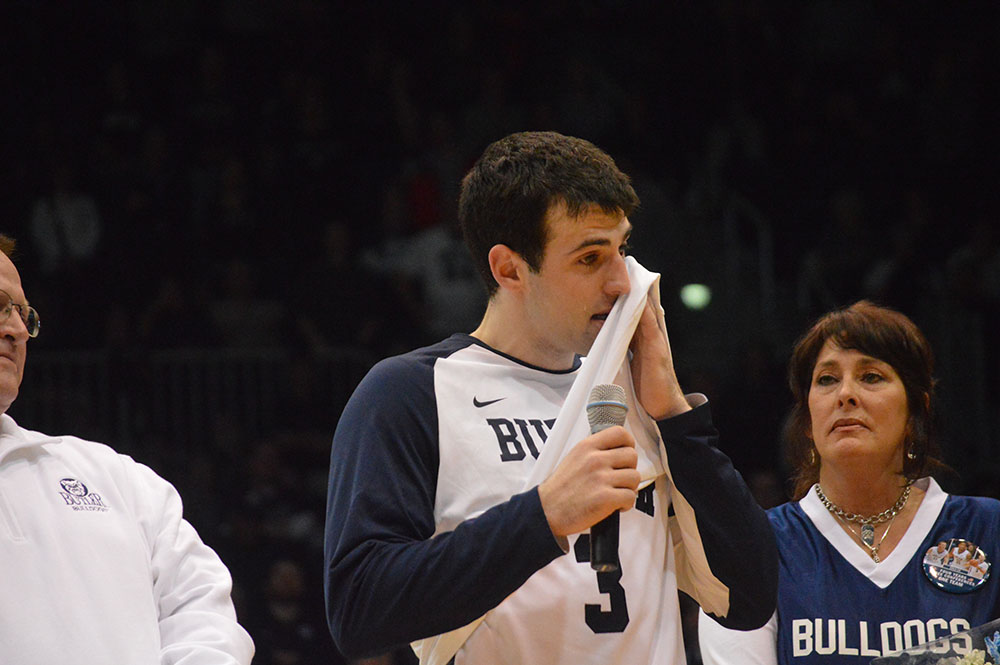 It was an emotional night as senior Alex Barlow dried his eyes while addressing a near-sold out crowd at Hinkle Fieldhouse.

Barlow and the Butler men’s basketball team came up short of a win on senior night Tuesday, falling to Georgetown University 60-54. The Bulldogs (21-9 overall, 11-6 Big East) are now in a tie for second place with Georgetown (19-9, 11-6), but the Hoyas hold a head-to-head tiebreaker, as they won both official conference games against the Bulldogs.

Barlow had 13 points, two assists, a steal, and countless hustle plays during his final home game that the Hinkle crowd applauded him for.

Barlow choked up while delivering his on-court speech, and Bulldogs fans showed him their full support with an uproar of applause.

“I want to thank the coaches and my teammates over the last four years,” Barlow said. “These guys welcomed me in when I first got here. None of them knew who I was, never had seen me play, and they welcomed me with open arms. So for them, I’m forever thankful.”

Woods had a team-high 15 points and 16 rebounds, his seventh double-double of the season.

Aldridge got his first start since his freshman year against Gonzaga, a gesture head coach Chris Holtmann said he was dead set on, even if it meant leaving leading scorer Kellen Dunham on the bench to start the game.

“I never gave it a thought,” he said. “These guys deserved the right to start, and I felt like that was kind of how we prepared to play.”

Aldridge, a native of Sydney, Australia, kept his post-game address to the fieldhouse crowd lighthearted, but took the time, as the others did, to thank teammates, coaches, and fans.

“We kind of joked the other day, I think we’re the only three players ever to go through three coaches, three conferences, so we’ve done it all,” he said, “we could probably write a book about college basketball.”

Aldridge made his last appearance in Hinkle a memorable one, despite the team’s loss.

“I think my family and I have to reciprocate the welcoming nation you guys have given us,” he said. “So if any of you are in Australia, hit us up. We’ll take care of you.”

The Hoyas got out to a 30-24 lead at halftime, shooting 57 percent from the field in the first half. Leading scorer D’Vauntes Smith-Rivera was held to just five points in the first half, but finished with a game-high 16.

Butler went on a 10-5 spurt over the first eight and a half minutes of the second half to take the lead 40-39. Dunham fueled that stretch with all eight of his points over two minutes.

Georgetown’s lead got to as many as five after that, but the Bulldogs cut the deficit to 54-52 with just over three minutes to play on a three-pointer by sophomore Andrew Chrabascz that sent Hinkle into a frenzy.

Chrabascz didn’t start, but he made his return after being sidelined with a broken bone in his shooting hand suffered during a 68-65 loss to Villanova on Feb. 14. He finished with eight points Tuesday.

“We weren’t necessarily going to limit his minutes,” Holtmann said, “but he needs to play because he needs to get some of the rust off from the past couple of weeks.”

Chrabrascz appeared to be shaking his hand in pain near the end of the game, but Holtmann said he doesn’t believe it was anything serious.

Before Barlow finished his on-court address, he made sure to tell Bulldogs fans that the season isn’t over.

“The atmosphere here is second to none, and I’m going to really miss playing here,” Barlow said, “but we’ve got a long season still ahead of us. Once again, thank you, and go Dawgs.”

The Bulldogs head to Providence Saturday for the final game of the season, still fighting for the No. 2 seed in the Big East Tournament. They will need to win that game, and have the Hoyas lose to Seton Hall Saturday in order to get that seed.

Tip-off is set for 12 p.m. at the Dunkin’ Donuts Center Saturday.