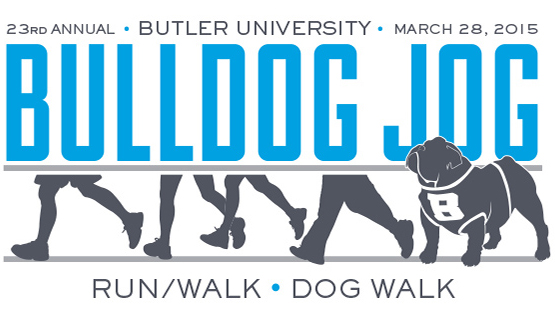 Hundreds of runners will take their marks at the starting line this Saturday for the 23rd annual Bulldog Jog.

The event involves Butler students, staff and members of the local community.

The event was originally organized by the Alumni and Parent Programs department as a fundraiser for the Butler University Student Foundation.

By 2011, the event had grown in size, so the foundation turned it over to the Department of Recreation.

All of the proceeds go toward Health and Recreation Complex student employees in their pursuit of professional development opportunities.

These opportunities include attending conferences and workshops and gaining certifications.

In the last few years, 40 students had these opportunities due to the proceeds from the event.

Scott Peden, director of recreation, is in charge of the Bulldog Jog this year.

“It is definitely a Butler-community coordinated effort,” Peden said. “This might be their one touchpoint for Butler.”

Around 95 percent of the participants are members of the local community.

Also important to the event are the 90 or so volunteers, most of whom are students.

They help with T-shirt pickups, registration, monitoring the course during the race and setting up and taking down equipment.

Aside from that, volunteers stand at the finish line and cheer on the runners.

The five-kilometer race begins at 9 a.m. at gate four of Hinkle Fieldhouse. The route goes south through campus and then turns west toward the canal.

After coming back up on the tow track, the race ends at the Butler Bowl.

The Dog Walk is about a mile long. Participants include dog owners with their dogs, including plenty of bulldogs.

As bulldogs are notoriously short of breath, owners contrive all sorts of scooters, wagons and other creative ways of towing around their pooches.

“That is probably the funnest part of the event for me,” Peden said. “To see all of these elaborate designs for carrying their bulldogs.”

The Dog Walk was added to the event three years ago.

It provides an opportunity to partner with the Humane Society of Indianapolis and the Indiana Bulldog Rescue.

Participants are encouraged to bring donations of pet food and supplies to distribute among these organizations.

The addition of the Dog Walk has proved popular. Within a few years of its inception, the number of dogs in attendance reached almost 100.

Likewise, the number of runners has increased from about 200 to 600 over the past four years.

However, Peden said, attendance is very much dependent on the weather conditions the day of the event.

The Bulldog Jog was pushed back a week this year, partly in the hope for warmer weather and partly to move it away from spring break.

Still, student participation is small, with only 100 students among the 600 runners last year.

Registration is still available online until March 25 and walk-ins are accepted on the day of the race.

The cost for Butler students is $10 and includes a T-shirt.

Complimentary refreshments will be provided courtesy of Whole Foods Market, and there are plans for a mobile coffee truck as well.

Although the race is not very competitive, medals will be given out for the first five male and female finishers.

All participants will be congratulated at the finish by the grand marshal of the event, Butler’s very own Trip.