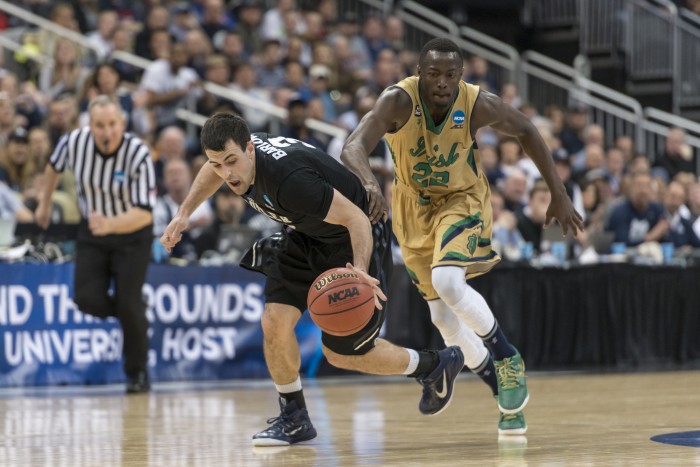 These are the four qualities needed to be a finalist for the Senior CLASS Award, given to NCAA Division I student-athletes in 10 different sports. It is an acronym for Celebrating Loyalty and Achievement for Staying in School.

Apparently, Butler University’s men’s basketball senior Alex Barlow has a pretty good combination of those four things going for him.

When fan ballots closed on Monday, Barlow had a sizeable lead.

While media and Division I head coaches also have input, it looks as though Barlow has a good chance of receiving the award next weekend at the Final Four, held at Lucas Oil Stadium in Indianapolis.

Barlow was a former walk-on at Butler, originally intending to learn under Brad Stevens with aspirations to become a college coach. But after hitting a game-winning shot to knock off No. 1-ranked Indiana his sophomore year and earning a scholarship, Barlow became a leader of the team.

Junior Kellen Dunham said Barlow not only has character on the court, but one off it as well.

“On the court, I think anybody who doesn’t really know him personally could say the same things I’m going to say,” Dunham said. “He’s tenacious, very hard working, goes out of his way for others, he’s always making the extra pass, does little things that win the game.”

Off the court, Dunham said, Barlow is a wonderful person.

“He has helped me out on numerous occasions where I’ve been seeking some help or seeking some knowledge or mentoring for me,” he said. “He is a role model. I look up to him in a lot of ways.”

Barlow is pretty qualified for the classroom aspect of the award, as well. As an honor student majoring in finance, he has won two consecutive Big East Scholar Athlete of the Year awards.

“He challenges me in the classroom,” Dunham said. “Seeing how well he does makes me want to do better.”

As for the the community aspect of the award, Barlow has been involved with dozens of community projects, according to seniorclassaward.com. One of those is the Stay Positive Foundation, which was created by Butler student Eric Day, a cancer survivor.

Barlow has helped to promote the foundation’s wristbands through Twitter.

“It’s a cause I believe has great intention,” he said. “He is a person who is really strong, someone who inspires me, and inspires others.”

“I think he’s a tremendous fan favorite,” he said. “Our fans love so many of our guys, and he’s a special kid, and so deserving of that.”

Barlow is the fourth Butler player to be named a finalist for the award in five years.

Matt Howard, Ronald Nored and Andrew Smith were finalists in three consecutive years from 2011 to 2013, although none of them won the award.

Barlow said it is humbling to be in the same company as those former players.

“They were all worthy candidates,” he said. “If I’m able to win it, I think that would be something cool, something I would be able to have for the rest of my life. I know my family and friends have done a lot of work and spent a lot of time trying to get people to vote for me.”

Barlow was named one of 10 finalists from a field of 30 candidates.

He is one of three finalists from the Big East. Xavier University’s Matt Stainbrook and D’Angelo Harrison of St. John’s University were also named finalists.