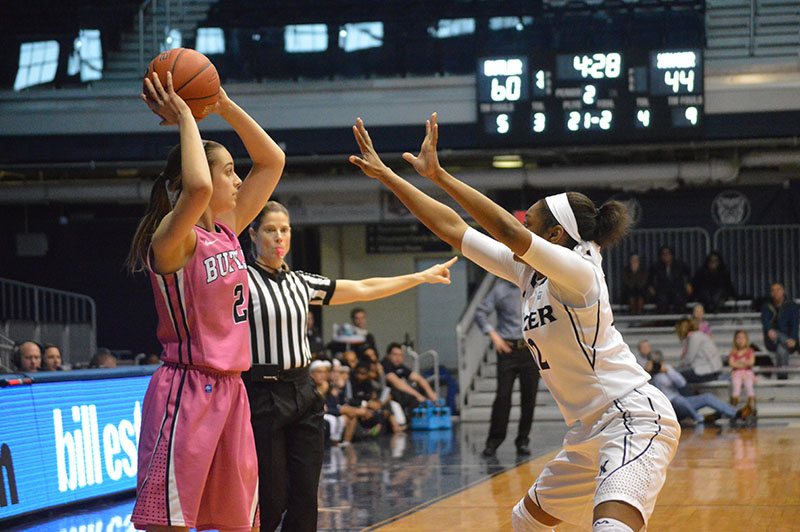 The Butler women’s basketball team made it back-to-back victories this weekend with a victory over rival Xavier University at Hinkle Fieldhouse, and now has just two games remaining in its regular season, each of which will be played over the coming weekend.

The victory put the Bulldogs into a three-way tie for third place in the Big East standings going into the final weekend of play before the Big East tournament.

Butler will have the opportunity to break that tie on Friday night when they host St. John’s University, who is also one of the teams sitting at 10-6 in conference play.

In their first meeting this season, the Bulldogs won 55-50 at St. John’s in a game that was nationally-televised and came down to the final minute. St. John’s was led by 27 points from Alliyah Handford.

Handford, along with Danaejah Grant, give St. John’s a potent 1-2 punch as two of the top three scorers in the league, at 20.3 and 17.6 ppg, respectively. The Red Storm also feature the league’s leading rebounder in Amber Thompson, who averages 11.2 per game.

On Sunday, Butler will battle another team near them in the standings, the Seton Hall University Pirates. Seton Hall (24-4, 13-3) enters the game ranked No. 25 in the country in the USA Today Coaches Poll.

In the first meeting between the two, the Bulldogs took Seton Hall down to the wire before falling, 75-70. That game saw both Loryn Goodwin and Ijeoma Uchendu record double-doubles.

The Bulldogs will be looking to utilize the final weekend of the season to improve their seed for the conference tournament and to build momentum for the win-or-go-home mentality they will have to take with them.