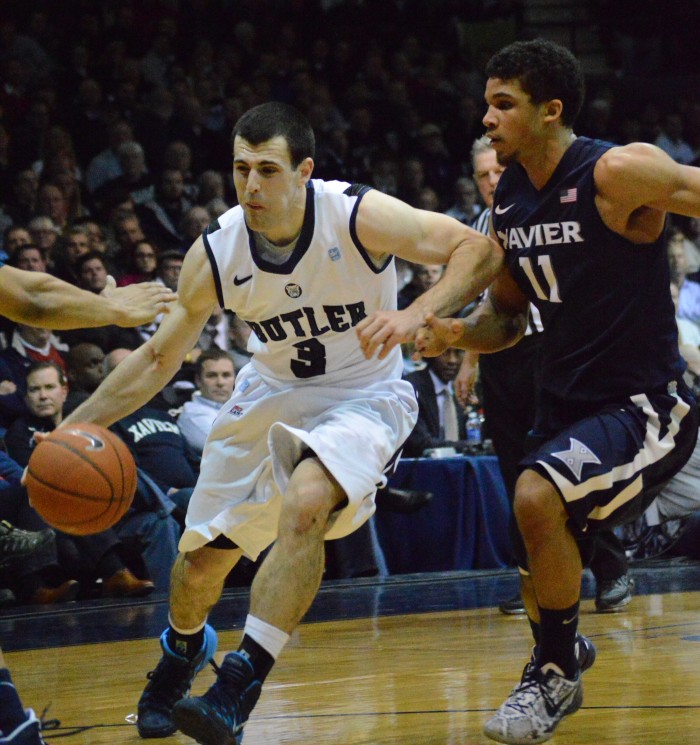 The Butler University men’s basketball team is back on track after junior Roosevelt Jones hit a late floater to beat Creighton University 58-56 Monday night. The Bulldogs now turn their focus to a familiar foe — the Xavier University Musketeers.

Xavier is Butler’s top Big East rival in terms of number of games played. The Bulldogs are 17-33 all-time against the rival Musketeers, having won the 50th meeting 88-76 on Jan. 10 at Hinkle Fieldhouse.

But this one goes deeper than the numbers.

While the Musketeers hold the clear advantage in wins and losses, Butler does hold a clear 2-0 advantage in Final Four appearances.

The series then took a 36-year hiatus, and that’s when the rivalry really began to develop, with Xavier beating Butler 66-60 in overtime in 1976.

The Musketeers and Bulldogs played alongside each other in the Midwestern Collegiate Conference — which later became the Horizon League — from 1979 until 1995.

During their time in the MCC, Xavier held a 10-22 advantage over Butler. The longest win streak in series history came during that stretch, with Xavier winning seven straight.

Soon after Xavier left the MCC for the Atlantic 10 Conference in the 1995-1996 season, the series again saw a hiatus.

Butler beat No. 14-ranked Xavier 74-65 in December 2008 after a 10-year break. The next meeting would bring much drama and add fuel to the fire of the rivalry.

“It’s obviously something that took a bunch of years off and kind of got rekindled, probably by that game, more than anything else,” Stevens said.

Hayward made a go-ahead layup with 1.2 seconds left on the clock following a scrum for a loose ball. But upon review, the officials noticed that the clock stopped for a short period of time when the ball went in the back court and it should not have.

Officials had to put the video replay to the test of a stopwatch to make a final ruling.

Mike Freeman, associate athletic director for external operations,  was on hand at that game and was called on to go retrieve a stopwatch when they discovered there was not one at the scorer’s table.

“The table crew is supposed to have one, but of course, when you need one, we didn’t have one there,” Freeman said. “So I was the one who had to run and get a stopwatch.”

Freeman’s search for a stopwatch brought about quite the interesting story.

“So I went to our weight room, because I figured I would be able to find one there,” Freeman said. “And while down there, I was scared half to death by our strength and conditioning coach’s dog. He was down there sleeping and I woke him up, so I am not sure where I got the stopwatch from, but I somehow grabbed one and got back up there. “

After the review, the officials ended the game, and Xavier players and head coach Chris Mack went ballistic. Players had to be restrained from going into the crowd after heckling Butler fans, while Mack was occupied with yelling at the officials.

Indianapolis Star reporter David Woods wrote about the incident in his book “Underdawgs: How Brad Stevens and Butler University Built the Bulldogs for March Madness.”

After the players were escorted off the floor, as Xavier player ripped a drinking fountain off the wall in the hallway outside the visitor’s locker room, according to Woods’ book.

Xavier administration made an apology and offered to pay for the damage done, Woods wrote.

That game was just one of 13 games in the series decided by one possession. Twenty-seven of the series’ games have been decided by 10 points or fewer, and Saturday’s matchup in Cincinnati has the potential to be number 28.

It was the first time all season that Xavier lost a game by more than four points.

The Musketeers have a week full of rivalries as they face crosstown rival University of Cincinnati (17-8) tonight. They are coming off a 78-70 home loss against St. John’s University Saturday.

Senior Alex Barlow, an Ohio native, grew up as a University of Dayton basketball fan and remembers going to Dayton-Xavier games. He compared his career to watching the Flyers and Musketeers rivalry.

“I had many years of watching Dayton lose at Xavier,” Barlow said. “They haven’t won a game there since 1983, and I haven’t won one in my first two tries there, either.

“So for my family and I, it has been a long time since we have seen our college team there, so it’s kind of added a little bit extra for me because I know the history of Xavier and how hard it is to win there.”

The Musketeers sit two and a half games behind second-place Butler and just a half-game ahead of DePaul, who is in seventh place — the top six teams in the conference get a bye into the quarterfinals of the Big East Tournament.

Bulldogs minus a starter

Sophomore forward Andrew Chrabascz had 19 points and five rebounds in the game in January but the Bulldogs will be without him this time around after he broke his wrist in a 68-65 loss against No. 6 Villanova Saturday. He started every game for Butler and is estimated to be out two to four weeks.

Senior Kameron Woods said Monday’s win over Creighton was a confidence-builder to know they can win without Chrabascz on the floor.

“(Monday’s) win was a big one, especially because it was a quick turnaround after an emotional loss, and hearing the news that you’re going to lose a teammate for a while,” Woods said. “There was a lot of emotion going into that game, so in that respect, it was a big win for us.

He said he expects, like any other year, Saturday to be a big battle in a hostile environment.

The Musketeers are 12-2 at the Cintas Center this season. Their first home loss was a 79-72 overtime game against Creighton on Feb. 4.

Tip off is set for 2 p.m. on Saturday on FOX Sports Net.