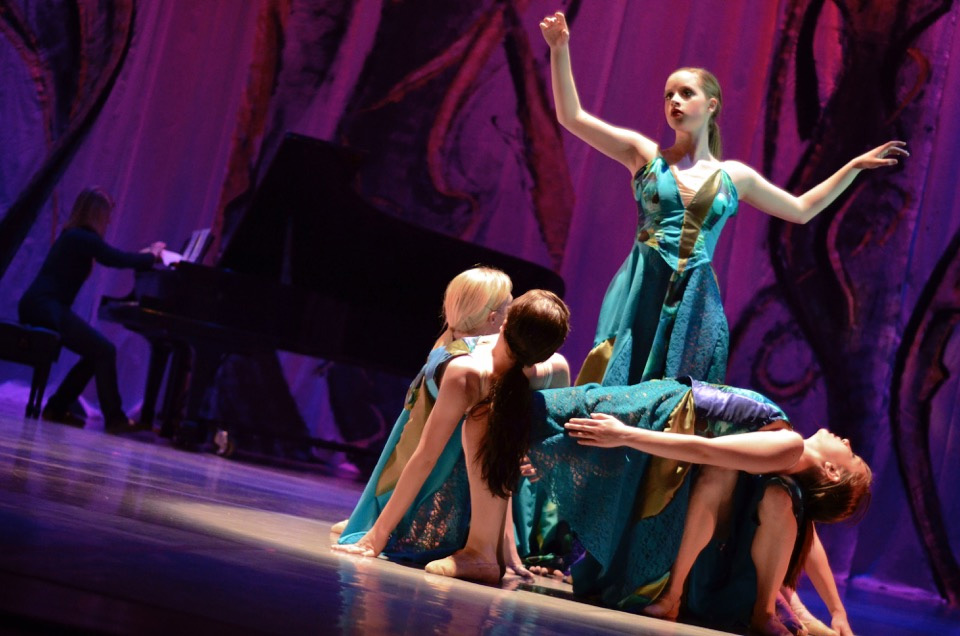 When Hollis Mackintosh stepped onto Butler University’s campus 13 years ago, she felt she was at home.

She graduated from Butler in 2002 with a bachelors of fine art in dance performance and an additional degree in arts administration. She is a native of Deansboro, a small town in upstate New York.

In the fall of 1998, Mackintosh traveled to Indianapolis to pursue her dreams of becoming a professional ballerina.

“I mean it [my time at Butler] was incredible,” Mackintosh said. “Just those four years were so incredibly influential.”

Since the age of 2, Mackintosh has been in love with the world of ballet. She auditioned for three dance schools upon graduating high school. She ultimately became a Bulldog.

She said Butler had a great reputation as a dance school with a good success rate of putting dancers into a professional company.

“The school was small enough where I didn’t feel I would get lost there, but it was big enough I felt like you could experience a lot,” she said.

Once college came to an end, Mackintosh went on to dance in several professional companies, including Louisville Ballet, Cincinnati Ballet and Augusta Ballet. After some time dancing, she chose a different career path.

“It had never occurred to me that there would have to be something other than a professional dance career,” she said. “That was my goal and that was why I went there, but it just did not occur to me that I had to think about what happens after that.”

Annie Johnson, a junior dance-performance major at Butler, said she could relate to pursuing a professional dance career.

“Dance is such a competitive field,” Johnson said. “If you get an injury it could ruin your career, so it is always good to have a back-up plan.”

Mackintosh hung up her pointe shoes in 2008 to become the director of Northern Plains Dance, a dance studio located in Bismarck, North Dakota.

Mackintosh said her experience in North Dakota turned out completely different than she expected.

“My biggest accomplishment since graduating is definitely what I have done here,” she said. “It wasn’t where I thought I was going to end up, but it was the hand I was given, so I made the best out of it.”

While Mackintosh studied during her four years, one dance professor stood out among the rest: Michelle Jarvis, the Jordan College of the Fine Arts associate dean. Mackintosh said Jarvis was the first person to show her there can be dance without drama.

“I just remember thinking that she knew everything and was so—she was so professional about everything,” Mackintosh said.

On the morning of Sept. 11, 2001, during her senior year, Mackintosh sat in Jarvis’ teaching analysis class. Spelling tests were being passed out with teddy-bear ballerina stamps on them.

As word got out about the two airplanes that struck the twin towers of the World Trade Center, Mackintosh said Jarvis reacted with compassion and calmness.

“She said, ‘I think all of you should go home,’” Mackintosh said. “This [test] seemed to be important yesterday, and today—it just isn’t important today.”

Jarvis’ professionalism and work ethic inspired her. Mackintosh said she hopes she can one day be her student’s very own “Ms. Jarvis.”

Maddy Peterson, a senior dance student in Bismarck, has been dancing at Northern Plains Dance for 14 years—much of that time under the direction of Mackintosh.

Peterson said she looks up to her ballet teacher and considers her a great friend.

“I just think of all the times I am able to talk to her and have her be there as a role model and mentor,” Peterson said. “I think that the advice she has given me is something that I am going to carry with me for a long time.”

Prior to Mackintosh’s arrival, Peterson said the dance studio was laid back and did not have a professional setting.

Mackintosh said the best part of teaching her students is watching a light bulb go off when they do something correctly.

“I love watching the pride that people have in themselves,” Mackintosh said. “It is completely internal, not because they got a round of applause or a trophy. It is because they have done something that they weren’t sure they could do before.”

Even through sweat, blisters and long hours of ballet rehearsals, Peterson said she is grateful for the guidance of her ballet instructor.

“She gives a lot of tough love sometimes that I don’t always like, but when I am able to reflect and look back on it, I know that is exactly what I need to push me further,” Peterson said.

Looking back on her four years at Butler, Mackintosh said she would not trade it for the world.

“I think it was really worth it,” she said. “It is a time to just completely explore and redefine yourself,”

Mackintosh sees herself continuing to make as big of a difference in her community as she can. She dreams one day there could be an arts center in the capital city of North Dakota.

“It’s got to be up to someone else to make a difference,” she said. “In my long-term goals, I see that as me.”