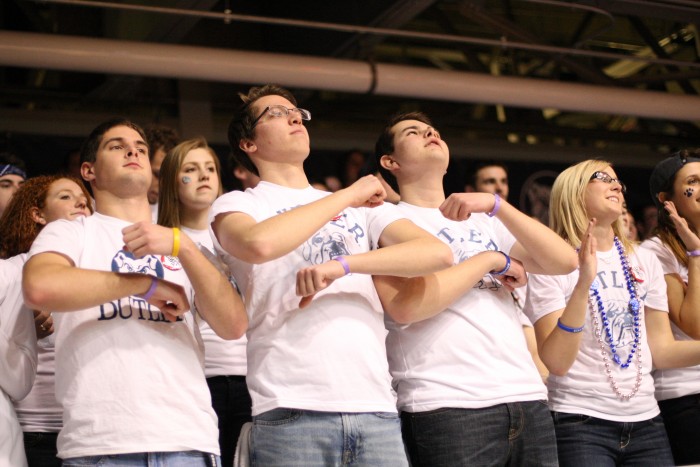 The Butler men’s basketball team played what was arguably its most anticipated home game in at least a year last Saturday.

Butler entered the game ranked No. 18, while Villanova University came in at No. 6. The numbers alone made it clear this was going to be an exciting match-up, not to mention the fact that both schools had first place in the Big East on the line.

Viewers could feel the energy as they walked into Hinkle Fieldhouse. The entire building felt electric. The cheerleaders and dance team members led the way by providing cheers and chants throughout, while the players came through with an exciting performance.

The sea of white was incredible, ranging from Dawg Pound members to the season ticket holders who have held the same seats for decades. It was a marvelous sight to see.

Freshman Lauren House said she was excited to see the incredible amount of white. She expected it to just be a student scene, but she was pleasantly surprised to see the entire fieldhouse participating.

“The spirit was undeniable,” House said. “I have never seen this amount of excitement during my time here. It was really exciting to be a part of, and I was so proud to be able to say I was a Bulldog.”

House, along with many other students, participated in Dawg Pound, which was on its feet for the duration of the game. You could tell the students were pulling for their fellow classmates to pull out this upset.

Unfortunately, the Bulldogs lost a tight one, 68-65.

The Wildcats’ Darrun Hilliard hit a game-winning three-pointer with 1.5 seconds to play, scoring a game-high 31 points in the process, a career best for him.

But despite this unfortunate loss for Butler, this game will be one to remember.

For some, attending the game was just another excuse to get together with friends and showcase some Butler spirit. For others, it was a chance to see a thrilling basketball game.

Luckily for me, I not only got to be with friends, show some spirit and watch a great game, I also made my first appearance on CBS as a member of the Dawg Pound.

The highlights from the game accurately depict the overwhelming energy that was present the entire night.

As Butler students, we must take this as a lesson learned. In recent games, Butler’s student section has been accused of being less than enthused, but I have faith that Saturday renewed the fire in all Butler fans’ hearts.

Students were reminded that, win or lose, we are all here to support one another. Being part of the fieldhouse atmosphere on a weekly basis, and for free, is a privilege.

After Saturday, you would have to be crazy to ignore our Bulldogs. They are a force to be reckoned with and a contender among the best teams in the country.

So, I challenge you to use this game as your inspiration to attend every game you can. Show the same spirit we had this past Saturday, whether we are playing the sixth-ranked team or an unranked one.