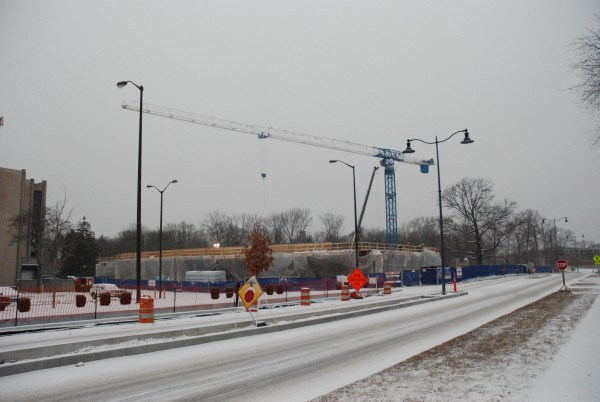 Drive down Sunset Avenue and witness the giant blue construction crane hanging from the sky. Piece by piece, a parking garage is being built, set to open this August.

From dawn until dusk, construction workers are on the site building the pillars and foundation, even in the unpredictable Indianapolis winter weather.

He said the garage will be finished in August. The retail spaces that will occupy the first floor of the building will lag behind.

The plan, he said, is to start working on the retail spaces early in the summer and have everything completed by early October.

“This was something we had to do to address our parking issue on campus and I think it is a good thing,” Michal said.

The parking garage will have five levels, over a thousand spaces and 15,000 square feet of retail space on the first level.

The north portion is 9,000 square feet and the southern portion is 6,000 square feet, Michal said. Each side will be divided by a passageway, split in the center, that gets people from the sidewalk into the parking area.

There are now 10 letters of interests from companies who could potentially lease the available retail space including pizza, sandwich shops and sit-down dining options.

Michal said a survey signed by Ben Hunter, chief of staff, was distributed Feb. 3 via email to members of the Butler community, including students, faculty and staff, asking individuals to participate in the retail selection process.

“As a valued member of the Butler community, your feedback is important to us,” Hunter said in the email to current constituents. “Please take a few moments to respond to our survey, which will help us to choose retail partners for the new facility.”

The survey was open to responses until Feb. 10.

Survey distributed by Ben Hunter, chief of staff and chief of Butler police.

Junior Devon Lakes, a resident assistant in Ross Hall, said he thinks the garage is being built in a reasonable time.

“The garage has been going pretty fast, I think,” he said. “I am pretty satisfied with where they are at so far. The fact that they are already building the foundation is really awesome.”

Lakes took the survey that was offered to all Butler students concerning the retail space. He said he felt some of the options on the survey, such as retail space for a clothing store, were unnecessary.

In the end, Lakes said he hopes the feedback will be taken seriously. He said a late-night food option and pharmacy would be beneficial to campus, especially students.

“With the space that we are building, we need to maximize everything we need out of it,” he said. “The parking garage can answer a lot of the problems that Butler faced when it comes to parking, food and health.”

Sophomore Hadeel Said is a commuter student. She said she leaves and returns to campus multiple times during the day to attend all of her classes and fulfill her obligations.

Said said progress with the parking garage construction is slow but understandable. She said she is concerned with future parking related issues concerning major events at Clowes Memorial Hall.

“It is slow and it is causing a lot of chaos and dysfunction,” she said. “I am looking forward to it being done, really.”

Though Said said she does not usually take surveys, she responded to the survey issued by Butler.

She said additional food options would be especially beneficial for her and other commuter students.

“For someone like me, a commuter, I don’t have a meal plan,” she said. “I need to drive off campus to go somewhere to eat. So if they had somewhere to eat here that I liked, I would definitely go there.”

Michal said Butler has enough capacity during the academic day to meet parking demands. The challenge is having enough supply during big events such as basketball games at Hinkle Fieldhouse and events at Clowes and the Howard L. Schrott Center for the Arts.

“We want the parking garage to be high quality to make a good first impression of campus,” Michal said. “We want it to be functional to serve the day-to-day faculty, staff, community, and then also those peak usages during those big events.”

“Overall, I think if you paid for a parking tag, you should be able to have a guaranteed spot,” she said. “Especially for a commuter that is driving half an hour to 45 minutes everyday. I think it is important that that is taken into account.”

A computer rendering of a finished mixed-use parking garage.

Lakes said he thinks Butler’s parking has worsened since his freshman year because of the construction, but he believes the university is handling the situation as best as it can.

“A lot of people think tuition is so high that Butler can just build a brand new parking garage within a short amount of time,” he said. “It is a big project for a school that does not have a huge endowment. So the fact we are getting a parking garage is pretty amazing by Butler.”

Michal said although the parking garage is expensive for the university in the short-run, it will pay dividends in the future.

“I would argue that I would spend a little extra money on structured parking than to pay and put surface parking on other parts of our campus,” he said. “We can’t afford that big picture, long term. We’ve got too beautiful of a campus, and we need to preserve and protect that.”

Commercial space, the passageway, entry and exit lanes shown in this blueprint from an aerial view.