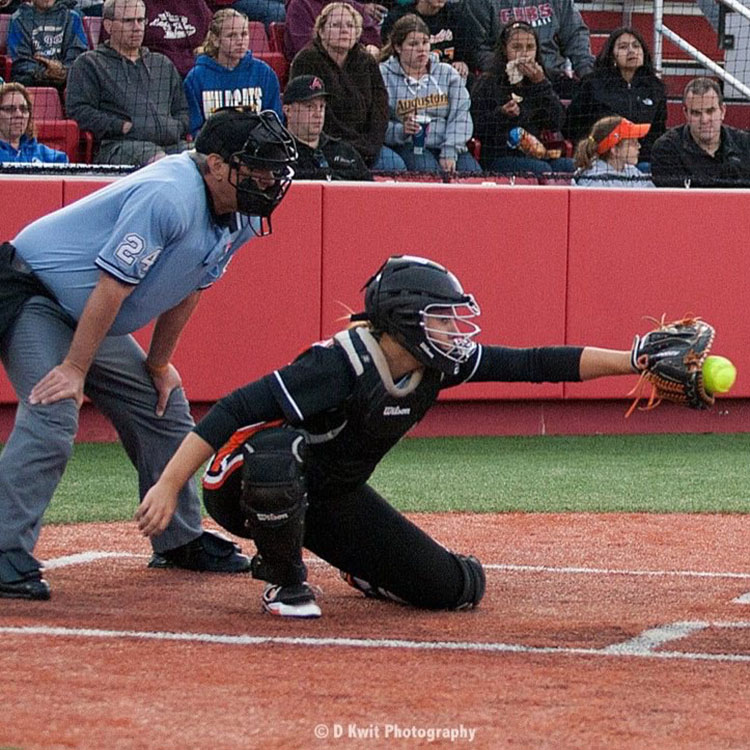 Jenna Grim works in her first year as an assistant coach with the Butler softball team.

The Beecher, Illinois, native is a former softball player herself. She played collegiately at Loyola University Chicago, a former Horizon League foe of the Bulldogs.

She then played professionally for the Chicago Bandits of the National Professional Fastpitch (NPF).

Grim said her friends give her a hard time when the Bulldogs face her alma mater, as they did in the season opener. But she said she was pulling for her new team.

Loyola got the best of Butler, coming away with a 6-5 win at the Rosemont Rumble Feb. 6.

“Everybody knows I want to win and I give everything I can to the people that I am influencing the most, and that is my team right now,” Grim said. “It’s the ‘Dawgs’ here, and they are a really great team. They work really hard, so that is all I can ask for.”

Grim said she sees the Butler softball team as “her girls,” and she has the intentions of showing them that she desires the best for them.

Grim said she would never ask team members to do something she would not do herself.

“I am never going to ask them to go move a mountain, but if you have the right mindset and you think that you can move the mountain, it is pretty powerful, and the mountain is going to get moved,” she said. “If coach [Scott Hall] and I can’t do something ourselves, we really don’t teach it, or if we don’t have a reason behind why we are teaching something, we are never going to teach it.”

Junior first baseman Alex Kotter says Grim’s relatability is what has helped her to connect with her coach.

“She has definitely helped me,” Kotter said. “There’s some things our main coach, Scott Hall, says that just don’t quite click but she’ll reiterate in a different way that just makes it so much easier. They work well together.”

Grim said she has had a very wonderful experience through the times that she has played. She said she is grateful to be able to pass her knowledge and instruction on to her current players.

“I am never going to do something that I don’t set my whole heart to,” Grim said. “If I’m kind of just part way in it, I’m not going to be in it at all. It’s not fair to myself and it’s not fair to the people I’m surrounded by,

Throughout her years as a player and now a coach, her passion for the game has stayed strong.

“I’ve been blessed with really great teammates and really great coaches that have made my experiences pretty awesome,” she said. “I’ve never lost my love for the game.”

The Bandits won the 2011 Cowles Cup, the NPF Championship in her first season on the team.  Looking back on her experience with the Bandits, Jenna remembers the first impressions that two legendary players —  Monica Abbott and Vicky Galindo —  left her.

“One of my favorite memories was winning two state championships in high school,” Grim said. “But I think a very special part of my career was making the pro team in Chicago. Getting on the bus to go to my first pro game and sitting next to two people that have won gold medals in the olympics, that was pretty surreal,”

Grim, who hit 31 home runs in her college career, was the first softball player from Loyola to ever play professional softball. She said she was welcomed very kindly by Bandits players.

“As soon as I got onto the bus, they started a conversation right away,” she said. “It was awesome and they were very accepting, very great people, and very welcoming to me being on the team.”

Junior pitcher Kristin Gutierrez said she sees how Grim has been able to use her experience to help the Bulldogs get better. Grim was a catcher, and has been able to relay her knowledge to Butler’s catchers.

“I think our catchers have benefitted a lot from that, but she has seen a lot of the great players,” Guttierez said. “She knows how to play to that level, so she can bring in new drills and new ways of thinking and focusing to be able to step up our playing, and be able to get up to that level that she played at and experienced.”