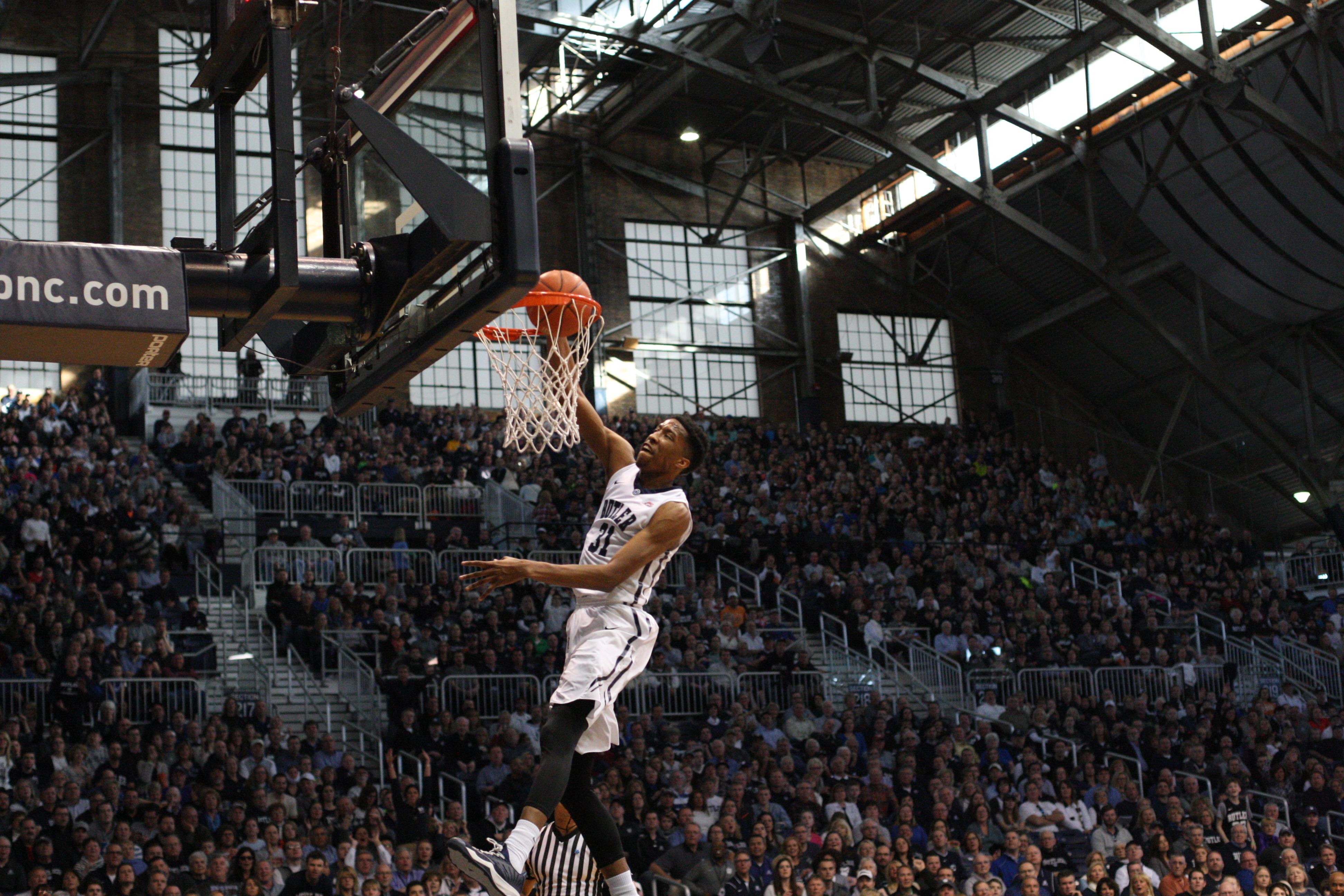 The stage is set. It is mid-February, the NCAA Tournament picture is beginning to take shape and the top two teams in the Big East will face off Saturday night with the top spot in the conference on the line.

The No. 18-ranked Butler men’s basketball team hosts No. 6 Villanova University at Hinkle Fieldhouse Saturday at 6 p.m., a game many did not think would be as high-profile as it is.

The Wildcats (21-2 overall, 8-2 Big East) were picked to win the conference in the Big East preseason coaches’ polls, while the Bulldogs (18-6, 8-3) were picked to finish in seventh place.

Villanova was the unanimous choice to win the conference, while Butler was tied with Marquette, just three points ahead of the ninth-place spot.

Butler is riding a five-game win streak after an 83-73 home win over DePaul University Saturday.

The win left Butler alone in second place in the Big East standings, just one year removed from the school’s inaugural season in the conference, when the Bulldogs went 4-14 in league play, winning just two road games.

A Wildcat victory at Providence College tonight would mean the Bulldogs will be playing for a first-place tie Saturday, but if Villanova loses tonight, that means Saturday’s winner will be in first place outright.

Saturday’s game, which is sold out, is being promoted as a “white-out,” asking all Butler fans to wear white.

The University and the Dawg Pound are teaming up with local t-shirt company 19nine to help with the white-out. The company is selling “Butler Vintage Tony Hinkle” shirts featuring a throwback Butler Bulldog logo.

Shirts are available on the company’s website and at the Hinkle Fieldhouse Spirit Shop.

Junior Kellen Dunham shoots a three-pointer during an 83-73 win over DePaul Saturday at Hinkle Fieldhouse.

Junior guard Kellen Dunham — the reigning Big East Player of the Week after scoring a game-high 24 points against the Blue Demons — said the white-out is just part of the buzz surrounding the game.

“It is going to be great,” he said. “The atmosphere is going to be fun to see the whole white theme, and obviously, our fans are going to be psyched because [Villanova is] ranked highly, too.”

Butler is 12-1 at Hinkle Fieldhouse this season.

Head coach Chris Holtmann said the hype around the game isn’t just because the two teams are ranked. The Bulldogs did a lot to put themselves in this position, but it has importance beyond just Saturday.

“Our guys have earned this opportunity,” he said. “It is a long way from the end of the conference season, but they have positioned themselves in a good place. So let’s enjoy it.”

Holtmann said he recognizes Villanova as one of the country’s elite teams.

“I think they are a Final Four contender,” he said. “They are physical, they are tough, they get 50-50 balls. They are very good defensively. They really bothered us.”

Butler has a full week to prepare for the Wildcats after Saturday’s win over DePaul (12-13, 6-6).

Villanova beat Butler 67-55 in Philadelphia on New Year’s Eve. The Bulldogs shot 42 percent in the first half, trailing by just four points at halftime. They went cold in the second half, though, starting the half 2-of-15 from the field.

Dunham attributed the poor shooting to the Wildcats’ defense.

“They are very good defensively,” he said. “But it is also a knock to us that we need to work on our screening and pass the ball a little more efficiently so we can knock down shots.”

Knocking down shots wasn’t a problem for the Bulldogs against the Blue Demons Saturday. They made 12 of their first 16 shots and shot 57 percent on the day.

Dunham said he again expects the focus to be on the team’s shooting Saturday night.

“I think it will be a little bit different of a game, just because they are different teams,” he said. “But I think the key Saturday will be, are we going to bring our A-game, tough game, or are we going to come in with our B-game? That is the difference.”

Holtmann said they will have to bring a better offensive game Saturday in order to find themselves in first place Sunday morning.

Saturday’s game will be televised on CBS Sports Network and is one of three matchups between ranked teams that day.

It will be Butler’s sixth game against a ranked opponent this season. The Bulldogs are 4-1 in such games.