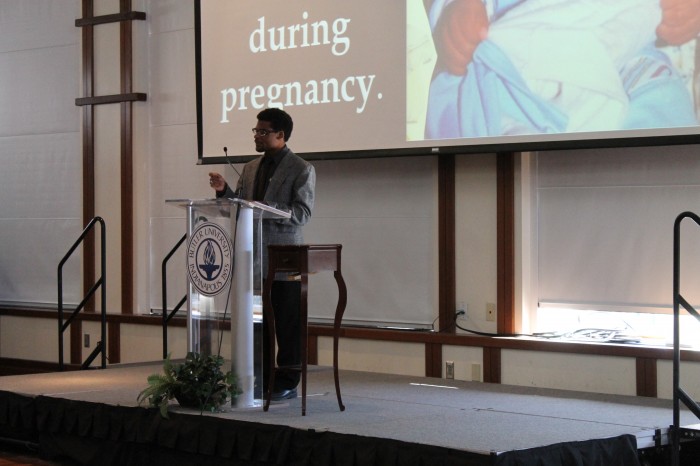 The Reilly Room’s walls were littered with photos of celebrities. Their faces were covered with a small sticky note indicating what disability they have.

Those in attendance were given name tags with different labels such as “dork,” “arrogant” and “sleazy.” Those tags became their wearers’ identities for that hour. They were instructed to think of themselves as that label and nothing else.

Students filled the Reilly Room in Atherton Union to hear different perspectives from people with disabilities.

“We were put on this earth to realize the extraordinary potential within us,” Parker Mantell said over the microphone to the audience.

Mantell graduated last year from Indiana University Bloomington and gave a student commencement address that went viral on the Internet. Mantell overcame his stutter during that speech, just as he did when he spoke at Disable the Label this past Sunday in the Reilly Room.

Mantell used an analogy to describe life with a disability. He said it was similar to having square pegs made for a round hole. The environment does not always suit their needs.

However, he urged the crowd to not cut the peg down to fit the hole, but rather widen the hole to begin with.

This was the theme during Disable the Label. The audience was asked to rid themselves of common social stigmas associated with different disabilities.

Individuals are not defined by their perceived limitations, Mantell said. Four other speakers related their own personal stories about overcoming a disability and achieving more than they thought they could.

Senior chemistry major Ryan Mughmaw organized Disable the Label at Butler. Mughmaw’s mother was a special-needs teacher and he said her students helped shape his perceptions on people with disabilities.

Brothers Michael and Andrew Peterson are athletes who overcame fetal alcohol syndrome. Michael sang his favorite song “Get It Right” from the television show Glee. The lyrics flashed up on the screen as he sang them, detailing the struggle between failure and success that both brothers faced. Andrew spoke of his cross-country coach and other peers that doubted his ability to run.

“So many people still focused on what I couldn’t do,” Andrew said. “I showed them and went on to earn four varsity letters.”

Despite those who doubted him, Andrew received support from his speech therapist. He said she believed in his abilities and pushed him to practice his speaking. “She was just one person, yet she made a huge difference in my life,” Andrew said.

Another speaker, Kelley Schreiner, handed out small cards before the event. One side read “words hurt” under a circle with an “R” and a line through it, while the backside said, “when you use words like ‘retard’ and ‘retarded’ it hurts people with disabilities. Please choose your words carefully. Use ‘respect.’”

Schreiner has handed out over 50,000 of these cards between herself and her family members. She told the audience to hand the card to people when they use the word ‘retarded.’

Kat Muir spoke after Schreiner about autism, giving her “Insider’s Guide to Autism.” Muir was diagnosed with Aspergers and obsessive-compulsive disorder when she was 21 years old. Despite her diagnosis, she received her master’s in pathology and is fluent in more than three languages, among other achievements. A video Muir made depicting what life was like with autism was featured on CNN.

Mughmaw was pleased with the attendance for Disable the Label. More than 250 people filled the Reilly Room in support of the cause.

Mughmaw hopes that Butler students will take what they have learned at Disable the Label and spread it across campus.

“If every Butler student reached out to one person with a disabilities,” Mughmaw said,  “think of the change that would occur.”