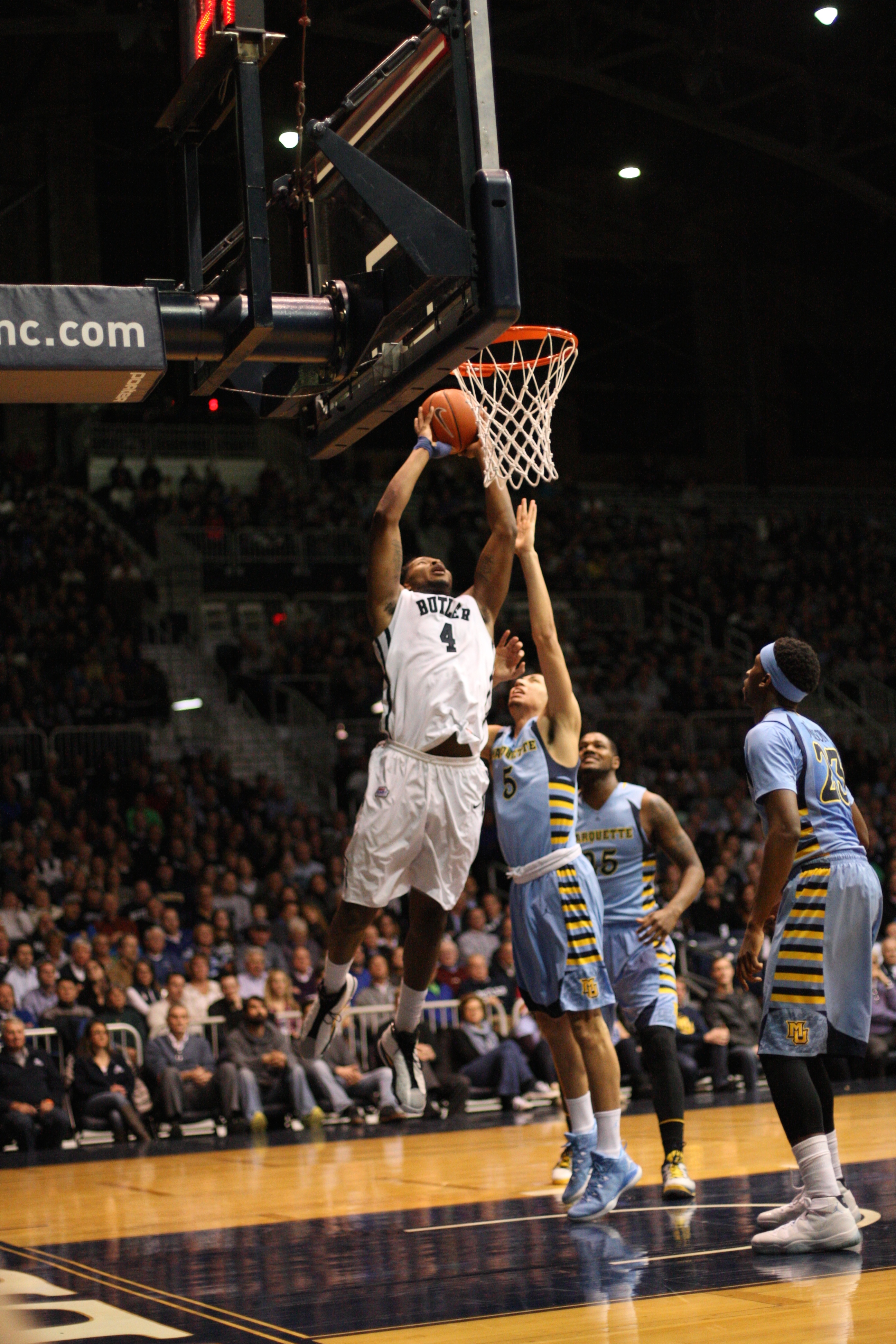 The No. 23-ranked Butler men’s basketball team is on the road at DePaul today. The Bulldogs are coming off a 73-52 home win over Marquette Wednesday night. Saturday’s tip-off is set for 2 p.m. ET, on FOX Sports 2.

-The Bulldogs rebounded Wednesday night after getting routed at rival Xavier last Saturday. Butler has not lost consecutive games since Tennessee (Dec. 14) and Indiana (Dec. 20).

Junior Kellen Dunham rises for a shot during a 73-52 win over Marquette at Hinkle Fieldhouse Wednesday night.

-Junior Kellen Dunham scored 22 points in that game; his seventh time in the 20’s this season, one of which came against DePaul. He scored 24 against the Blue Demons in a 83-73 home win.

-Butler is ranked No. 23 in both the AP Top 25 Poll and the USA Today Coaches Poll. Butler was projected as a 6-seed in Joe Lunardi’s latest Bracketology release on ESPN, and as a No. 5-seed in the latest CBS predictions by Jerry Palm.

-The Blue Demons have lost five straight and eight of their last nine games, after what looked like a promising start to the season. They were again picked to finish last in the Big East Preseason Coaches Poll, but started the season 6-1, and started Big East play with three straight wins.

The Blue Demons also won five of their first seven in conference play, before hitting this slump.

-Holtmann called the Blue Demons “possibly one of the best shooting teams in the country, certainly in the conference.” They are shooting 44 percent from the field and 35.7 percent from three-point range, two numbers almost identical to the Bulldogs’ (44.3 and 35.7, respectively).

Keys to the game

The Bulldogs have been playing without sophomore forward Andrew Chrabascz since he broke his hand Feb. 14 during a home loss against No. 6 VIllanova.

The first two games without him were rough offensive games for the Bulldogs — squeaking out a 58-56 win at Creighton with the help of veterans, and the blowout loss at Xavier — but they seemed to finally find their rhythm with freshman Tyler Wideman Wednesday night.

Wideman tied a career-high eight points, and pulled down eight rebounds, solidifying his role as a starter until CHrabascz returns to the lineup.

Reports are that Chrabascz isn’t officially ruled out of playing against DePaul, but it is unlikely he will see any action; his initial timetable was set at three-to-six weeks, and it has been two.

He was, however, on the floor for warmups Wednesday night, in street clothes helping with rebounding. That was progress from the previous two games, where he didn’t come out for warmups.

Garrett is a 6-foot-6 sophomore guard who is shooting 33.3 percent from three-point range this season. Eight of the Blue Demons’ wins have come when Garrett hits at least 50 percent of his threes.

In the four wins Garrett didn’t shoot above 50 percent, he compensated by missing just one free throw in 27 combined attempts.

He was held to six points on 1-of-6 shooting (0-of-4 from deep, and 4-of-6 from the free throw lone) when the Bulldogs beat the Blue Demons earlier in the month.