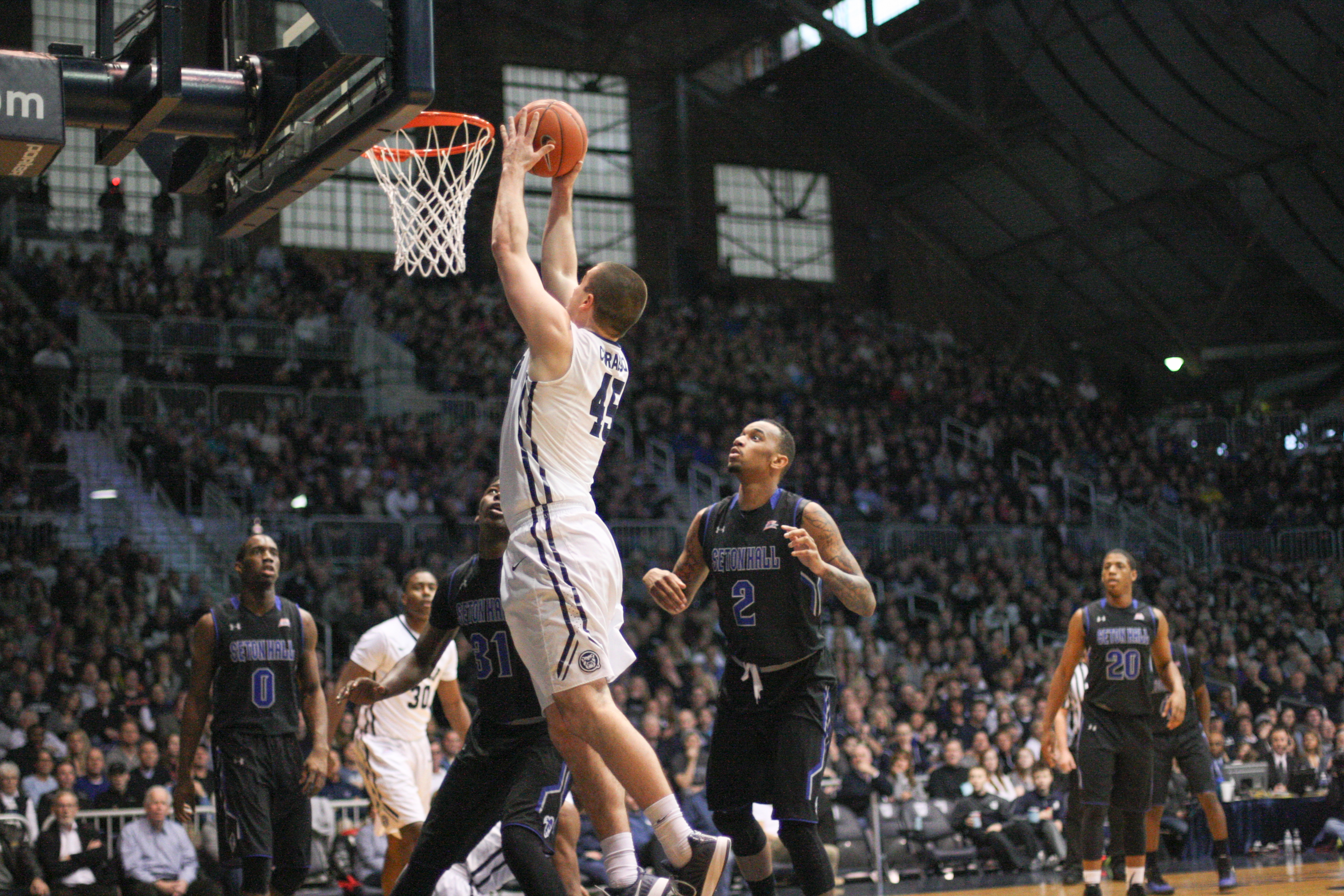 Tuesday’s game will be a rematch between the two teams exactly one month after the Bulldogs came away from Carnesecca Arena with a 73-69 win over the then-No. 15 Red Storm on Jan. 3.

Butler’s Kellen Dunham put up a season-high 28 points against the Red Storm, including a three-pointer with just more than two minutes to play that put the Bulldogs up by five.

Since that game, the Red Storm has gone 3-4 and the Bulldogs have gone 5-2.

Sophomore guard Rysheed Jordan did not play against Butler back in January for “personal reasons,” but will be suiting up Tuesday night. He is averaging 13.4 points per game.

As the season has progressed teams have begun to slow Dunham’s productivity, playing to shut him down, and try to make other Bulldogs step up to get the win.

Junior Kellen Dunham shoots a jumper during a 77-57 win over Seton Hall on Jan. 25.
(Photo by Mike Andrews)

That was evident Saturday when the Golden Eagles held Dunham to eight points through nearly 38 minutes of play.

But someone else did step up for the Bulldogs, as sophomore Andrew Chrabascz had a career-high 30 points.

Those two were key down the stretch Saturday, scoring 24 of the team’s final 29 points – each of them had six points in overtime.

Dunham finished with 17 points. He has been held to single digits just once this season, putting up just seven points in a 64-61 home win against Creighton on Jan. 21, the beginning of the team’s current three-game win streak.

St. John’s has nine players 6-foot-6 or taller on its roster. Only one of them is a starter, however, and that is 6-foot-10 junior Chris Obekpa.

He had 11 points, seven rebounds and five blocks against the Bulldogs in January.

The Bulldogs have done an exceptional job defending teams’ big men this season. Aside from their performance against Obekpa, the Bulldogs have held Georgetown big man Joshua Smith to 17 points and 13 rebounds in two games – he averages 12 and seven per game.

North Carolina’s Kennedy Meeks (6-foot-9, 280 pounds) was held in check when Butler beat UNC in the Battle 4 Atlantis in November. He had seven points and 10 rebounds, compared to his averages of 12.8 points per game and eight rebounds.