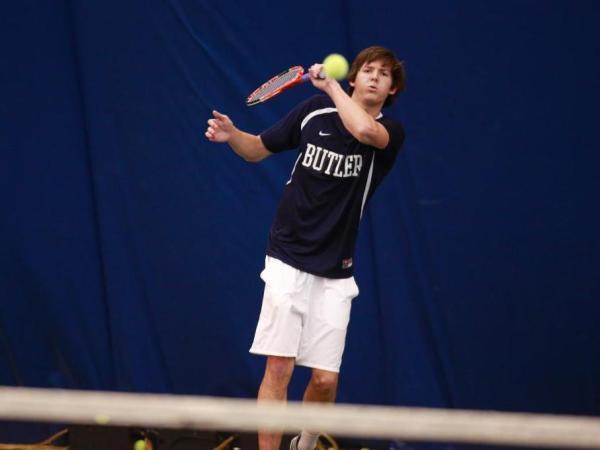 Most students living on Butler University’s campus are within a few hours drive or less from where they call home, yet it still may feel far away. However, five of Butler’s tennis players feel even further away from home.

All five athletes were looking to keep their tennis careers going after high school and chose Butler as the place to do it.

Senior Sam O’neill, who is from New Zealand, said he wanted to continue with tennis without going pro while also being able to work toward a degree. “Web-based” recruiting was how he ended up in contact with former coach Jason Suscha.

“I sent out a letter of interest to large number of schools which had an attachment to a YouTube video of me playing, as well as my ‘tennis resume’ — basically, a summary of my schooling up until that point, as well as my tennis results and rankings,” he said.

Senior Pulok Bhattacharya said he played tennis in India much of his life and was one of the top players in the country. He came to the States wanting to play Division I tennis, but Butler reached out to him with a better financial offer than the other schools.

Now looking back on his decision, he said that Butler has turned out to be the right choice for him.

“I would describe my last four years here as an international tennis player as one of the best times of my life, where I have made connections with some amazing and wonderful people and had great experiences with academics and student life,” Bhattacharya said.

Junior Konstantina Adami, who came to Butler from Athens, Greece, in 2012, said a reputable academic school that came with a reasonable price tag was what led her to choosing Butler.

“Butler was one of the best academic schools that I applied for, and they had a great communications program that I was very interested in,” she said. “As soon I got offered with a great scholarship opportunity, I couldn’t say no.”

The move from Greece to America has been a difficult one, Adami said, but being at Butler has allowed for a much smoother transition.

“Living in an environment such as the Butler campus makes the transition much easier,” Konstantina said.

Junior Brandon Woods, who hails from Quakers Hill, Australia, said he found the transition to be “quite easy.”

He said tennis has offered him a great opportunity to travel around the country, something he really enjoys.

Junior Andres Maynez — a native of Torreon, Mexico — also said the transition was hard at first, until he began meeting people. Playing tennis in the United States was always a goal for him, Maynez said, and Butler offered him a great opportunity athletically and academically.

Being on the team has become something he said he really values.

“My favorite part of being here is being on the tennis team with great, hard working, self-motivated and smart guys who are my best friends,” Maynez said.

The diverse backgrounds and “upbringings” of these players has created a Butler tennis team like no other, tennis coach Parker Ross said.

“They obviously add a lot of cultural diversity to the team, and I would venture to say that we have one of the most unique Butler tennis teams ever,” he said. “Everyone has a very different personality and all contribute to our team’s strong camaraderie and chemistry.”

The teams will be back in action this weekend when the men travel across town to face the University of Indianapolis Friday at 3 p.m. , while the women will host the University of Dayton at the Butler  Tennis Bubble Saturday at 10 a.m.