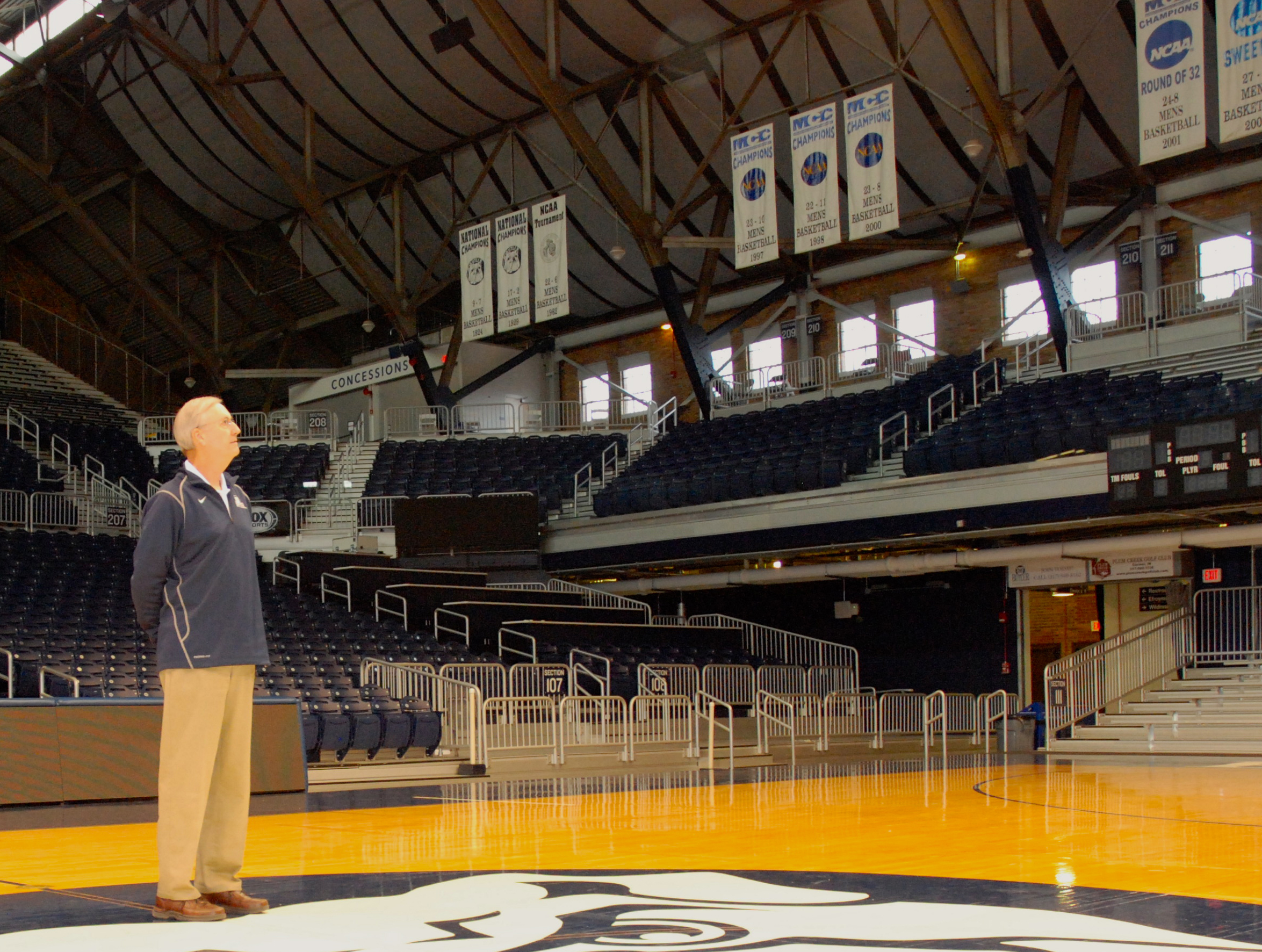 To the average outsider, Butler University is most closely identified by former basketball  coach Brad Stevens and his glasses, underdog basketball teams playing too late into March and sweater-wearing bulldogs in arenas they shouldn’t be in.

According to the commercials, Butler is impact, family, and home, a small liberal arts college in a Midwestern city.

But to those who know him, nothing says Butler like the name Jim McGrath.

McGrath has been a sports information director at Butler since 1981.

That is when former Athletic Director Bill Sylvester hired McGrath as the first full-time SID the school ever had.

McGrath served as a sports information director at his alma mater, Augustana College in Rock Island, Illinois, for 10 years before taking the job at Butler.

McGrath plans to retire at the end of this school year, capping off a 34-year career as the man in charge of setting up media interviews for Butler sports teams, coordinating daily operations, and being a man that so many call a great person, colleague and friend.

McGrath said he and the rest of the staff have not had any talks about a replacement for his position, and they will not make any decisions until closer to the end of the school year. He also said that decision will be left up to Athletic Director Barry Collier.

Many people who know McGrath have thought about who he is and what he means to the university, as his time on campus draws to a close.

“These three words sum him up,” Ken LaRose, associate athletic director, said. “These are three key words for anyone that knows him.”

LaRose, who graduated from Butler the year before McGrath was hired, returned to Butler as a football coach in 1984 before leaving in 2001 and returning to a new position in 2013. He said he kept in touch with McGrath while he was away from Butler, and has become even better friends with him over the past two years in his new post at the university.

McGrath has been named to three different hall of fames  — the Butler Sports Hall of Fame, The College Sports Information Directors of America Hall of Fame and Augustana’s Hall of Fame.

He said he is proud of and grateful for the honor, but he is the kind of person that would rather share the fame.

“I have always kind of felt my job is to shine the spotlight, not be in it,” McGrath said.

“From the first year I went to Butler to now, I have had a relationship with Jim, and the thing that’s amazing to me, is that I’ve never met someone so uniformly like Jim McGrath,” Minner said. “You can’t pay someone to say a bad word about Jim McGrath.”

Minner said something he learned from McGrath and something he will keep in mind as he continues his broadcasting career is how to give people respect.

“From day one as a student to me being the broadcaster now for the team, Jim treated me with the same level of respect,” Minner said. “And that is pretty rare, and that stuck with me.

“Whether I was a freshman in college asking to have a sit-down interview with Brad Stevens, or now in that full-time play-by-play job, I always felt like Jim treated me the same way.”

A man of many stories

Anyone who knows him will tell you that McGrath is the type of person that could talk someone’s ear off. He has all sorts of stories to tell. From rambling on about people and athletes long gone from the Butler Bubble and their personal stories, to Butler’s run to back-to-back NCAA National Championship Games in 2010 and 2011, to the daily beat in the sports world.

Aside from the Final Four runs, McGrath said his personal favorite story during his 34 years at Butler is a pretty personal one.

His son Chad pitched on the Butler baseball team and in 1998 baseball coach Steve Farley had 13 pitchers on his staff when he realized that the NCAA record for most pitchers used in a single game was 12.

Of course, Farley wasn’t going to let the opportunity pass to break a record. And who was the final pitcher to make an appearance and officially break the record? None other than Chad McGrath, picking up the save.

Members from within the Butler community have nothing but good words to say about McGrath.

“His work is of the highest quality and along with his humble servant oriented approach, set a standard of excellence for all of us that had the great pleasure of calling Jim our colleague. His contributions to Butler University are immeasurable and we are all the better for having worked alongside Jim.”

But it is not just the older generation that sends praise in McGrath’s direction. Junior guard Kellen Dunham said he loves getting to work with McGrath on a daily basis.

“It’s great because he kind of organizes everything, makes sure that we’re not talking to people we shouldn’t,” Dunham said. “He’s always pointing us in the right direction, and he does a great job kind of taking on the whole media side, it almost seems like sometimes by himself.”

“He’s a great role model in the way that he carries himself. Always a great attitude and a positive person to talk to.”

“He’s great at what he does,” Barlow said. “He’s always very easy to get a hold of if you need to ask him something. He’s always willing to work with you, when it comes to media if you have a conflict, he’s always trying to help you out, and he’s just a great guy.”

As he is a busy man on a daily basis, McGrath said he became agitated one day in December when he was practically forced into moving a budget meeting to a time that conflicted with his schedule. Further, the meeting was moved to the press box at the Butler Bowl, which he said really got on his nerves.

Little did he know, he was just about to receive a great honor – the Champions Room in the press box was named after him.

“I open the door, and who is the first face I see? Brad Stevens, and I looked, and my whole family was there,” McGrath said. “And I said, ‘this is not any kind of a budget meeting I’ve ever been to. They got me good on that one.

McGrath is proud of the honor, but as he so often does, he stepped out of the spotlight to let it shine on someone else. The room was named not just in his honor, but the plaque also bears his wife’s name.

“Needless to say, that was emotional,” he said. “What a great thing that Butler did.”

His wife Judy has helped him out over the years, especially early on in his career, and he said he is honored that Butler recognized her as well.

“I could not have done this job for a year without her, and certainly not for 34 years,” McGrath said. “She’s been so involved in everything that I’ve done, and for somebody to recognize what a big part she’s been in my career, that was really, really tremendous.”

McGrath said he and his wife intend to catch up on all the traveling they’ve missed out on over the past 34 years.