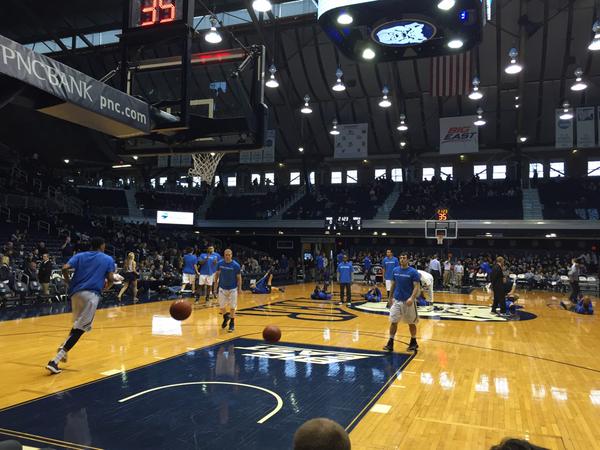 And that’s when the theme of the day came in. Sunday was the second annual “Stay Positive Day” at Hinkle Fieldhouse, with support and fundraisers for Butler student Eric Day’s Stay Positive Foundation, which supports cancer research.

Senior Kameron Woods converted an old-fashioned three-point play, and then it happened. Junior Roosevelt Jones made a layup and the Bulldogs rattled off a 28-3 run to hold a commanding 61-40 lead.

The Hinkle faithful came alive during that run, fueled by up-tempo basketball and a media timeout speech by former Butler basketball players Erik Fromm and Andrew Smith, both supporters of the Stay Positive Foundation. Fromm lost his father to cancer during his junior season, while Smith himself is just coming off successful chemotherapy.

Senior Alex Barlow, wearing a Stay Positive t-shirt and wristband in the postgame press conference, said he is a friend of Day’s, and when the Bulldogs were down, the team fed off the energy of the crowd, but they didn’t let it get to them too much, as they were able to keep their focus.

“Sometimes you can get caught up, when you’re on a good run, in the crowd, and celebrate a little too much, and they come down and score,” Barlow said. “So I think really what we did was just making sure each possession was a good one, and not giving up an easy basket, or taking a bad shot, or anything like that.”

During the beginning of Butler’s big run, Seton Hall was forced to call a timeout on an inbounds play, leaving head coach Kevin Willard with just one timeout in his pocket.

The Bulldogs used that to their advantage, as Willard couldn’t stop the momentum, nor take the crowd out of it.

All 12 Bulldogs saw playing time Sunday, including freshman Jackson Davis who had a dunk during Butler’s big second half run.

Seton Hall’s leading scorer Sterling Gibbs was held in check by the Bulldogs for just 10 points.

Butler head coach Chris Holtmann said the Bulldogs game planned for Gibbs, and thought they were successful in defending Gibbs.

“We had some things we had in for our ball screen defense with him, in particular,” Holtmann said. “He comes off an awful lot of ball screens, so we really wanted to own the ball with him and make it difficult for him because he is really good at shooting, as we’ve all seen.”

Brandon Mobley led the way for the Pirates with 15 points Sunday.

The Bulldogs have six days to rest up before heading north to face Marquette University Saturday, Jan. 31.

It will be the first meeting between the two teams this season. Butler split a pair of games with Golden Eagles (10-9, 2-5) last season, getting a 69-57 overtime win in Indianapolis and a 69-61 loss in Milwaukee.

Marquette has lost four of its last five games, with the lone win coming against last place Creighton 53-52. The Golden Eagles host Seton Hall Wednesday, also the first meeting between those two teams this season.