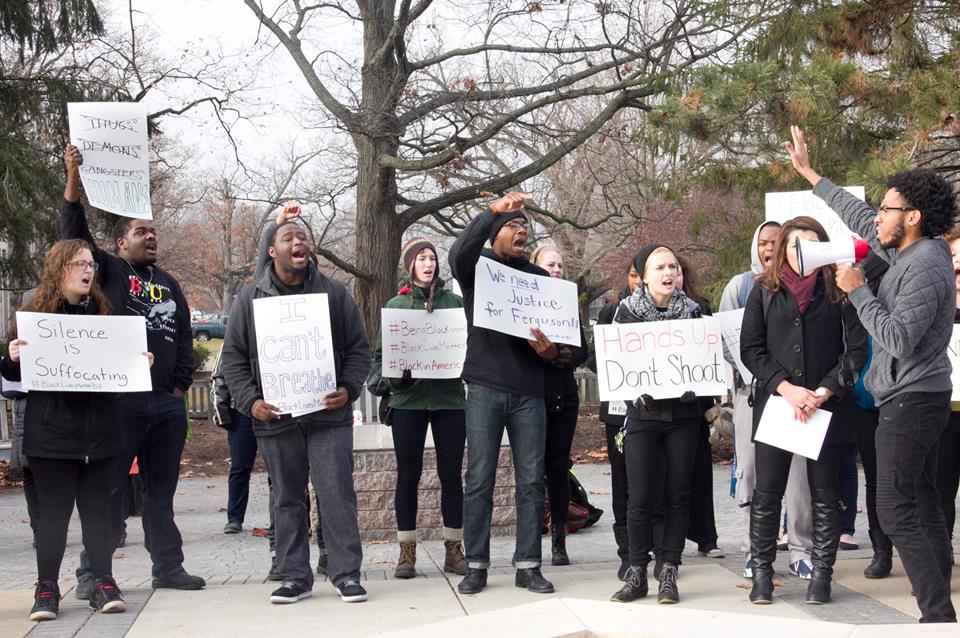 Black Student Union and Demia invited members of the Butler community to support the demonstration through a Facebook event.

The Facebook event said the issues associated with Brown and Garner’s death concern everyone, directly or indirectly.

“We understand this is a pressing time during the semester, but as Bulldogs that promote and embrace a Community of C.A.R.E., we feel an obligation to create a platform for voices to be heard,” the Facebook post read. “Butler University cannot remain silent on an issue that is so vital to our community.”

Viviane Linos, co-president of Demia, and Jeremy Washington, co-president of Black Student Union, said the two organizations wanted to address a larger social issue here on Butler’s campus because these issues are pervasive and affect people in and out of the Butler bubble.

“We felt like there was a definite need for consciousness-raising on our campus,” Linos said. “We need to address this. We felt like as Butler students, we would be lacking as social justice advocates if we didn’t speak up about this. We were trying to break the silence.”

Linos said Demia decided to partner with Black Student Union to expand the reach of the event which was planned very quickly. The event was meant to provide a platform for voices, allow people to vent their frustrations and ultimately provide a call to action.

The event started with a summation of current events and highlighted the use of social media through different hashtags, such as #BlackLivesMatterBU and #ICantBreathe. Various people spoke in an open forum for over an hour until the demonstration moved from the Star Fountain to Hampton Drive.

The group participated in a die-in, where they laid in the middle of the street for four and a half minutes to symbolize the four and a half hours Michael Brown laid on the ground in Ferguson, Missouri.

Butler University police officers did not lie with the people in the street, but they did not react violently either. Officers and cars blocked traffic on Hampton Drive to ensure their safety.

“We were not coming towards the police at all,” Washington said. “This is not a fight with the police itself. When your uniform covers you and you commit a murder, that’s the problem. There is injustice in our system.”

Linos and Washington said they saw people watching from the academic buildings and as they walked across campus.

The groups also received praise and criticism on social media sites, such as Yik Yak, Twitter and Facebook.

“When you have seemingly radical opinions and you take seemingly radical approaches to things, I think in a conservative area you are going to be met with some backlash,” Linos said. “I don’t think that I didn’t expect that. I just want to make sure that people realize that we have a right to be safe on this campus and that we have a right to express ourselves and to say what we feel is wrong.”

Washington said any response is good, whether it is positive or negative, because it made people think about the issues.

The two groups are not done yet. Demia and Black Student Union want to host a prayer vigil on January 24 and an informational session about knowing your rights when dealing with law enforcement.

Linos said one of the main focuses is to make people realize racism is still alive.

“I’m glad for the attention we got today,” Washington said. “But it is just the start. People have been coming up to us saying, ‘Oh, you guys did a great job today.’ It’s not a great job until this campus changes.”