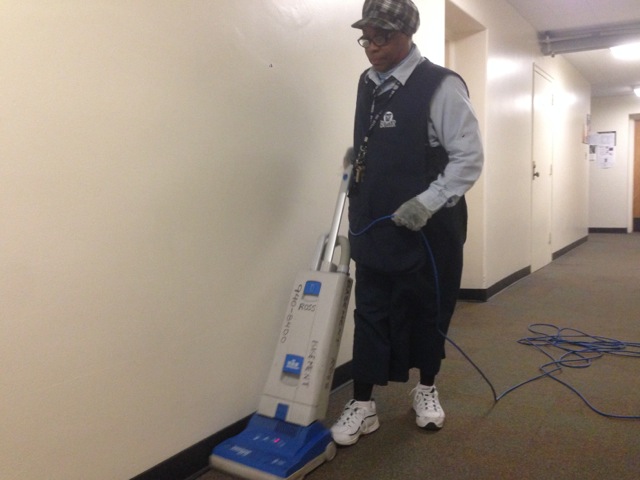 For housekeeper Ejuanda Fields, Ross Hall is more than just a place to clean.

“I look at this as my big house,” Fields said.

Fields, 60, has worked on the Butler housekeeping staff for 17 years and has been positioned in each building on campus.

Fields is spending her first year as the housekeeper for the basement of Ross Hall. Fields said the basement residents have been very respectful, and she enjoys seeing students each morning.

“Young people keep you in the loop,” she said.

Before coming to Butler, Fields was a homemaker. As the mother of eight and grandmother of 17, she has kept busy for most of her life. Fields said she has developed a passion for cleanliness from her experiences.

“I just want to see things clean,” she said.

Fields attended Broad Ripple High School and lives within walking distance of Butler. Growing up in Indianapolis, she did not know where her life was going to take her.

“I just wanted to be happy,” Fields said.

When the time came to find a job, her decision to apply for work at Butler was based on her mother’s advice.

“My mom always said, ‘If you ever work a job, get one that is close to home so in case there is an emergency, you don’t have far to travel,’” Fields said.

Mrs. Fields, as she is called by her friends, took her mother’s advice. Since she lives so close, has not missed a day of work.

Fields has been married to a pastor for 35 years, and teaches Sunday school in her free time.

“I have learned to go into a place and set my own atmosphere,” Fields said. “If you want pleasant, then you set a pleasant atmosphere.”

Bobby Fuller, another housekeeper in Ross Hall, who spent the past seven years working with Fields, said he has enjoyed it.

“It has been a privilege,” he said. “We have a lot in common. I think she has been a lot better housekeeper than the basement has seen before.”

Moe Simmons, a resident assistant in the basement of Ross, agreed and said he feels Fields and the rest of the floor’s housekeeping staff deserve more credit.

“It takes a lot for them to wake up in the morning every day to come clean up a mess that they didn’t even create,” Simmons said.

Fields said although Ross Hall can become messy at times, she is willing to take on the challenge.

“Ross Hall, over the years, has been a taboo building because of the young men, but here I am,” Fields said.

However big the mess, Fields said no one has time for negativity. Instead, she goes to work everyday with a positive attitude.

“A lot of people think that because we are in housekeeping, that it is just all about cleaning, but it’s not,” she said. “It is all about the mindset.”

Fuller said he applauds her approach to the job.

“I have never seen her angry,” Fuller said. “That is refreshing, and I can learn from that.”

Fields will continue to serve Butler students. She said she will not be putting down the broom anytime soon.

“I am so content with my life that there is nothing that I would change,” she said.

Fields suggests others should always be honest with themselves to maintain a happy life.

During the semester, Simmons has clearly taken note of Field’s contagious positivity and strong work ethic.

“There is not enough thanks for me to really give her,” he said. “Keep up the amazing work.”