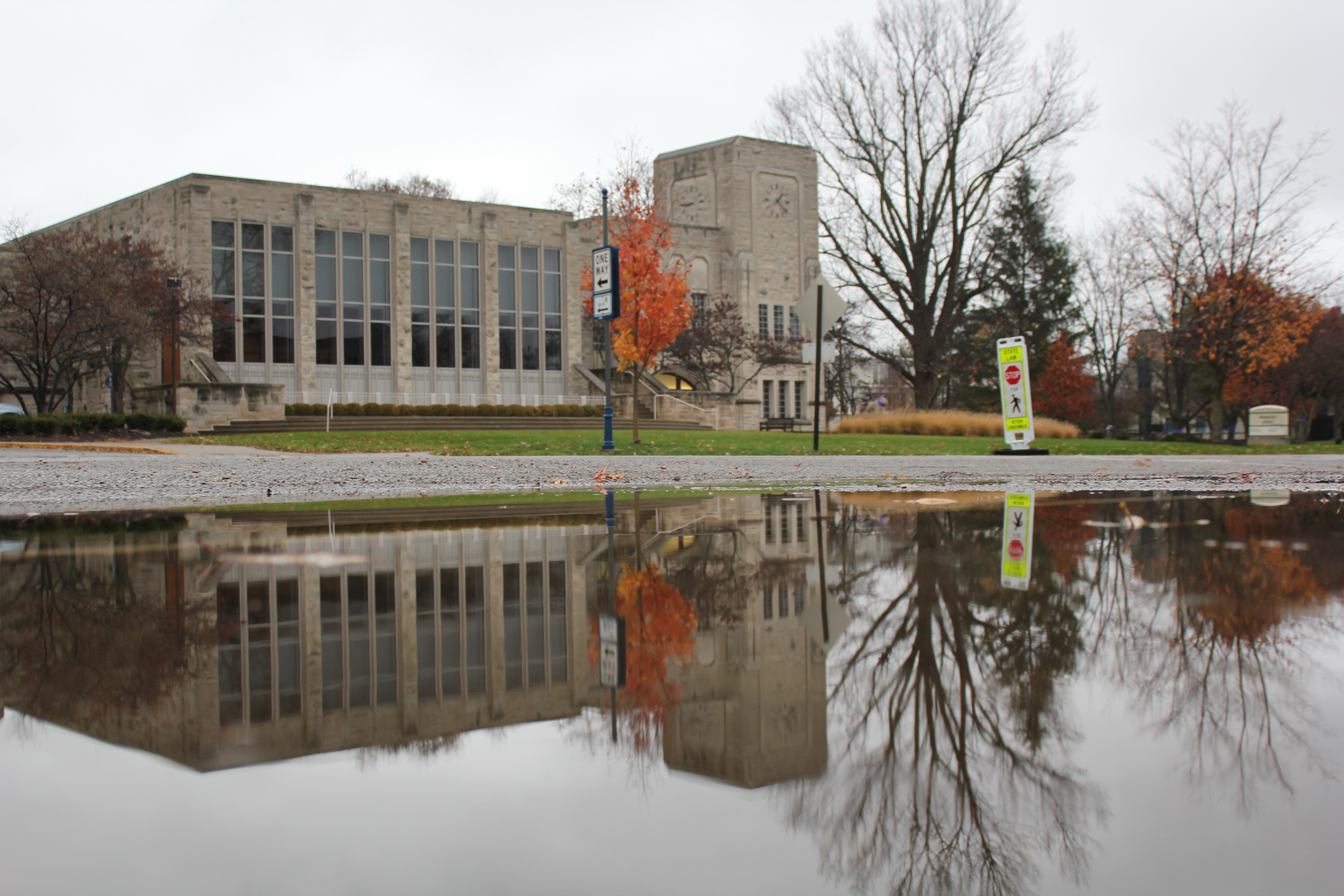 Students, faculty and staff at Butler University are no strangers to puddles after rain or snow.

Storm water is a problem throughout all of the city of Indianapolis, including Butler’s campus on the north side, according to the Department of Public Works of Indianapolis storm water program.

Many parts of the city lack adequate storm sewers and drainage, leading to standing water in yards, flooded streets and basements.

“My experiences with puddles my freshman year here at Butler have prepared me for this year,” sophomore Adele Hunter-Shields said.

Hunter-Shields said she always prepares for very large puddles, regardless of how much rain is expected.

“Puddles here are like the Star Fountain,” Hunter-Shields said. “You think it is pretty shallow until you commit and realize you are basically drowning.”

Student Government Association President Chad Pingel said he knew he wanted to address campus flooding while he was campaigning last year, whether it was through communication or funding.

“After looking more in-depth at the issue, it is definitely surrounding communication and plans that are already in place,” he said.

As part of Butler President James Danko’s 2020 vision to improve the university as an entire institution, several campus improvements are on the list—including improving flooding.

“They have all of the plans set and the funding is also in place,” Pingel said.  “However, a lot of things are dependent on when other campus improvement projects are happening.”

Current campus construction projects are being taken into consideration before work to fix flooding begins.

“They do not want to have to tear up the sidewalk if they have to redo water lines and power lines in the future, for when they are making the new residence hall,” Pingel said.

“A lot of what I have been doing is making sure that we have students that are working on specifically addressing this topic to other SGA student leaders and then being able to communicate future plans to the rest of campus,” he said.

Pingel said he hopes to communicate flooding issues with Butler students through press releases. He also wants to host another SGA town hall meeting next semester.

“That is when administrators will be able to give great updates to the student body to speak more to the different things going on on campus,” he said, “whether it be the Streetscape project completion or new student housing, or even future plans with academic spaces on campus.”

American Campus Communities, the company Butler hired to build the residence hall, is working with Butler to determine design plans for improvements coming to campus.

“I think that everyone on campus knows that this issue takes time, and we appreciate the patience that has been with it,” Pingel said. “I know plans are already there; funding is already there. It is just a matter of time before students are able to see the kind of improvements they have been asking for.”

Part of the solution includes permeable pavement and rain garden installations throughout campus to improve drainage and prevent flooding.

Permeable pavement is made up of sustainable materials and techniques for a base and subbase that allow the movement of stormwater through the surface.

A rain garden is a planted depression or a hole that allows rainwater runoff from impervious urban areas, such as roofs, driveways, walkways, parking lots and compacted lawn areas, the opportunity to be absorbed.

Permeable pavement and rain gardens were installed outside of the Health and Recreation Complex as a part of the Streetscape project.

“The good news is we have got the designs for this, so I am hopeful we will be able to do the next section next summer,” said Rich Michal, executive director of facilities.

Permeable pavements and rain gardens will also be added in the mall area of campus in efforts to help with flooding in the center of campus.

Michal said he hopes they will be able to do something similar on West Hampton Drive.

“We have split the Streetscape project in three or four phases,” he said. “We are on the second phase now. Hopefully, by the end of next week, we will have Sunset all paved.”

The Streetscape project is scheduled to be completed by May 2015.