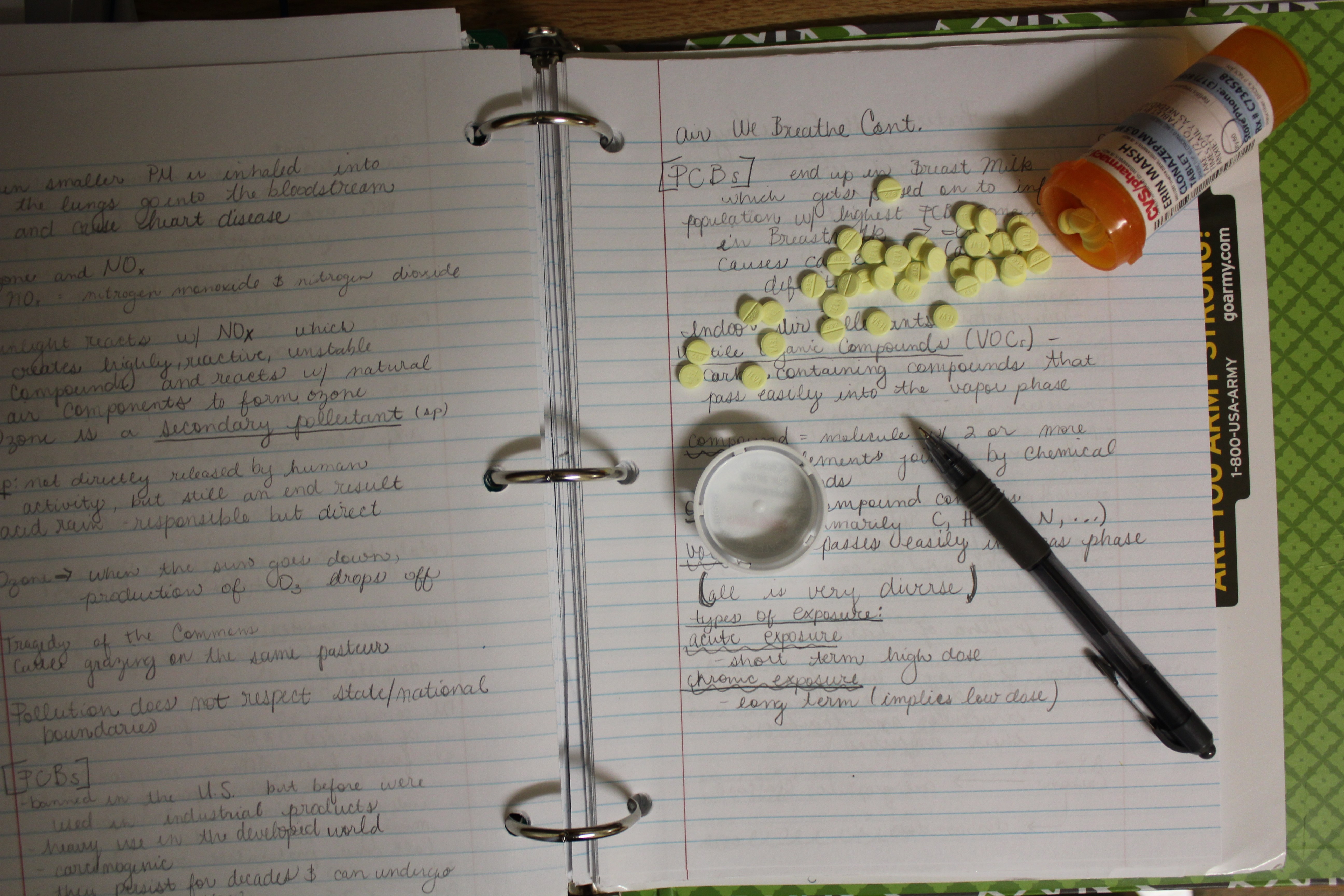 The words of your microbiology paper start to swim on the computer screen before your heavy eyelids. The clock ticks toward 1 a.m. as the cursor hovers blankly on page one.

So you pop a pill that draws your attention to all things microbiology like a magnet. You finish the 10-page paper in two hours and head to bed feeling nothing short of confident.

This scenario is not far from some college students’ experiences.

“Study drugs,” referring to drugs such as Adderall and Ritalin, have become increasingly popular on college campuses across the U.S., according to the National Institute on Drug Abuse.

Adderall is mainly used to treat attention deficit hyperactivity disorder and narcolepsy. It is an amphetamine and dextroamphetamine combination, more commonly known as a stimulant. The drug is used to improve concentration and decrease restlessness.

Side effects of Adderall can include anxiety, weight loss and irregular sleep patterns, according to the National Institute on Drug Abuse.

To students, Adderall is better known as the study drug, used to get through a tough test or finals week.

“Obviously, that is an underestimate,” Magnus said. “Those are just the students who admitted it. So if you think 10 percent, that is one in 10. To me, that is a lot of students.”

Andrea, a senior strategic communication major at Butler, was first prescribed Ritalin, a drug similar to Adderall, six years ago to treat her ADHD symptoms.

“For me, it is hard to even sit through a class. And that is really frustrating, but it helps me pay attention,” she said. “But for people who don’t need it nearly as much as I do, I don’t think it is hard to get. I think it is prescribed pretty carelessly.”

The number of Americans prescribed treatment for ADHD has risen 36 percent in the last five years, according to a report from prescription provider Express Scripts.

Tara Lineweaver, an associate professor of psychology and the director of neuroscience at Butler, said Adderall serves a good purpose when used correctly.

“People do need Adderall,” she said. “It is important to separate the proper and improper use.”

Adderall acts on the same areas of the brain as cocaine, but the drug is regulated so you don’t get the same high, Lineweaver said. Adderall it adjusts dopamine levels for prescribed users, but for those not prescribed, the extra dopamine gives users a high.

Adderall is categorized as a “schedule II” drug, according to the United States Drug Enforcement Administration. Listed alongside cocaine and methamphetamine, schedule II drugs have high potential for abuse and can lead to severe psychological or physical dependence.

Andrea said she gets asked if she will sell her Adderall, which would lead to someone else misusing the prescription.

“People assume that because you have it that you want to sell it,” she said “It is annoying to be bothered all the time about a drug that I need.”

Lindsey Hutnick, fifth year pharmacy student, is a member of Generation RX, a student organization comprised of pharmacy and physicians assistant students that works to educate and raise awareness about prescription drug misuse.

“Prescription drug abuse starts here on campus,” Hutnick said. “The average age is 21. The percent of people is always overestimated, but when you think that those are people on all college campuses—that is a lot. It is a big deal.”

More than 4 percent of student respondents to a national survey reported using an illegal prescription stimulant in the last year. The most common reason for using the illegal stimulant was to aid concentration, according to an article in Journal of American College Health.

The misuse of Adderall comes at a cost.

Possession, use or sale of Adderall for illegitimate reasons is a felony.  Not only is this crime punishable by federal law, but Butler also prohibits the use, possession or sale of illegal prescription drugs, and the discovery of these actions will result in “University student conduct procedures,” according to the student handbook.