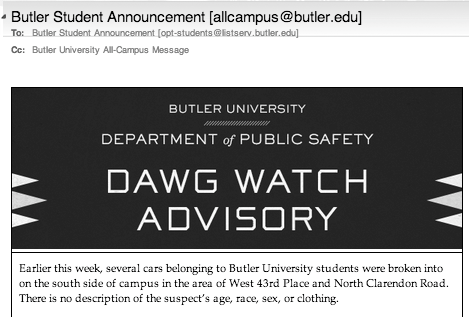 When the Butler University Police Department needs to send a Dawg Alert to notify people about an emergency, its first step is to glance at the Clery Handbook.

The Clery Handbook is a federally mandated guide that instructs postsecondary education police departments on how to report and describe crimes. It standardizes crime reporting procedures for most college and university police departments around the country.

“There are some federally required notifications,” Bill Weber, assistant police chief of BUPD, said. “The highest is ‘emergency,’ where there is an immediate threat to everyone’s safety. The next is a timely warning.”

Junior Hannah Olinger said she would like to receive Dawg Alerts sooner after the incidents are reported to BUPD.

“Sometimes it is hard because you get [Dawg Alert] after problems you need to know,” she said.

Weber said the Dawg Alert sent out on Nov. 5 that warned of a forced fondling was an example of a timely warning. The incident was reported Nov. 4, and since it was an isolated incident that reportedly occurred on Oct. 16, the alert lacked the immediacy otherwise contrived from such warnings.

“It is all done on a case-to-case basis,” he said. “You don’t want to inundate the campus community to the alerts. You don’t want people to become numb to them, or immune.”

Freshman Catlyn Baker said she enjoys getting Dawg Alert, but some of the wording could be improved, especially terms such as “forced fondling”.

“I think they should have used a different word,” she said. “A lot of my friends thought it was funny, but it was supposed to be taken seriously.”

Junior Izzy Ruiz agreed the alerts can be worded better. She said sometimes Dawg Alert can be overly wordy, and she would prefer it just get to the point.

Freshman Corbin Fritz did not sign up for Dawg Alert because he does not think that it will increase his awareness.

“I don’t really see a huge need for it,” he said. “I can usually get information from friends or social media. If there is something really important they will send a mass email.”

Some students rely on Dawg Alert to learn important safety information. Olinger found Dawg Alert useful when it informed her about weather problems.

“Over the summer it was helpful when there was a big tornado coming through, because I wasn’t checking the weather,” Olinger said.

Weber said there is a great deal of thought put into each alert and that they are not sent out “willy-nilly.” Dawg Alerts are meant to keep people on campus safe and updated on safety hazards.

“I think if it gets people talking, that’s a good thing,” Weber said.