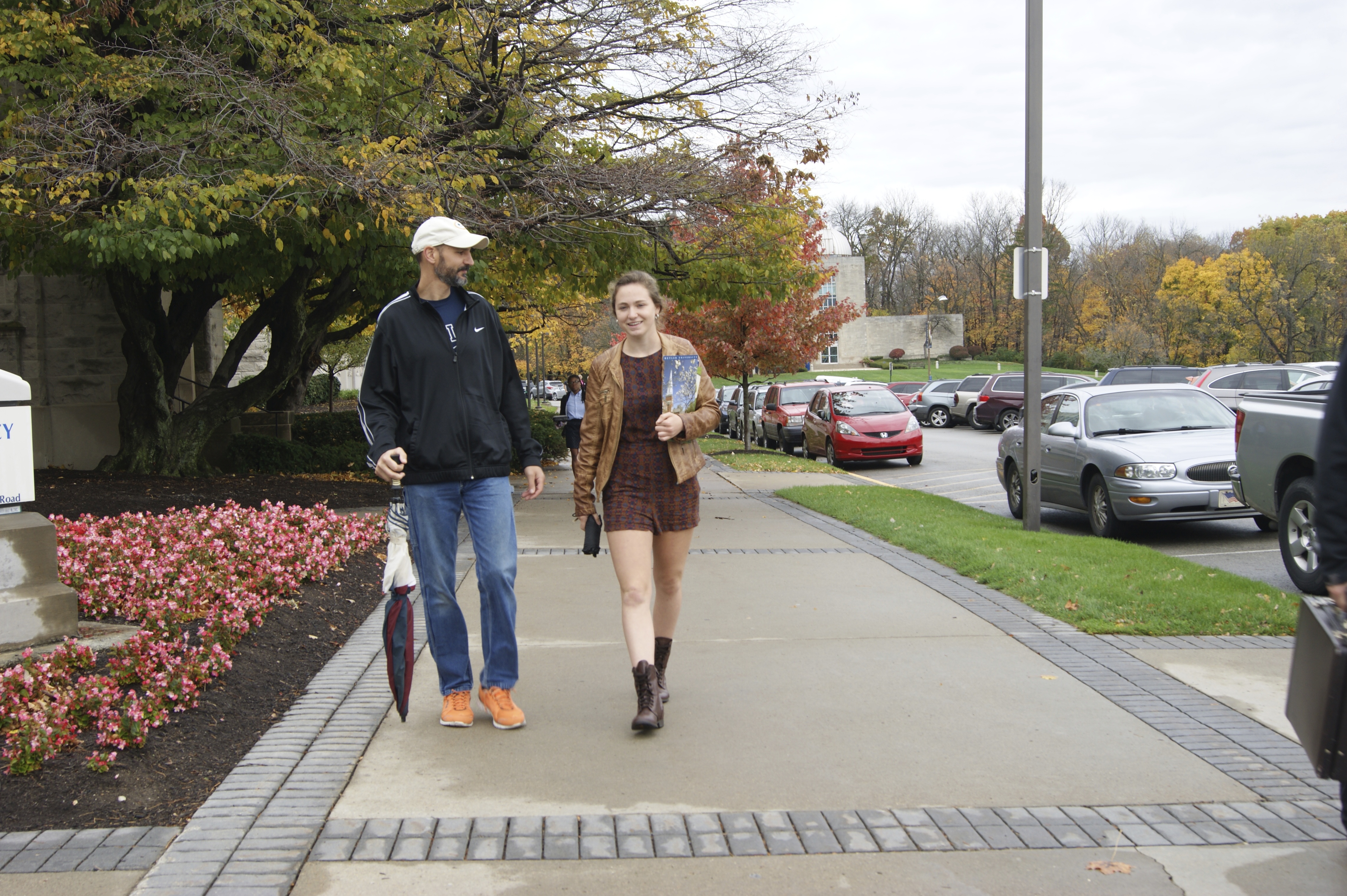 Prospective students and their parents meet in Robertson Hall, awaiting their first tour of Butler University.

A Butler student ambassador will serve as a tour guide and show them around campus. For just over an hour, the students will listen to their guide, learning about Butler and what it offers.

The group will see the academic buildings, a residence hall and other iconic campus locations. The ambassador narrates the walk with facts and his or her own experiences at the university.

When the journey is over, the parents and students go their own ways.

Maybe they go to the bookstore to buy a Butler shirt, possibly the first of many to come. The student might pose in front of the bulldog statue, so they can Instagram the visit. Perhaps they will go to Broad Ripple for lunch. They may even get into the car and travel to yet another campus tour.

That hour spent exploring Butler’s campus and what it has to offer plays a major role in a decision of where to attend college for the prospective students—and for the parents who pay the tuition bill.

The ambassador’s words provide insight into our Butler bubble. Their words can influence prospective students.

The office of admission employs around 60 ambassadors, who give a total of roughly 45 tours a week.

Ambassadors mingle with prospective students at admission events, do office work and serve on panels, as well as serve as tour guides.

They are trained in their different responsibilities and given a manual for their tour information. Ambassadors shadow tours from returning ambassadors, give mock tours and give tag-team tours with returners before they do a tour alone.

Erin Cochard, associate director of admission, said the ambassadors get new tour manuals each year. The manuals include information and statistics that must be covered on the tour, but it is not a script. Every summer, the manual is sent to each department represented on the tour—such as academic departments, residence life and Greek life—to be updated with new information and statistics.

Ambassadors are tested on their knowledge of the information in their manuals, but Cochard said there is more to giving a tour than just relaying the facts.

“We know that their personal touch and their stories about life at Butler is more important to a student to build a connection,” she said. “Students want to hear from students what their experience is like.”

Freshman Moriah Riggs took a tour in March with her parents. She said her tour guides added their personal stories to the information.

“They told us things they liked about campus,” she said. “Which was really nice to hear from a student perspective, instead of hearing it from someone else.”

“I felt a lot more informed about campus,” she said. “It was a lot easier to make my decision to come here.”

One ambassador, who will remain anonymous to protect his or her employment, said not all tours paint an accurate picture of Butler.

The ambassador said admission does not want guides to lie to students, but it also omits certain topics.

“We only say particular information,” the ambassador said. “We are not allowed to say the biggest problem that we have is trying to find parking, or health services is not open on the weekends and never has appointments, which are huge issues.”

Janelle Phillips, coordinator of student programs, said the only thing admission does not want ambassadors to talk about is fountain-hopping, the campus tradition of jumping into every fountain before graduation.

The ambassador said people on tours like to hear about myths and legends on campus, however.

“It attracts people to the school,” the ambassador said. “There are these fun things to do.”

The ambassador said the test is over small details, such as different departments and how many seats are in Hinkle Fieldhouse, but the tours should focus on student life.

“A lot of information can be misconstrued for one person who, maybe, this is the only time they are ever going to come onto Butler’s campus before deciding,” the ambassador said. “I want to be able to give an accurate description of Butler for the ones who fly in just for a tour. Otherwise, they are going to be disappointed in their expensive choice.”

The ambassador said the miscommunications could have come from changes in the workplace environment.

“When I was first hired, it was a very competitive and selective group,” the ambassador said. “I had a ton of hours and gave a ton of tours. Now I have one tour every couple weeks and just a mail shift.”

“The pride in being an ambassador has gone down, which makes you care less on the tour. It becomes a chore. When you do not have the responsibility to know every detail about Butler, the facts become vague and no one is there to check it for you.”

The ambassador said housing and Greek life are two examples of how information can be miscommunicated.

The ambassador said some tour guides call Schwitzer Hall and Ross Hall freshmen dorms, when sophomore also have to live there.

“Students come to campus and freshmen live in Residential College and sophomores are stuck in Schwitz,” the ambassador said. “It does not make sense to them.”

The ambassador said the tours do not go to Ross Hall at all and use a staged room in Schwitzer.

On tours, Greek life is described as “prominent, not dominant, with 30 to 35 percent in a fraternity or sorority,” the ambassador said.

However, in the spring semester of 2014, 43 percent of Butler students were affiliated with a Greek house, according to the 2014 strategic updates documents distributed by Matt Mindrum, vice president of marketing and communications.

To the ambassador’s knowledge, the statistic does not include seniors who do not live in a Greek housing unit, and the data is recorded before freshmen join chapters.

Cochard said the statistics in the tour manual are updated throughout the year through weekly emails or meetings.

“A statistic may be different than the year a student came to visit, but our students are given brand new manuals every year and tested over it,” she said.

The ambassador said another part of the problem was how alternatives are described.

“There is all the bulls— about Independent Council being really big on campus,” the ambassador said. “If you tell a prospective student that and they do not rush, they will say the Independent Council will take care of my social life, but it is practically non-existent.”

However, Riggs said she felt Greek life was described accurately.

“They said you can still get involved in other things and not feel left out,” she said. “There are a lot of clubs and organizations that you can join that they talked about.”

The ambassador said it is the tour guide’s responsibility to give an honest tour.

Cochard said the goal of giving a tour is showing Butler from a student perspective.

“We want them to share what their true experience is, because a family will know if we have stifled them,” she said.

Phillips said the tour should be story-driven to get that message across.

“We want them to be honest,” Phillips said. “The ultimate tour is just to give a Butler perspective. A student who is on campus, who like Butler, who can talk to families and give their perception as well as show the campus in a real way.”