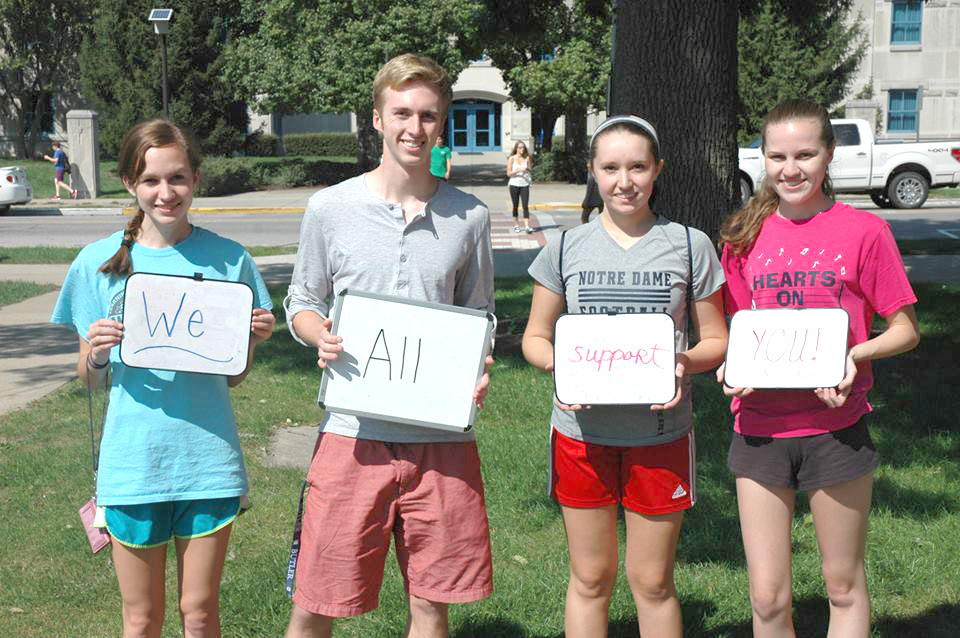 The Stand Tall Project began as a suggestion at a resident-assistant meeting in Butler University’s Ross Hall.

Junior Noelle Rich, an RA in Ross Hall, developed the Stand Tall Project as a way to encourage students in Ross to look out for one another and raise awareness about sexual assault. It began as a two-day event on Sept. 18 and 19.

Rich said the project is a way for the Butler community to come together.

“From the beginning we’ve had three goals,” she said. “We wanted to raise awareness, support survivors and eliminate victim-blaming. It definitely got a lot bigger than we thought it would have.”

As word about the project spread, it grew much bigger than Ross Hall. It became a campus-wide initiative.

“It is important for students to be educated,” Rich said. “There’s a lot of information out there like ‘Stay in groups,’ or ‘Don’t put your drink down,’ but there isn’t much talk about the how to support someone after they’ve been sexually assaulted.”

Someone in the United States is sexually assaulted every two minutes, according to Rape, Abuse and Incest National Network data.

Junior Moe Simmons, a fellow Ross RA, said he thinks the project is important because sexual assault is a relevant issue on Butler’s campus.

“There are a lot of people talking about it,” he said. “But there are very few people who are doing anything about it. It just takes that one person to say no or to help someone out who is in need.”

To show their support, members of the Butler community were asked to write what they would say to a victim of sexual assault on a white board. Then they had their pictures taken holding the white board and the photos were posted on the Stand Tall Project’s Facebook page.

“There have been a few cases that we’ve seen on social media,” he said. “People have told us that they have gone to get help from counseling services because the Stand Tall Ross Hall Project made them feel like they weren’t alone.”

Several groups on campus reached out to Rich to take part in the project.

“Guys don’t like to talk about this,” he said. “But it’s important to start these conversations, because so often sexual assault issues are brought up by women. But the more awareness we get on the guys’ end, the better.”

Dietz said he thinks it is important for people to know they can speak up.

“There are people I know who have been victims,” he said. “Some of them have been brave enough to speak out and some haven’t. I think that’s why I got involved, because I’ve seen how it’s affected those people.”

To move the event forward, Rich is working toward founding a student organization called the Stand Tall Project. Rich said she hopes students who are passionate about the cause will get involved.