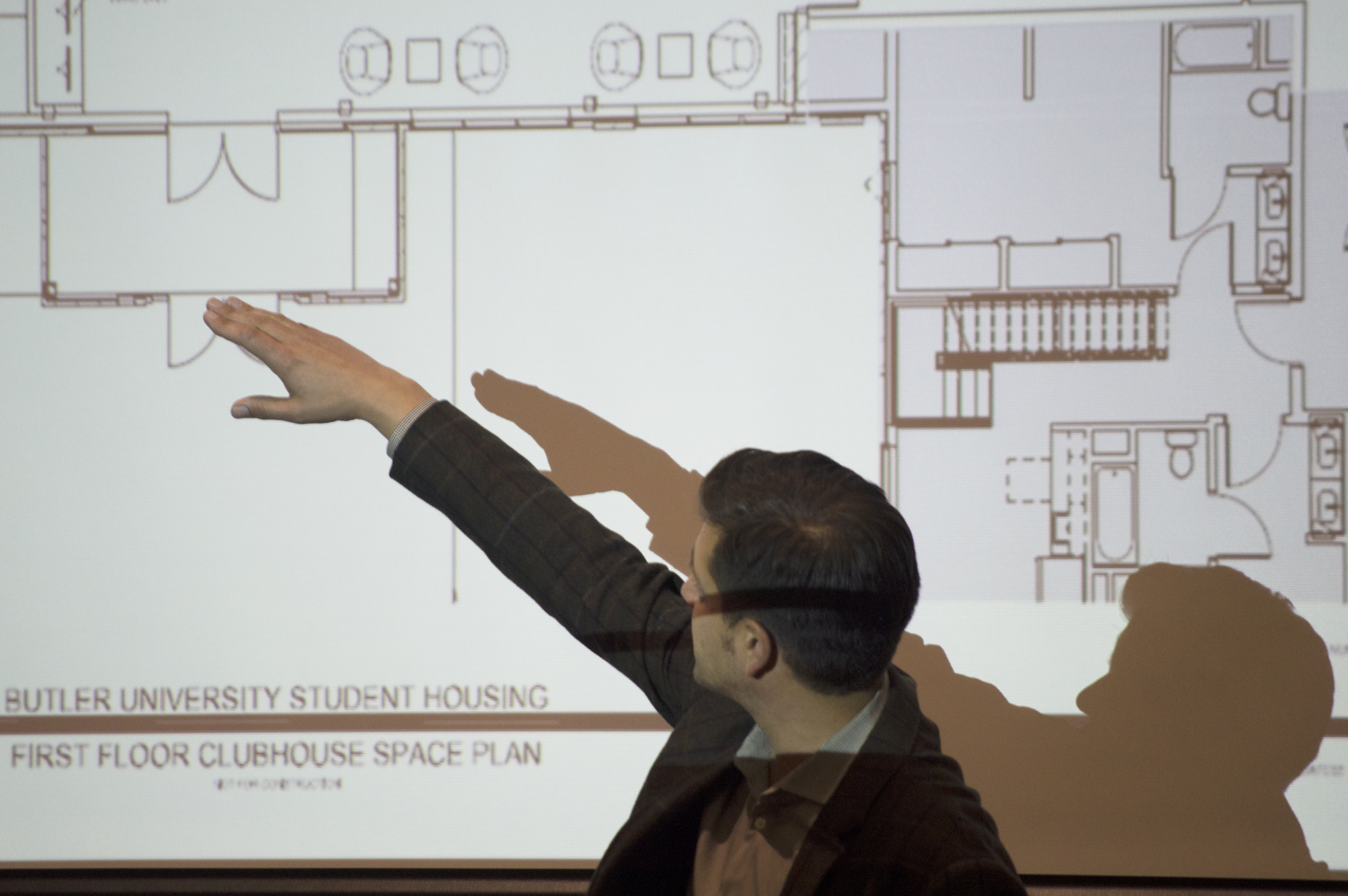 University President James Danko was not in attendance.

Johnson began the meeting by asking the audience if they were juniors or seniors. Most individuals in the crowd raised their hands.

Johnson continued, and said upperclassmen should not believe that the new parking facility and residence hall will not affect them.

“When they became alumni, they were still able to be proud—and the value of their degree increased,” Johnson said.

The five story parking garage will cost an estimated $23 million and it will be located between Hinkle Fieldhouse and Clowes Memorial Hall.

The facility will have over 1,000 parking spaces for faculty, staff and commuter students during the day, and will provide 15,000 square feet of space for retail, Mindrum said.

The allotted retail space could potentially include convenience drug stores and alternative restaurant options. A committee will be formed to determine which businesses acquire space in the parking facility.

Mindrum said that, in particular, the convenience drug stores would operate 24 hours a day, seven days a week, and the drug stores may partner with the College of Pharmacy and Health Sciences to provide learning opportunities for students.

Due to potential high traffic during sporting and other campus events, the garage will have a “speed ramp,” Mindrum said. The entry level will be flat to maximize space and allow for an easy exit.

During the town hall meeting, one student asked if commuter students would have to move their cars during popular events like Bulldog basketball games.

Mindrum replied and said commuter students who use the garage will have to purchase a parking permit and event parking will operate on a “pay for use” system.

“I don’t think we’ll be towing anyone out of the garage,” Mindrum said. “But some of those details still need to be worked out.”

During the time for student questions and input, another said that she used to see cars parked in open lots with snow on them for weeks, indicating that the car was not moved regularly. The student asked Mindrum if cars that are driven more can have a higher priority within the parking system at Butler.

Mindrum responded and said the parking committees regularly look into these issues and that they are always open to “common sense solutions.”

“We did not issue more spaces than there were permits,” Ryan said, addressing another question about permits from a student. “We can’t dictate what someone does or doesn’t do with their car. We offered a long-term solution for those who don’t use their car very often to park in the I-Lot and I’m glad to say that more students have taken that opportunity to do so.”

Because of the new student housing facility being built behind the Irwin Library, temporary parking spaces have been added between the College of Pharmacy and Lilly Hall. Those spaces are filled with gravel and they will be restored to their natural green grass once the major construction is completed, Mindrum said.

The new student housing facility that will house mostly sophomores and some juniors was introduced by Jason Wills, senior vice president from American Campus Communities.

He said that maintaining green spaces on campus were a focal point for the designers of the housing facility.

The housing facility will cost approximately $42 million after total development and finance charges.

A traditional double unit at this new housing facility will cost approximately $70 more than ResCo each semester.

Wills revealed the floor plans of the housing facility, which will be located in the Irwin parking lot.

“Instead of having floor lounges, we brought the lounges into the units,” said Wills. “Also, there will be more laundry rooms available for student usage in the facility and each bedroom in the suite style rooms will have its own access code through Butler’s identification card system, according to Wills.

The new housing facility does not yet have a name and the building should be completed for the beginning of the 2016-2017 school year.

In the final session for open questions, students asked about construction on Sunset Avenue, the living arrangements of the new housing facility and the future of older dorms, such as Ross and Schwitzer Hall.

Construction on the Sunset Avenue streetscape project will be completed by the end of the fall 2014 semester, Johnson said.

Johnson also said that the housing facility will have some gender inclusive spaces but no definite amount of spaces were offered at this time.

Johnson concluded the meeting, saying the current changes to campus are only the beginning. Decisions need to be made to determine the fate of the older housing facilities currently in place.

“All that Ross Love is going away for sure,” Johnson said.