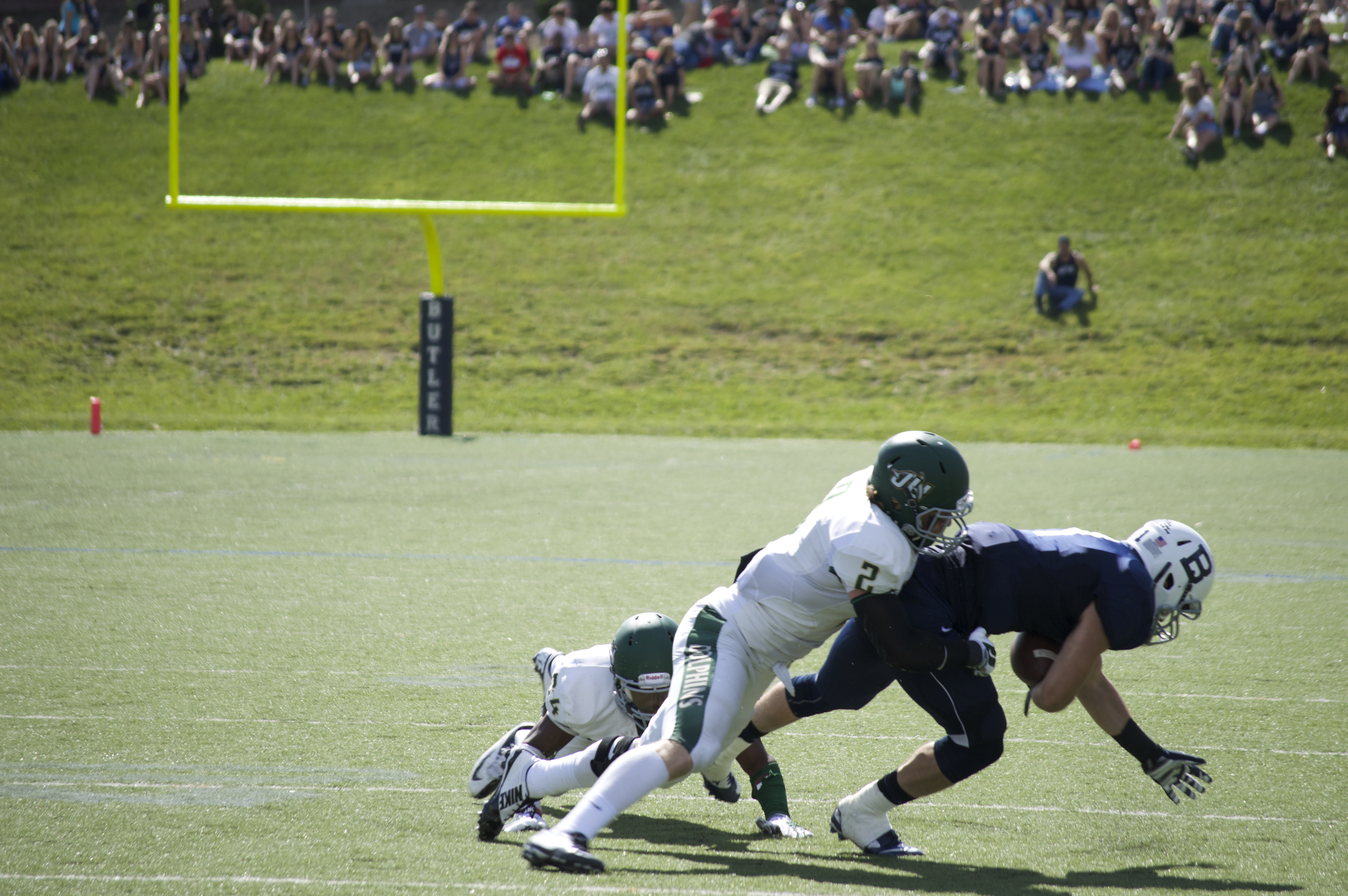 Wearing a Butler football t-shirt, sweatpants and a cast on his right arm, Matt Shiltz stares out across the Butler Bowl as Malcom Weaver barks out signals and runs plays during practice.

Weaver will be filling in for Shiltz as the Bulldogs’ starting quarterback after Shiltz broke his throwing hand in a 28-9 loss on the road at Campbell University on Saturday.

Shiltz said the injury happened on a sack in the first quarter and his hand got caught in somebody’s facemask.

“I don’t really know what happened, I just remember the next play and something didn’t feel right,” Shiltz said. “I had the hand off there, and I had to come out and get it looked at, and I was out for the rest of the game.”

Shiltz said he will have the cast on his hand for about four weeks. Then, he and the staff will decide whether he can play at that point.

Shiltz said he has full confidence in his replacement. “He’s going to be able to go out there and lead the team,” Shiltz said. “This is what he worked for all of camp, and we had a good quarterback competition throughout the fall camp, and going into the season we thought either one of us could step up and be the leader, so now is his opportunity.”

Weaver finished the game Saturday 14-29 passing with one interception. While Weaver hadn’t been playing quarterback all season, he had seen some playing time at wide receiver, which he said helped in getting himself in the flow of things on Saturday.

“The game time and snaps I got at receiver helped a lot based on taking hits and knowing when to get up field, when you can’t get around guys,” Weaver said. “That game experience helped, so I just have to get back in quarterback mode.”

Weaver said he, along with the rest of the team is taking it in stride.

“Being thrown in there was tough, but football puts you in tough situations, and you’ve got to be ready to go.”

The Bulldogs (3-3, 1-2) have a lot of day-to-day injuries, including offensive lineman David Tiwari, who also suffered an injury Saturday. But Buler head coach Jeff Voris said they’re working with what they’ve got the best they can, especially when it comes to the quarterback position.

“The big thing is, [Weaver’s] teammates have confidence in him,” Voris said. “He’s proven it over a handful of years here. He’s been playing multiple roles already this year. He’s had some quarterback snaps, as well as some receiver snaps, so he’s been in games for two years.”

Voris also said he has full confidence in Weaver stepping in the starting position.

“Saturday as the game went along, he got more and more comfortable, so we’re expecting a real good game from him this week.”

Butler hosts the University of San Diego Saturday at noon in the Butler Bowl.

The Toreros are 4-1 on the year, and hold a 2-1 record in the PFL. San Diego beat Butler last year 42-14. The Toreros would have grabbed a share of the PFL title and a trip to the Football Championship Subdivision playoffs, but they had to vacate the title after self-reporting an incident that involved players receiving improper benefits.

The Toreros are riding a three-game winning streak and sit a game and a half behind Jacksonville University (5-1, 4-0) for the PFL lead, a team that beat Butler 35-7 on the Bulldogs’ homecoming.