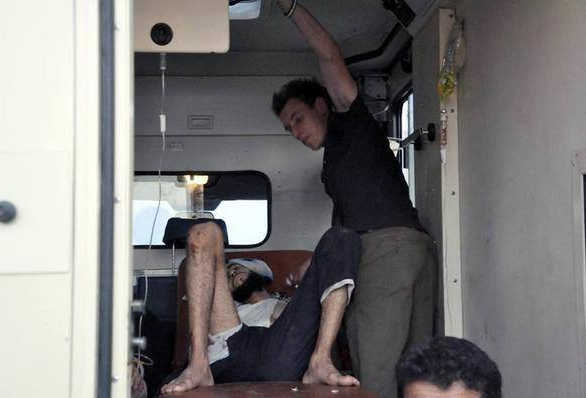 This time three years ago, Abdul-Rahman Kassig, then still known as Peter, was a political science student at Butler University. He attended classes in Jordan Hall and completed service learning projects with his classmates.

Now, he is internationally known as a captive of the Islamic extremist group ISIS. In a video posted Friday, an ISIS member said Kassig would be the next to die.

Kassig, 26, was captured one year ago while doing humanitarian work in Syria, according to a statement by his parents, Ed and Paula of Indianapolis.

The story of his capture sweeps local, national and international headlines, from BBC to The New Yorker to The Washington Post. A YouTube video posted by his parents on Saturday in plea for their son’s life has reached nearly 150,000 views as of press time.

The Kassig family will participate in a prayer vigil on Butler’s campus tonight sponsored by Butler’s Muslim Student Association. Members of the Butler  and  Indianapolis communities will gather at 6 p.m. on the mall between Irwin Library and Atherton Union. Attendees are asked to wear white, if possible, to represent peace.

The native Hoosier’s desire to help others weaves throughout the stories of his capture.

But what hits home for Butler students is a matter of proximity: He’s a classmate. He’s one of us.

Kassig began taking classes at Butler University in the spring of 2011 after working as an emergency medical technician.

The Iraq war veteran and former Army Ranger was medically discharged from the U.S. Army in 2007.

During his spring break in 2012, he went on a trip to Beirut to do humanitarian work. In an interview with CNN, Kassig said the trip inspired him to follow his passion for humanitarian work in the Middle East.

“I needed to make a drastic decision. It was a huge identity thing; it was time to re-evaluate,” he said in the 2012 story. “I needed a game-changer.”

Overseas, Kassig stayed in touch with former professors and classmates and even Skyped a Butler class.

He worked in a Palestinian refugee camp in South Beirut, Lebanon, as well as a Lebanese hospital assisting Syrian refugees in 2012, during the height of the Syrian conflict.

Eventually, he started his own organization, Special Emergency Response and Assistance. With SERA, he organized the delivery of blankets, clothing, non-perishable food and medical supplies.

Kassig began to explore Islam before his capture, according to a statement his parents released Sunday. He “observed the month-long Ramadan fast in July through August 2013 prior to his capture, and spoke of the great impact this spiritual practice had on him,” according to the statement.

While traveling with SERA to Deir Ezzor in eastern Syria on Oct. 1, 2013,  Kassig was captured by ISIS militants, according a statement from his parents.

Between the date of his capture and December 2013, he willingly converted to Islam, according to his parents’ statement released Sunday. A statement from the Kassig family said that religion has “provided him comfort during a long captivity.”

“After converting,” the statement read, “he took Islam’s practices seriously, including praying the five daily prayers and taking on the name Abdul-Rahman.”

In a letter to his parents in June, Kassig said he was “at peace with his religion.”

CNN reported on Sept. 15 the exact number of captures cannot be determined because the “families tend to keep the captures quiet with fear of putting the victim in greater danger.”

ISIS recorded the execution of its first victim, James Foley, a U.S. journalist who went missing in Syria in 2012, and posted the clip on YouTube on Aug. 19. In addition, two British aid workers and a U.S. journalist were executed, each a few weeks apart.

In the most recent execution video posted on YouTube on Oct. 3, the British aid worker Alan Henning said moments before his execution, “Because of our Parliament’s decision to attack the Islamic State, I— as a member of the British public— will now pay the price for that decision.”

The video then panned over to Kassig, where an ISIS fighter, holding him by the nape of his neck, spoke to President Barack Obama.

“Obama,” he said, “you have started your air bombardment in Sham, which keeps on striking our people. It is only right that we continue to strike the necks of your people.”

Before the video with Kassig was released, the president addressed the country on Sept. 10 with a speech discussing actions he planned to take against ISIS to help fight against these attacks, referring to the group as the Islamic State in Iraq and the Levant (ISIL).

“Last month, I ordered our military to take targeted action against ISIL to stop its advances. Since then, we have conducted more than 150 successful airstrikes in Iraq,” Obama said in the address. “These strikes have protected American personnel and facilities, killed ISIL fighters, destroyed weapons and given space for Iraqi and Kurdish forces to reclaim key territory. These strikes have helped save the lives of thousands of innocent men, women and children.”

ISIS, also known as ISIL, started as an al-Qaeda affiliate.

In October 2006, al-Qaeda leader Abu Ayyub al-Masri created the Islamic State in Iraq, according to reports by CNN, ABC and Fox.

In April 2010, Abu Bakr al-Baghdadi became the appointed leader of the Islamic State in Iraq.

On April 8, 2013, ISI asked to join forces with al-Qaeda backed militant group al-Nusra Front, changing the group’s name to Islamic State in Iraq and the Levant. However, al-Nusra Front declined, causing a clash between the two groups. Due to the conflict, al-Qaeda cut off ties with ISIS in February this year.

ISIS aims to form an Islamic state across Sunni areas of Iraq and in Syria, according to CNN reports. ISIS declared the creation of this Islamic State, also known as Caliphate, on June 29. Since June, ISIS has taken control of all the cities between the Syrian city Deir Ezzor and the Iraq border.

According to a statement made by a CIA spokesman Ryan Trapani on Sept. 11, ISIS continues to grow. The CIA estimates ISIS has between 20,000 to 31,500 fighters spanning across Iraq and Syria, more than tripling the previous estimate.

“This new total reflects an increase in members because of stronger recruitment since June following battlefield successes and the declaration of a caliphate, greater battlefield activity and additional intelligence,” the spokesman said.

In the speech he gave on Sept. 10, Obama addressed how the U.S. plans to “ultimately destroy” ISIS.

“It will take time to eradicate a cancer like ISIL,” he said. “And any time we take military action, there are risks involve—especially to the servicemen and women who carry out these missions.”

As Obama focuses on the country’s plans for ISIS, other political figures direct their attention to Kassig’s future.

“At this point we have no reason to doubt the authenticity of the video released earlier today,” National Security Council spokeswoman Caitlin Hayden said in a statement issued Oct. 3. “We will continue to use every tool at our disposal—military, diplomatic, law enforcement and intelligence—to try to bring Peter home to his family.”

Kassig’s parents have corresponded with their son since his capture one year ago and have shared parts of his letters with the public.

In a letter to his parents released Sunday, Kassig said, “I am obviously pretty scared to die, but the hardest part is not knowing, wondering, hoping, and wondering if I should even hope at all. I am very sad that all this has happened and for what all of you back home are going through. If I do die, I figure that at least you and I can seek refuge and comfort in knowing that I went out as a result of trying to alleviate suffering and helping those in need.”