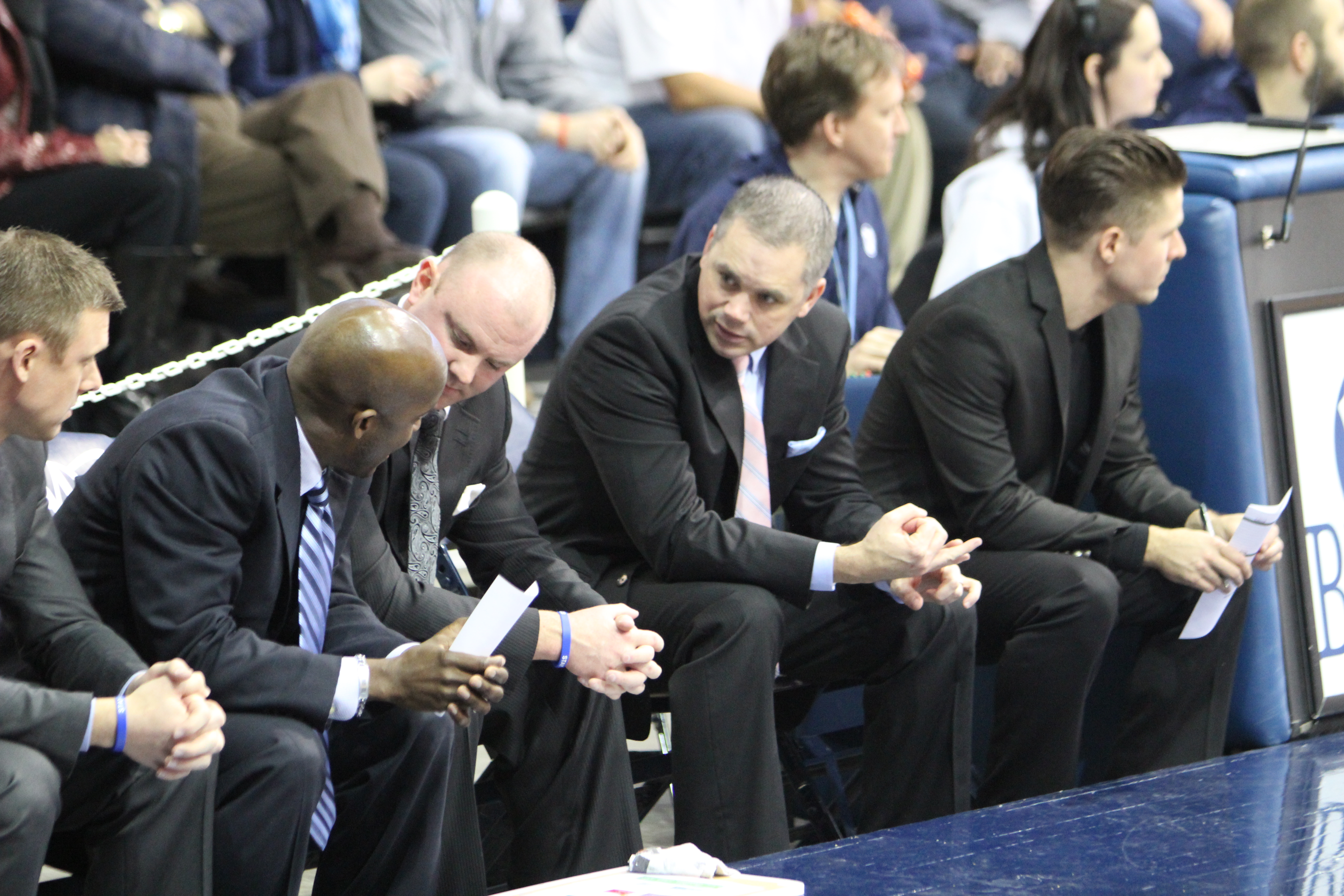 The Butler men’s basketball team began practice over the weekend in a rare situation.

Head coach Brandon Miller is taking a medical leave of absence from the team, the university announced last Thursday. It has not released a reason for Miller’s leave, nor has it set a timetable for any possible return, leaving Chris Holtmann at the helm as interim head coach.

Junior Kellen Dunham, the leading scorer during the 2013-14 season, said the team was ready for the news and it will move forward with the season.

“We’re definitely going to take it in stride,” Dunham said. “I think our leadership is better than it was last year, we aren’t getting too antsy or uncomfortable about the whole situation, but we’re treating it as a challenge, and we’re going to keep Coach Miller in our prayers.”

Holtmann joined the Bulldogs’ staff shortly after Miller was hired last year, after Brad Stevens announced he was leaving for the NBA’s Boston Celtics.

Dunham said they’ve gotten to know Holtmann over the last year and expect little change in the way things are run.

“We like Coach (Holtmann) a lot, as well as Coach Miller.” Dunham said. “He’s really detail-oriented—he fills the Butler tradition up in that aspect—and he carries on our core values. We are looking forward to playing for him and excited to get going.”

Redshirt junior Roosevelt Jones returns to the Bulldogs after sitting last season out due to a broken wrist suffered on the team’s offseason trip to Australia July 2013. Jones said he took that time to get acquainted with the entire coaching staff.

“I was sitting out, and I was with the coaches a lot, so I got to know him really well, so I’m pretty comfortable with him being our head coach,” Jones said.
Holtmann said, while the team is getting prepared for the upcoming season and expects the transition to go smoothly, it is still focused on Miller’s health.
“I think, first and foremost, our thoughts are with Coach Miller and his family. That’s first and foremost, that’s most important,” Holtmann said. “Butler is about people, and that’s most important.”

With the first exhibition game against the University of Chicago on Nov. 1, the Bulldogs head into the season with a relatively experienced roster, with just three freshmen. But those freshmen will be expected to play a big role this season.

One of those freshmen is Jackson Davis, 6’8” forward from Lexington, Kentucky. Davis said while he committed to Butler under Miller, he is fully prepared to play for Holtmann.

“It’s the same coaching staff that recruited me, the only thing that’s missing is Coach Miller,” Davis said. “I know they’re going to do a great job, and I’m here to listen to everything they have to say and just do my best.”

While Jones was to be the leading returning scorer (10.1 ppg) from an NCAA tournament team in the 2012-2013 season, he said he is gearing up and itching to play again.

“I’m ready,” Jones said. “I wish we could start games right now, I haven’t played in a year, so I’m ready to get back on the court.”

The Bulldogs begin the regular season on Nov. 15 at home against University of Maine. Hinkle Fieldhouse is under renovations, slated to finish before the season begins, that will include for the first time ever a video scoreboard hanging above center court and digital scoreboards around the concourse.

Jones said that is definitely adding to the build-up of excitement leading up to the season.

“We haven’t seen it yet, so I can’t wait until we can practice on the court again, so I’m getting real excited for this year,” Jones said.
Holtmann said he’s excited for the players to get out and play in the “new arena.”

As for the nerves of becoming a head coach at a Big East school, Holtmann said he hasn’t let it all sink in to even think about that.
“It’s been so hectic that I haven’t really had a chance to get nervous,” Holtmann said. “But I think I will really just try to be locked in on serving our players as well as I can serve them.”