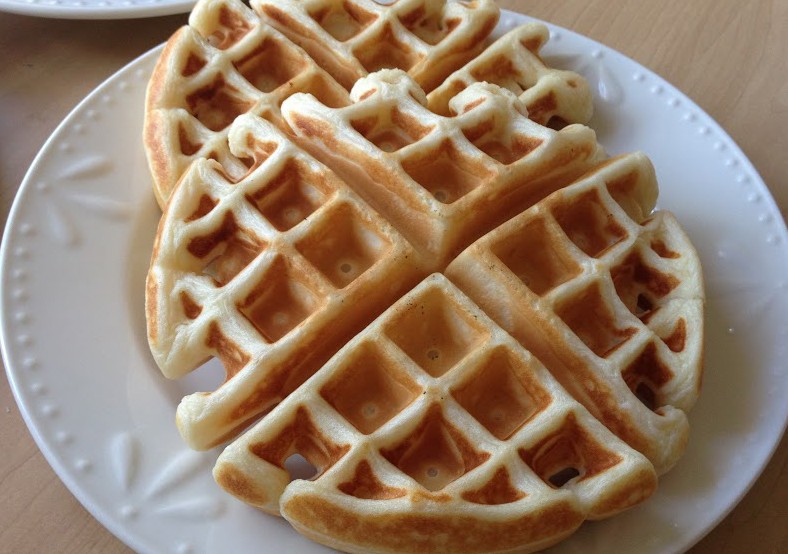 National Waffle Week was the first week of September, and the entire month is dedicated to honoring National Breakfast Month. In recognition of these notable dates, I decided to try out a few different waffle recipes and shares the best.

The first recipe I made was for cinnamon roll waffles. I found the recipe on Pinterest on a blog called Recipe Girl.

The recipe called for the following ingredients:

To make these waffles, first mix together the flour, sugar, baking powder, baking soda and salt and then set the mixture aside.

Next, mix the eggs, buttermilk, oil and vanilla and then combine into the dry ingredients. The mix should be slightly lumpy.

Spray a hot waffle iron with non-stick spray and pour the batter in. Cook your waffle based on the instructions from your waffle iron or gauge the steam rising from the iron. When the steam is at about one-fourth its original strength, the waffles are done. Remove using a fork.

The first is a cinnamon topping:

Mix all these together and set aside.

The second topping requires the following:

Heat up the butter and cream cheese in a microwave for about a minute, or until you can mix them together until smooth. After that, beat in the powdered sugar and vanilla and combine the mixture until there are no lumps and apply toppings to taste.

I thought the cinnamon roll waffles were delicious. Senior Katie Califano described them as “a less sweet cinnamon roll-but in a really good way.”

These waffles were easy to make and took between three and five minutes each. Once they were done, they were completely worth all the effort it took to make them, which wasn’t much. I would give these a five-star rating.

The next waffle recipe I tried was a banana bread waffle recipe. I once again turned to Pinterest for this one and found it at the blog I Love Eating, ihearteating.com.

Next, in a separate bowl mix together the buttermilk, vanilla, bananas and butter.

Combine the wet and dry ingredients and stir until combined. This mixture will also have some lumps in it.

These waffles tasted exactly like banana bread in waffle form. Personally, I would rather have banana bread in bread form, but if you are a fan of both waffles and bananas, I would say this is the recipe for you.

Because of the less-crispy nature of the waffles and the extra time it took to make them, I would rate these waffles three stars.

Finally, I decided to take a step back from the different varieties and make plain Belgian waffles. I used a family recipe which called for the following ingredients:

To achieve an even lighter waffle than usual, first separate the eggs and whip the whites until they are stiff, then set these aside. If you would rather not spend the time to do this, using the egg whole works well too.

Next, combine the flour, baking powder and salt and mix together thoroughly before setting aside.

Then, combine the egg yolks with the milk and oil. I used buttermilk for mine but regular milk will also work.

Stir in the flour mixture with the egg, milk and oil and combine well. There should not be many lumps in this batter. After that, if you decided to whip the egg whites, fold them into the mixture until just combined.

Cook them in a waffle iron, as mentioned in the other recipes, and enjoy! These waffles turned out very light. Califano took one bite of them and pronounced them “delicious!”

These waffles took about three to five minutes to make and turned out crispy on the outside and soft in the middle. I would give them a five-star rating.

Each of these recipes makes about six waffles.  You can use either a Belgian waffle maker or a regular maker and achieve the same results.

The ingredients for all of them were all common baking supplies, besides buttermilk and, perhaps, items such as powdered sugar and cream cheese. I found the waffles inexpensive to make and worth the effort.