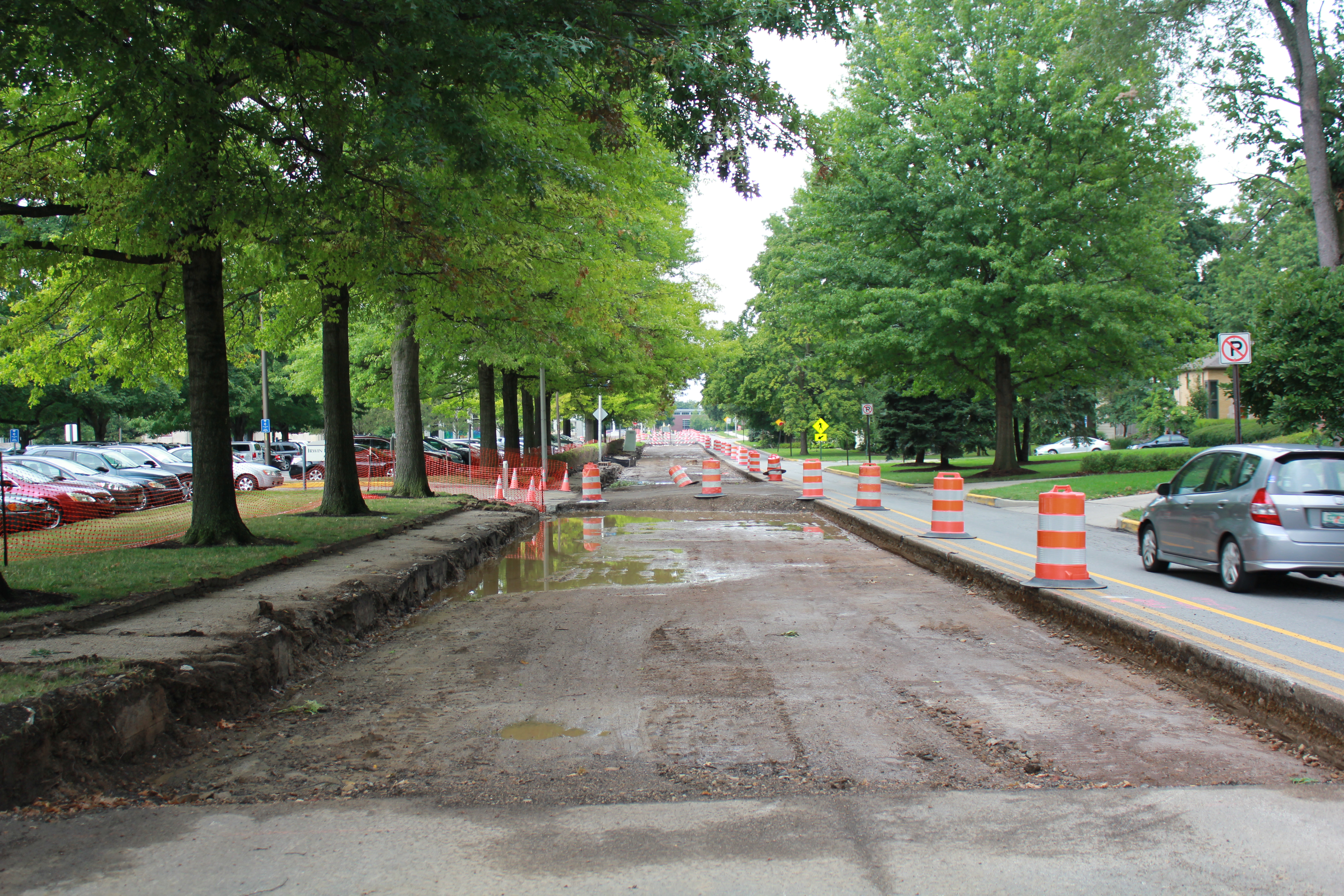 The gateway to Butler University is getting a whole new look.

The construction on Sunset Avenue is part of the Streetscape project, which aims to beautify entrances to campus.

This project is expected to be completed by June 2015.

Medians lined with trees will divide Sunset Avenue.  Bike lanes and sidewalks will serve as its border. Energy efficient street lamps will illuminate the street, and new signs will improve navigation.

“In the future, when the Streetscape is done, when you come onto campus, you will know it,” said Michael Kaltenmark, director of external relations. “There will be a median lined with trees and the roads will be nice and the presentation will be beautiful.”

“It will feel safe, and I think it is going to be fantastic,” he said.

The project began in March with construction along the curve from Sunset Avenue to 49th Street.

The southbound lane of Sunset is shut down. This portion of of the road should be  completed before winter.

Work will halt during cold weather. The northbound lane will undergo construction when the weather gets warmer.

The construction creates obstacles for people who live on Sunset Avenue.

Senior Sarah Rooksberry lives in an off-campus house across from the Schrott Center’s parking lot on Sunset Avenue. She said the site is dusty and smelly.

“I’m just ready for it to be over,” she said. “But they have tried to work with us, which I appreciate.”

She said the construction makes it difficult to drive.

“I can only go one way,” Rooksberry said. “It’s hard to get out of my driveway, or I didn’t have one at all.”

“For the most part, I think that if we are good about educating our constituents about the construction that is happening and then how they can deal with it when they come to campus, I think people are going to give us a pass and figure it out and make it work,” Kaltenmark said. “A year from now, (they will) really enjoy the benefits of having to deal with it this year.  Once it is done, there is an added value for guests that come to campus.”

Rooksberry said she does see the positives of the project.

“The new sidewalk is awesome,” she said. “It is so much more convenient.”

Despite the interruption, Kaltenmark said he does not predict a decrease in attendance to basketball games but is unsure about the attendance at other events.

“I am worried, a little bit, about our performing arts,” Kaltenmark said. “But we have such a strong lineup of performers coming to Clowes and the Schrott, so, even then, I think people are going to make do.”

The construction also interferes with parking on Sunset Avenue. When the project is done, all street parking will be eliminated.

“Although parking is always an issue, it eliminates the vehicular clutter,” said Rich Michal, executive director of facilities.  “Typically, when classes end, there were cars parked on both sides of Sunset–and now that is eliminated.”

However, this project will not reduce the amount of available parking spots on campus.

“One thing we give up is parking along Sunset, which was pretty handy,” Kaltenmark said. “But we are going to get that back, and then some, when we get the garage. When the garage is built and done, there will be parking along Sunset again, but it will be contained into one garage, so cars won’t line the streets, which will be nicer and safer.”

A bus pullout will be constructed to help combat the parking problem, Michal said. Mass transit has not been a part of Butler’s campus since the 1990s.

“Everyone is concerned about parking, understandably,” Michal said. “So what we are trying to do is identify other options for folks for transportation. Mass transit would be a great option because then faculty and staff could take mass transit for their daily commute. Students could take mass transit to get downtown to fulfill their cultural requirement, to do their student teaching and all those things.”

The improvements will cost about $3 million.  Butler partnered with Indianapolis for this project.

“It was a great partnership for Butler to engage in with the city,” Kaltenmark said.  “We worked with the city to make this happen. We put up half the money; they put in the other half.  I think the city is going to benefit out of it, because these are city streets. It is also the gateway to campus, so we benefit as well.”

Kaltenmark said Butler hopes to expand the Streetscape project to other streets on campus, such as Clarendon Road and Hampton Drive.

“There are other gateways to campus,” he said. “So let’s see how this one goes and let’s get this one done and see if we can tackle the others. I think everyone is interested, but it really comes down to a funding issue.”