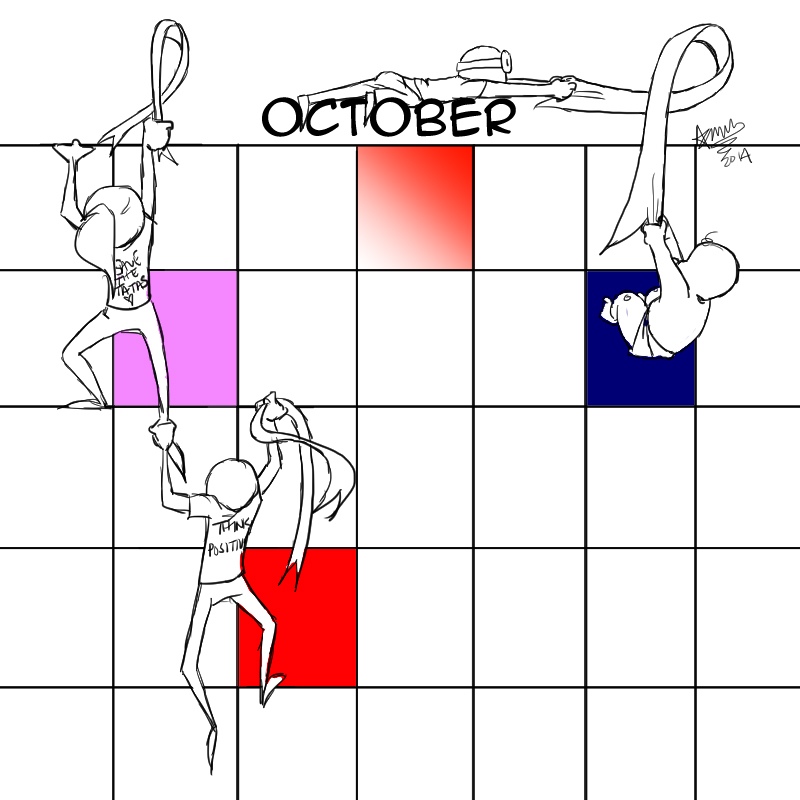 All five of these causes have October dedicated as its awareness month. But these are not the only five; October is dedicated to a total of 18 different awareness subjects.

Despite this, October is commonly known as Breast Cancer Awareness Month, with its pink attire and ribbons displayed in almost every supermarket across the nation, with the Susan G. Komen Race for the Cure in the near future. It is well-known. Survivors are celebrated, and others are remembered.

But the 17 other issues are often brushed aside, out of the limelight.

Generally, each of these subjects hold a significance that should be recognized just as breast cancer is.

However, few of us are willing to go out of our way to start a movement to promote dental hygiene. (But hey, if any of you are interested, send a message my way and we can put something together.)

Why can’t stores start selling visors and key chains with blue and yellow ribbons for Down Syndrome awareness—or towels and coffee mugs with pearly white teeth to celebrate dental hygiene?

Also, Lupus awareness is just as important as the next awareness, but it is hardly recognized by the public in October.

Granted, I am not saying that there is absolutely nothing done for some of these. There are several articles written regarding the March to End the Silence on Domestic Violence and a number of walks dedicated to AIDS awareness. But the issue is how many citizens participate in, or are even aware of these events.

While the million mark may seem like a sufficient amount of money—and there is no denying that it is a massive amount of money—this appears to be a measly number when compared to the $2.5 billion Susan G. Komen Race for the Cure has raised since its formation in 1982.

Despite the three-year start difference between the organizations, the fundraising difference is undeniably significant.

Since the breast cancer awareness movement is brimming with supporters, fundraisers and funds in general, why isn’t the public eye administering the same focus on movements toward AIDS, Rett Syndrome, and pregnancy and infancy-loss awareness?

If we try to become more knowledgeable of each awareness in October, I think individuals will begin to make a difference—even if it is just by spreading the word about a particular cause. After all, making a difference is not always built on funds.

Each cause deserves equal recognition—even if it is recognition for the cleanliness of the furnishings of our mouths. (Again, e-mail me if you’re serious about dental hygiene.)