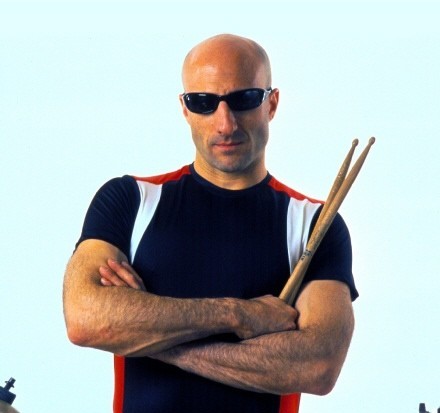 From John Mellencamp, to Iggy Pop to Taylor Swift, Kenny Aronoff has played with a variety of popular musicians. This past Friday, he played at Butler University.

In a performance loud enough to leave your ears ringing, Aronoff played along with tracks as well as talked about all the valuable lessons he has learned throughout his career.

Aronoff made the show both entertaining  and personal by rotating between drumming and speaking throughout.

The drummer began his performance with a drum solo that reverberated beyond the closed doors of the Schrott Center.

With a beaming smile on his face, Aronoff played the drums without a background track to open the concert, giving everyone a taste of what was to come.

Aronoff’s stick heights and the bone-rattling loudness of his drums didn’t seem to phase the drummer as he calmly stepped out from behind the set and transitioned into his first speech.

Aronoff touched on his college years, saying that “education is everything.”

He also emphasized the benefits of dedication and hard work, saying “I worked my butt off to get here.”

Before once again climbing behind his drums, Aronoff spoke about his audition for Mellencamp.

Aronoff’s professional website declares: “in 1980 he joined the John Mellencamp band, recording 10 albums and touring with him over a 17-year period.”

“I had the skills to get me where I needed to go,” he said, reiterating the importance of hard work in acquiring skills.

To showcase his work with Mellencamp, Aronoff played a medley of Mellencamp songs, including “Hurts So Good” and “Pink Houses.”

The tracks to these songs played in the background while the drum part reverberated through the room from Aronoff’s hands.

When the tracks stopped playing, the theatre-— even with applause— sounded quiet without the music filling every corner. Aronoff stood back up, moved in front of his drums, took his sunglasses off and began talking again.

This time, he spoke of his more recent career and all the various people he has played with, including Lana Del Rey, Adele, and Trace Adkins. He compared being a drummer to acting, saying that for each style of music he plays, he has to put on a different face.

Aronoff recalls the reporter of one particular interview inquiring as to why an artist needing a drummer should choose Aronoff over anyone else.

For his penultimate drumming display, Aronoff diverted from his well-known Mellencamp hits to draw attention to the diverse group of artists that he has performed with.

The display included “Heaven is a Place on Earth” by Belinda Carlisle and “My Happy Ending” by Avril Lavigne.

“It was really incredible” said freshman Kelly Schmidt. “I felt like time just flew by while he was up there.”

Once the echo of the drums died down, Aronoff continued with the theme of hard work, but spoke more of himself in relation to other drummers.

Aronoff compared various styles of drumming to apples and oranges, saying, “It’s all good fruit, but can’t be the same.”

Throughout the entire performance, Aronoff had a huge smile on his face, as though there were no happier place for him than behind this drum set.