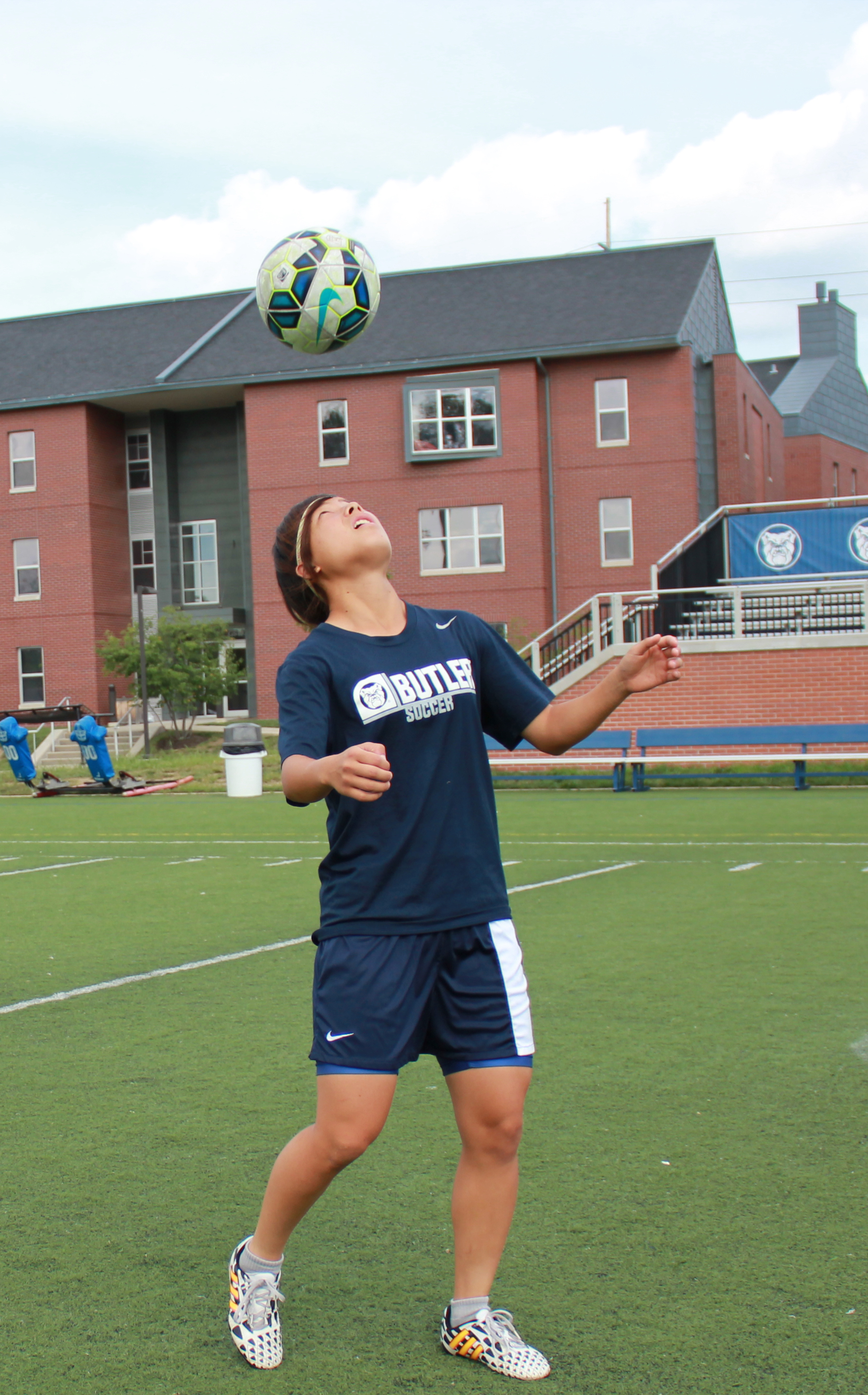 Approximately 6,700 miles from her hometown of Hiroshima, Japan, Serina Kashimoto arrives at the Butler Bowl. It’s a Wednesday. There’s no practice for the Butler women’s soccer team. The team is required to have a day off with a game coming up Friday. Still, Kashimoto and a couple other players are on their own on the field running through drills.

Four days later in the same place, Kashimoto controls the ball in a game against IPFW. She uses her quick feet to deceive members of the other team as to where she will pass the ball. They fall for it most of the time and she gets an open pass. Her teammates say this is her signature move.

“She’ll face one way,” senior Laura Luther said,” So, the defender will come and is like ‘Oh I’m going get this ball’ and then just very casually, nope, go the other way. And it’s so simple but yet so effective.”

Luther said Kashimoto is always working on her game and she never seems to tire. She even referred to her as the Energizer Bunny.

This nonstop dedication to the game, along with her natural talent, is what allows Kashimoto to excel.

“She spends so much time outside of practice just working on her game,” Luther said. “Whatever she can improve for herself is what she’s looking to do for the team so we can be where we want to be with our goals.”

Soccer was always a part of her life because her father and grandpa play it too, and she got an early start.

“I think, just for having fun, I was playing soccer since I was three or four,” Kashimoto said, “but I actually started with my team when I was nine.”

Kashimoto had been to the United States before coming to Butler to participate in a training camp for the youth national team she was on. But that was held in Florida. So how did someone from Japan hear about Butler University? The answer lies in one of the assistant coaches of the Butler women’s soccer team, Elise Edwards.

“Coach Elise, she used to play in Japan as a professional player so she has many connections in Japan,” Kashimoto said, “and my coach from high school he’s a friend of Coach Elise. Coach Elise would sometimes visit my high school, like probably once a year and she kind of got me here.”

Once she got to Butler and played her first season as a Bulldog she started to get recognized for her success on the field.

Before the start of this season, she was named to the preseason All Big East team as a sophomore. Kashimoto said she wasn’t sure how to react to the praise because she knew she had to play well and she is already 21.

“After the season my coach told me, ‘Oh you did really good,’” Kashimoto said, “but everyone thinks of me as a freshman but I’m already the age of a senior because I had to study English so I’m behind already, and I did redshirt because of my knee.”

In the summer months, Kashimoto plays for a pro-amateur team called the New York Magic.

Her coach for the Magic, Nino De Pasquali, a native of Italy. De Pasquali said Kashimoto learned a lot playing for him because of his background with the game.

“He used to be a professional player there,” Kashimoto said. “So he has very good experience as a player and also as a coach. It was very interesting to listen to him because his playing style came from the Italian playing style.”

Lyndelle Phillips, a manager for the Magic, said De Pasquali has been vocal to his players over the years about how beneficial it is to see different styles of play from different parts of the world.

Kashimoto has already built up an impressive repertoire from the styles that she has seen because she has played on teams with Japanese, American and Italian styles.

De Pasquali said he found out about Kashimoto through a recommendation from a former player. After meeting with Kashimoto, he got an idea of what she wanted to gain from playing for him.

“Serina played for the Japanese national team for their under 20 squad, and she played as a center back,” De Pasquali said. “When she came to me due to the recommendation she also told me that ‘I play defense or center back, sometimes midfield.’”

Hearing that she also plays midfield prompted De Pasquali to give her a shot playing that position. He wasted no time, giving her the start there in the first game of the season.

Kashimoto ended up having another award-winning season, this time playing midfield. She scored three goals and had two assists and was named to the Northeastern Conference All-Conference team in the pro-amateur league the Magic are in.

While she continues to have success and is making herself at home here in America, Kashimoto’s real home is far away. She will get to visit this Christmas, where she will be reunited with a member of her family she said she misses the most, her dog.