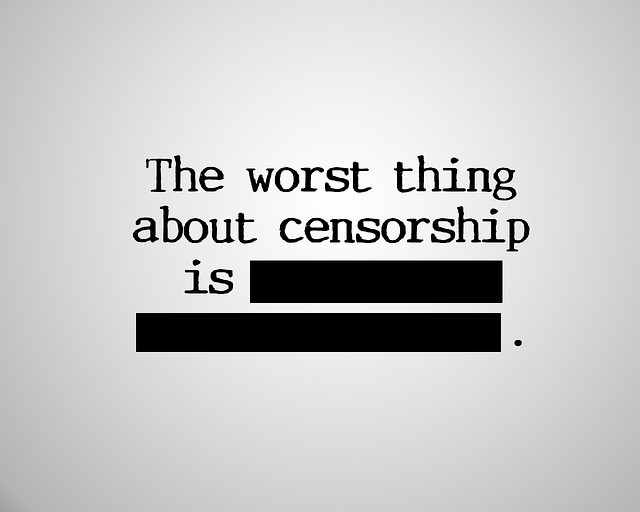 What do “The Great Gatsby,” “The Perks of Being a Wallflower,” “The Giver,” “Fifty Shades of Grey,” “The Hunger Games,” “Looking for Alaska” and “1984” all have in common?
They’ve all been banned or challenged at some time  in the United States.

The American Library Association’s website distinguishes between a ban and a challenge.

“A challenge is an attempt to remove or restrict materials, based upon the objections of a person or group. A banning is the removal of those materials.”

Challenges are more than a person disagreeing with literature. They are attempts to banish material from libraries or school curriculums.

The ALA sees challenges as threats to freedom of speech.

The last week of September is dedicated each year to “celebrating the freedom to read,” Banned Book Week’s slogan.

The event is sponsored by various big-name organizations, including the Association of American Publishers, Penguin Random House and the National Council of Teachers of English.

Banned Books Week began in 1982 when the number of challenges against books increased substantially, according to the organization’s website, www.bannedbooksweek.org.

The event “brings together the entire book community— librarians, booksellers, publishers, journalists, teachers, and readers of all types—in shared support of the freedom to seek and to express ideas, even those some consider unorthodox or unpopular,” the website said.

William Walsh, a professor in Butler’s English department, said he thinks censorship is nothing to worry about.

“The great era of banning books in America is pretty much over,” he said. “I think they gave up. The idea that you can keep books away from people is almost absurd.”

Especially with the presence of the Internet, people can access nearly everything they want at a moment’s notice, he said.

Amanda Starkel, an Information Commons and eLearning Librarian at Butler, said she agrees.

“Information wants to be free,” she said. “Personally, I think it’s dangerous to draw lines in the sand.”

In 2013, however, 307 challenges were reported to the Office for Intellectual Freedom.

The problem with challenging, banning, and censoring books is that we, as humans, only crave that which we can’t have, Walsh said.

“There are probably books that are bad for people, but it doesn’t do any good to ban them because it just makes their appetite more intense,” he said. “It’s like Adam and Eve and the forbidden fruit. Human beings hate to be restricted.”

In order to keep that appetite at bay, banned books should be encouraged rather than pushed to the side, said sophomore Anna Krukover.

“The media has mostly crossed every line possible,” she said. “Banning books will only spur a sense of curiosity in children and teenagers and it will only encourage them to go after these books just to see what the big deal is.”

Still, a desire to continue censorship in literature lives.

Within the past ten years, the American Library Association has received a challenge to almost every genre, encompassing everything from J.K. Rowling’s Harry Potter series to recent Butler visiting writer Tim O’Brien’s “The Things They Carried.”

Most challenges are “motivated by a desire to protect children from ‘inappropriate’ sexual content or ‘offensive’ language,” according to the American Library Association’s website.

Other books are challenged, and banned, throughout entire countries by governments who do not believe in giving their citizens the same freedoms as others.

If junior Gaby Avila travelled to Lebanon, she would not be able to read her favorite book, “The Diary of Anne Frank.” Lebanon banned the biographical diary in 2009 for its potential promotion of a governmentally unwanted religion, according to The Wall Street Journal.

The book is, however, available at Butler’s Irwin Library in more than five different editions.

One of Krukover’s favorite novels, “The Catcher in the Rye,” is also available at Irwin but is banned in numerous libaraies.

In fact, nine of the top 10 banned books in the world (as announced by cencorship.laws.com) are available right now in Irwin Library.

These include “Candide” by Voltaire and “The Satanic Verses” by Salman Rushdie. Number nine on the list, William Powell’s “The Anarchist Cookbook,” can be reserved through the InterLibrary Loan system.

“Everyone has the right to read what they want,” said Avila.“People should learn from different perspectives.”