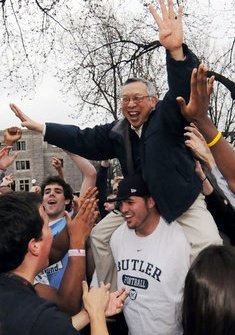 Butler’s 20th president, remembered by many for his crowd-surfing and coffee chats, died suddenly Monday morning.

Bobby Fong, 64, died of a heart attack in his home in Collegeville, Pennsylvania.

The news travelled quickly, and Butler University’s flags were lowered to half-mast.

“We were truly lucky to have Bobby for as long as we did,” said Ena Shelley, dean of Butler’s College of Education. “He made Butler such a better place, but he never felt the need to take the credit for it.”

“We lost one of the greatest bulldogs we ever had,” said Michael Hole, ‘08.

Fong was the son of Chinese immigrants. He grew up in Chinatown in Oakland, California, and began school without knowing English.

“Bobby always had a soft spot for teachers and for public education,” Shelley said. “Once, visiting Shortridge Elementary, he told me, ‘These kids remind me of me. I was in their shoes. And I feel like it’s my job to give them a chance, because someone gave me a chance.’”

Fong earned his doctorate in English Literature from the University of California, Los Angeles, in 1978.

He began his career in academia at Berea College in Kentucky, where he taught English for 11 years. He then moved on to a dean position at Hope College in Michigan, where he stayed for six years. He became the dean of faculty at Hamilton College in New York, where he remained until 2001. At the time of his death, Fong was serving his fourth year as president of Ursinus College in Pennsylvania.

Fong was inaugurated as president of Butler on Feb. 9, 2002. He was one of 20 Asian-American college presidents in the country at the time.

“I remember when he first interviewed,” Shelley said. “The most impressive thing about him, to me, was when he left. He insisted on shaking everyone’s hands and thanking them by name. He even stopped and shook the hands of staff members in the office and asked for their names. He just genuinely wanted to know their names.”

Shelley, who served as dean during Fong’s entire tenure, said he was remarkably approachable.

“You could talk to him for 15 minutes and walk away being like, ‘I just met the coolest guy,’” she said. “You would have no idea that you just met the president of Butler, because he is just so humble and so interested in other people.”

The president was known as “BoFo” by much of the student body.

“The students gave him that name and he embraced it,” Shelley said. “He thought it was hilarious.”

Fong was the first president to move onto Butler’s campus to live in what is now known as the president’s home.

His wife, Suzanne, and his sons, Jonathan and Nicholas (called “Colin”), were involved and active on campus as well.

“Bobby and Suzanne were a very special couple,” Shelley said. “She is an extraordinary woman. They had a great partnership.”

Levester Johnson, vice president for student affairs, said Fong made a splash during his first few months on campus.

Fong allowed employee benefits for same-sex partners as one of his first moves as president. He also pushed for Butler to make increased diversity a priority and connect Butler to the Indianapolis community.

“We lost our way for a little bit with (diversity) and remembering our roots,” Johnson said. “But Bobby was a huge proponent of encouraging diversity and building on Butler’s relationship with the city of Indianapolis.

Controversy stirred campus when Fong attempted to sue a student over a blog post he considered defamatory in 2009. The suit was eventually dismissed.

Fong came out in support of lowering the legal drinking age to 18, along with a collection of other American college administrators.

Johnson also served in his current position during Fong’s tenure. He said, in addition to his likability and sense of humor, Fong was a “deeply wise man.”

Johnson cried when he spoke about nominating Fong for a national student affairs award for college presidents.

“He was all that,” Johnson said.

Hole, who said he considered Fong a mentor, said the former president always seemed eager to listen to students’ ideas and concerns and incorporate them in the university.

“He really respected a group whose ideas probably aren’t normally so revered on a college campus,” Hole said. “And that’s the students.”

He first encountered Fong when a student group he led sought the president’s promotion for a project to build a schoolhouse in Uganda.

“He gained so much support for us at Butler and in the community,” Hole said. “And now Bobby Fong’s legacy can extend all the way to Uganda.”

He also inspired the tradition of a class picture, where freshman students stand in the shape of a Butler-themed item.

He led Butler through economic recession starting in 2008.

“He didn’t sign up for that kind of challenge,” Johnson said. “In that position, a lot of private universities would be forced to shut their doors. But Bobby left Butler just as healthy financially, if not better, than when he came in.”

“I don’t know that I can say that Butler’s entire culture was inspired by (Fong),” he said. “But when I think of Bobby Fong I think of someone who is genuine, kind, warmhearted and super smart. I think Butler has adopted that character, so it’s not hard to think that he had something to do with that.

“His accessibility and kindness in his leadership made an impression on me as a student, but you could tell it trickled down,” Hole said. “Because Bobby was the way he was, deans and administration and professors followed his lead.”

Fong regularly held president’s forums, where he sat in Starbucks with a sign on a small table and talked to students, faculty, staff, parents or anyone who wanted to chat.

“That kind of illustrated how visible and caring he was,” Hole said.

Johnson said Fong’s willingness to participate and “be the butt of the joke at times” set him apart from other college presidents.

“We made this video about flu season and washing hands,” Johnson said. “It was hilarious, just us guys standing in the bathroom, talking and washing our hands. It went viral and I had people from other schools ask me, ‘How did you get your president to do that?’”

Fong had an infamous obsession with baseball and the New York Yankees and was an avid baseball card collector.

“He could spew out baseball stats all day,” Shelley said. “I don’t know how he kept all that information in his head.”

But it took some studying for Fong to learn basketball lingo.

“He came to a basketball school, so he made an effort to learn all he could, but it was really rough at first,” Johnson said, laughing. “But he is a statistics man. He learned all the basketball stats he could. He couldn’t go toe-to-toe about offensive sets, but he could talk stats about players and teams and coaches.”

“We would go out to eat for most of our one-on-one meetings, but Bobby only wanted to go to these little hole-in-the-wall, off-the-beaten-path places,” Johnson said. “There would usually be one table with two chairs in the whole place. But those were his favorite.”

Johnson said Fong began all correspondence, to his memory, with “My Friends.”

“He gave this great speech, and then (Powell) walked up, and he’s this big huge man, a former Army general,” he said. “And Bobby Fong walked right up and hugged him. It was hilarious.”

Hole, who was awarded Butler’s Outstanding Male Student Award in 2008, said Fong’s support made all the difference in the rest of his career as a student and doctor.

“He told me that he was proud of me,” he said. “Which was unbelievable coming from such an accomplished and outstanding person. I think, if it wasn’t for him, I wouldn’t have had the belief in myself to apply and go to Stanford (University) or to go on to Harvard (University).”

Hole, who is a resident at Boston Children’s Hospital, still wrote letters back and forth with Fong.

Johnson exchanged emails with Fong during the week before his death, and “in his typical Bobby way, was totally focused on how I was and how the Johnson family was doing,” he said.

Shelley nostalgically pulled up a picture of the day she and Bobby signed papers finalizing the Butler and Shortridge partnership.

“I just feel very fortunate that our lives crossed,” Shelley said. “I am so grateful to know him and Suzanne and the boys, and I hope that they know that they left their handprint on Butler.”