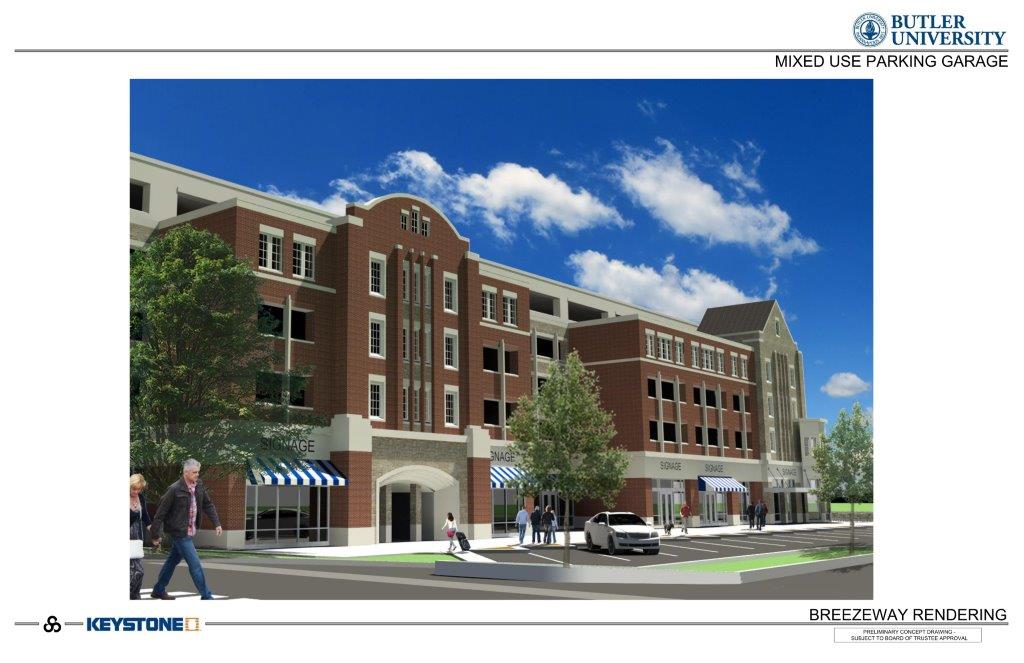 The new parking garage will hold more than 1,000 cars and house vendors.

The last, little brown house on the Berkley knoll sits on the corner of Sunset Avenue and Berkley Road.

Catherine Golden has lived in that house “forever.”

She wants to stay there just as long.

The issue that Golden and other Butler-Tarkington residents expressed concern with is the amount of cars lined on the street in front of her house.

The issue? They aren’t hers.

Butler students and visitors park in nearby neighborhoods instead of on campus.

“I would appreciate if they would respect the people who have been living in this neighborhood forever,” Golden said. “If they would please leave parking for them and other residents, so they will feel safe when coming home at night and leaving early in the morning.”

The city of Indianapolis told Butler University it needs more parking before any expansion could take place, which is the reason for the new parking garage.

The five-story structure will hold more than 1,000 cars. Faculty, staff, visitors and commuters will park there.

Bill Weber, assistant chief of police, said this is because they want the garage to have constant turnover.

“Butler has needed for a parking garage for many years,” Weber said.

“Anytime we’re doing expansion, Indianapolis is interested in how we’re doing parking,” Bruce Arick, vice president of finance, said. “They did say they like the plans, but we’re going to have to address the parking before we can move ahead with those plans. We understood and didn’t disagree with that.”

The addition of the parking garage will allow for new residence halls, renovations and additions on buildings.

“This is really a critical first phase of a lot of phases of projects that will go on for the next probably five to eight years,” Arick said. “We have to get the parking on campus covered first before we can begin on those projects.”

Administrators  met with city planners for the past 19 months to discuss the garage and brainstorm how to resolve the issue of event parking, Chief of Staff Ben Hunter said.

“Over the summer and during the general school day, we don’t have a parking issue,” he said. “Students faculty and staff can argue the convenience of where those parking spots are at, but we have the capacity. When we start to stretch capacity is when you have events and conferences. In a university that’s vibrant like Butler, you need a larger parking capacity on top of the regular university parking.”

Hunter said the parking garage will most likely have enough parking to facilitate future buildings.

“We are confident, and the city is confident in advising us that the parking facility is going to meet the need for future building growth on campus,” Hunter said.

“If you can put in a few hundred spots on campus, it’s a few more hundred cars not parking in that neighborhood,” Weber said. “This is potentially a few less hundred complaints the university and the city have to deal with. We’ve gotten many calls.”

The university is working on a new game-day parking management plan that will likely go into effect this season to solve the parking issue before the garage is finished.

The construction of the facility will cost $23 million, but Arick said it will be funded by itself.

The side facing Sunset Avenue will be leased out by vendors in the area for advertisement. Butler will also charge for parking in the garage during events.

The garage construction will begin as early as Sept. 8.  The garage will be completed in August 2015.