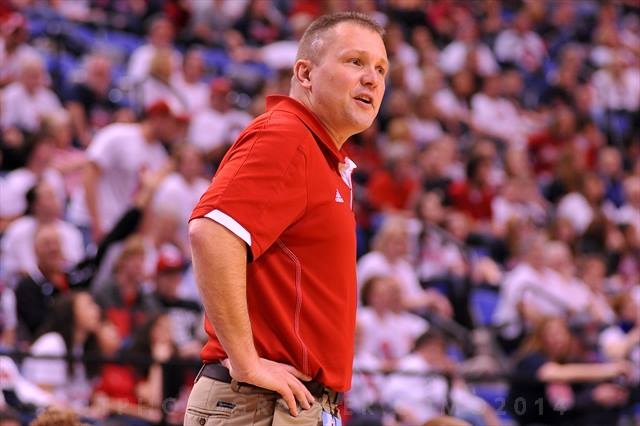 He would get up at 6 a.m. in the little town of Heltonville, Indiana, and go to the gym to shoot free throws.

He would come home and shower before going to school. Afterward, there would be more basketball. Next day: same routine.

It was the stuff of Indiana legend. It was Damon Bailey’s reality.

“I remember him playing elementary ball,” said Dan Bush, his high school coach. “You could tell even then that he was a special player, as he turned out to be.”

Now, Bailey’s journey brings him to Hinkle Fieldhouse, where he will be an assistant coach for the women’s basketball team.

“Butler is still Indiana basketball,” Bailey said. “It is a hard-working university with strong academic kids that work hard. In today’s world, that is pretty unique.”

That description sounds a lot like Bailey, who garnered national attention as an eighth-grader when former Indiana University coach Bob Knight raved about him in John Feinstein’s 1990 book “Season On The Brink.”

“Damon Bailey is better than any guard we have right now,” Knight was quoted in the book as saying. “I don’t mean potentially better, I mean better today.”

To this day, Bailey considers the compliment a huge honor.

“You have to keep everything in perspective,” he said. “At some level that was Coach Knight being Coach Knight, but to know you have the ability to be recruited by a coach of his stature at such an early age was a big thrill.”

For Bailey, it was a coming-of-age moment. He was thrust into the spotlight and has never really left.

“I really don’t know anything different,” Bailey said. “I was playing a game I loved and I had dreams and aspirations of things I wanted to accomplish. Everything that came along with it, you just dealt with it.”

While he was making national headlines, Bailey also formed a friendship with another Bedford resident, current head coach of the Butler women’s basketball team, Kurt Godlevske.

Godlevske and Bailey grew up together and played together for Bedford North Lawrence for one season before Godlevske moved to Michigan. Godlevske was a sophomore, Bailey a freshman.

“Playing with him was a great experience because he does what you want your players to do, and that is make everyone around him better,” Godlevske said. “He had a unique knack for putting people in places where they could be successful.”

Bailey’s individual accomplishments at Bedford North Lawrence surpassed the expectations placed on him by the fans and throngs of media. As a freshman in 1986, Bailey averaged 23 points per game while taking his team to the Final Four in the state tournament. He was named to the All-State team that year—an honor he received three more times.

He led the Stars to the brink of the title each of his first three seasons, but the team found a nemesis each year. First it was Marion. Then it was Muncie Central. His junior year, Floyd Central knocked them out.

By the time his senior year came, it was do-or-die.

Bedford North Lawrence had to win eight games in the postseason tournament to punch its ticket to the title game. The only thing standing between Bailey and a state title was top-ranked Concord.

With the championship game on the line, Bailey took over. He scored the team’s final 11 points. Bedford North Lawrence needed each one. At the final buzzer the Stars won 63-60 .

“You want your best player to have the ball,” Bush said. “We knew either he would get a shot, or he would get a good shot for someone else. Fortunately, he was able to deliver, as he did most of the time.”

Bailey was named Indiana Mr. Basketball in 1990 while leading the Stars to a state title.

When high school was over, Bailey had scored a state record 3,134 points. He won four All-State honors, an All-American title, and an Indiana Mr. Basketball Award.

Yet what impressed his former coach more than his basketball accomplishments was the way he went about his business.

“He was a joy to coach,” Bush said. “I never had one problem with him in four years. He could’ve dogged it and still been the best player, but he never did that. He worked hard every night.”

The next chapter of Bailey’s career would come at Indiana, where he played under Knight for four seasons, from 1990-1994.

Despite the controversy surrounding Knight and his coaching techniques, Bailey said he had a positive experience.

“Playing for Coach Knight was not easy,” Bailey said. “There were good times and bad times, but over all the four-year period I was there, we were very successful. You learn a lot from him – not just basketball things, but a lot of life lessons.”

One of those lessons he learned was the importance of hard work.

Bailey’s collegiate playing career included a trip to Hinkle Fieldhouse for the opening game of his senior season on Nov. 27, 1993. Butler came away with a 75-71 win.

Despite the loss, Bailey remembers a frenzied atmosphere in the fieldhouse.

“Being a player that grew up in Indiana, appreciating the history of Hinkle, we came in there and it was a great atmosphere,” he said. “With it being a Butler home game and there being a lot of IU fans, it was a hostile environment.”

Bailey was drafted in 1994 by the Indiana Pacers, but his career quickly faded after a number of injuries.

After a reprieve from the game, Bailey returned on the sidelines as a coach for his high school alma mater.

He was an assistant girls basketball coach under his childhood friend Godlevske during the 2012-13 season, when the Stars went undefeated and captured a state title. Godlevske left in the off-season to coach at Butler, and the head role was Bailey’s for the taking.

It was a difficult decision for Bailey. In fact, he said he likely wouldn’t have chosen to leave the path he was on were it not for the circumstances.

“A friend asked me to help,” Bailey said. “I was at a point where I was content with the way things were going and wasn’t looking for anything new. There’s only a handful of people I would do this for or with, and Kurt is one of those people.”

Godlevske, who replaced Beth Couture in May as the Butler women’s coach, said the move instantly takes the program to new heights.

“I think it brings us instant credibility,” Godlevske said. “Not just within the state but nationally. There aren’t very many Amateur Athletic Union (AAU) coaches who don’t know who he is and what he’s about. It lets the state know that if your daughter comes to Butler, you’re going to get not only the quality education we have to offer, but also a great experience on the athletic side. For us to be able to offer that is hard to put a price tag on.”