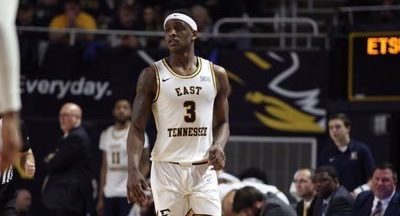 Bo Hodges brings the ball up the court in a game earlier this year. Hodges will join Butler’s men’s basketball team as a senior in 2021-22. Picture courtesy of @ball_bo on Twitter.
DREW SANDIFER | SPORTS EDITOR | dsandife@butler.edu

East Tennessee State transfer Bo Hodges announced via Twitter on May 25 that he will join the Butler men’s basketball team for his final season of eligibility.

Per NCAA rules, Hodges will sit out for the 2020-21 season and be eligible to join the Bulldogs on the court for his senior year in the fall of 2021.

Led by Hodges, the Buccaneers won the 2020 SoCon Men’s Basketball Tournament and were set to appear in the 2020 NCAA Tournament.

Hodges chose to transfer to Butler over Arkansas, Minnesota, Tennessee State or returning for another year at ETSU.