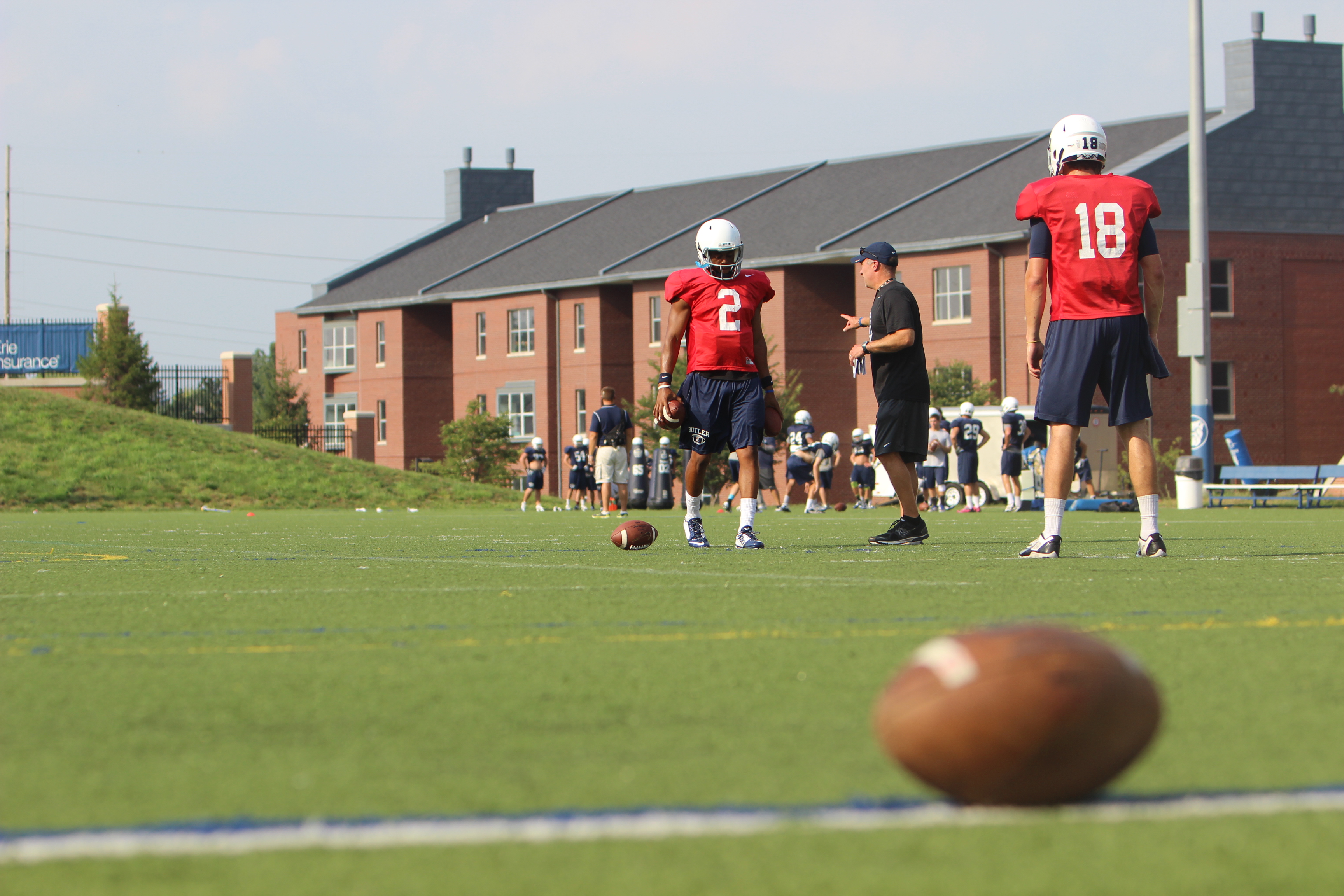 Head football coach Jeff Voris jogs to midfield in his blue shorts and white t-shirt. Dripped in sweat, he gathers up the special teams unit, gives them a pep talk, breaks the huddle and jogs back to the sideline.

Ian Dobek kicks the ball deep and Marquese Martin-Hayes returns it to the 30. Voris runs back out to midfield and they do it all again.

Soon, with the team’s music mix tape blaring over the Butler Bowl loudspeakers, Voris gives a signal and all the different units break and take a knee near the end zone.

With a quick reminder about team meetings after dinner at the Atherton dining hall, yet another day of summer camp two-a-days is over.

The Bulldogs have some time to work some kinks out before the season kicks off Sept. 6 at Division III Wittenberg. Voris says the young team is slowly but surely getting ready for that point.

One of the kinks yet to be worked out includes a quarterback competition between redshirt sophomore Malcom Weaver and redshirt junior Matt Shiltz.

With two-year starter Matt Lancaster leading the way for Butler, neither player has seen time at the position for the Bulldogs, but both contributed in their own ways last season. Shiltz spent time playing on the special teams unit, while Weaver played around 200 snaps at wide receiver.

“Both those guys were quarterback recruits that saw that they weren’t going to play last year, but wanted to help the team and moved to other positions,” Voris said. “They’re great teammates.”

Shiltz said he’s in a unique situation trying to become a starting college quarterback alongside one of his best friends.

“We’ve had a healthy competition, not only this year but the previous two years,” he said. “We both want each other to succeed, but at the same time, we both want to be on the field.”

“We know that only one of us can be back there, and once the season starts it’s going to be up to us to lead the team and be successful.”

Weaver said being close friends with Shiltz has only helped fuel the competition.

“We’ve helped each other out throughout the years leading up to this point,” Weaver said. “Even with the battle coming up, everything is still friendly and there’s no hostility between us. But obviously we both want to be on the field and we’ll do whatever it takes to be on the field.”

Voris said he isn’t leaning one way or the other on a quarterback because of their similar playing styles and work ethics.

“They can make plays with their arms and their feet and they do a good job of distributing the ball, getting us in and out of play,” Voris said. “I don’t know what’s going to make the difference.”

“We have a couple of scrimmages, and I know eventually we can only play one, but both of them are capable of winning football games.”

While the quarterback position remains to be determined, the Bulldogs are sure of one thing. With 36 freshmen, they are a young team with a lack of experience. Just eight starters return, four on each side of the ball.

Voris said he has been encouraged by the camaraderie and dedication the young Bulldogs have shown throughout camp.

“They’ve been picking each other up, supporting each other and competing against each other, and it’s been good,” he said. “It’s looked like any other camp we’ve had the last couple of years. It’s just got some new faces and I think that brings the energy.

Three starting linemen on each side of the ball return in 2014, which Voris says is key to winning a third-straight Pioneer Football League title and fourth in six years. Fifth-year senior Greg Ambrose anchors the offensive line at left guard, with juniors David Tiwari and Michael Demos as the tackles. The defensive line features fifth-year senior Christian Eble, junior Glen Somers and sophomore Kyle Annis.

“It’s cliché, but you win games in the trenches, Voris said. “The teams in our league that control the line of scrimmage are the teams that are playing at the top of the league every year.”

“So we feel good about the lines we’ve got returning, and we’ve got some young guys that are developing and they’re creating some competition there.”

“With all the new kids coming in and being a young team, it helps keep you feeling young and fresh,” Ciancio said. “They energize you every day. They help remind you of some of the basic things you have to remember as an older guy to remind them the basics of how to play football.”

Ciancio said he knows that his role as a senior is to lead a young squad to keep building the upcoming program.

“My job as an older guy that’s been here before is to help them take a step back and relax and help them read their keys and play fast,” Ciancio said. “And once everyone plays fast and we’re on the same page, then we can be as good as we want to be.”