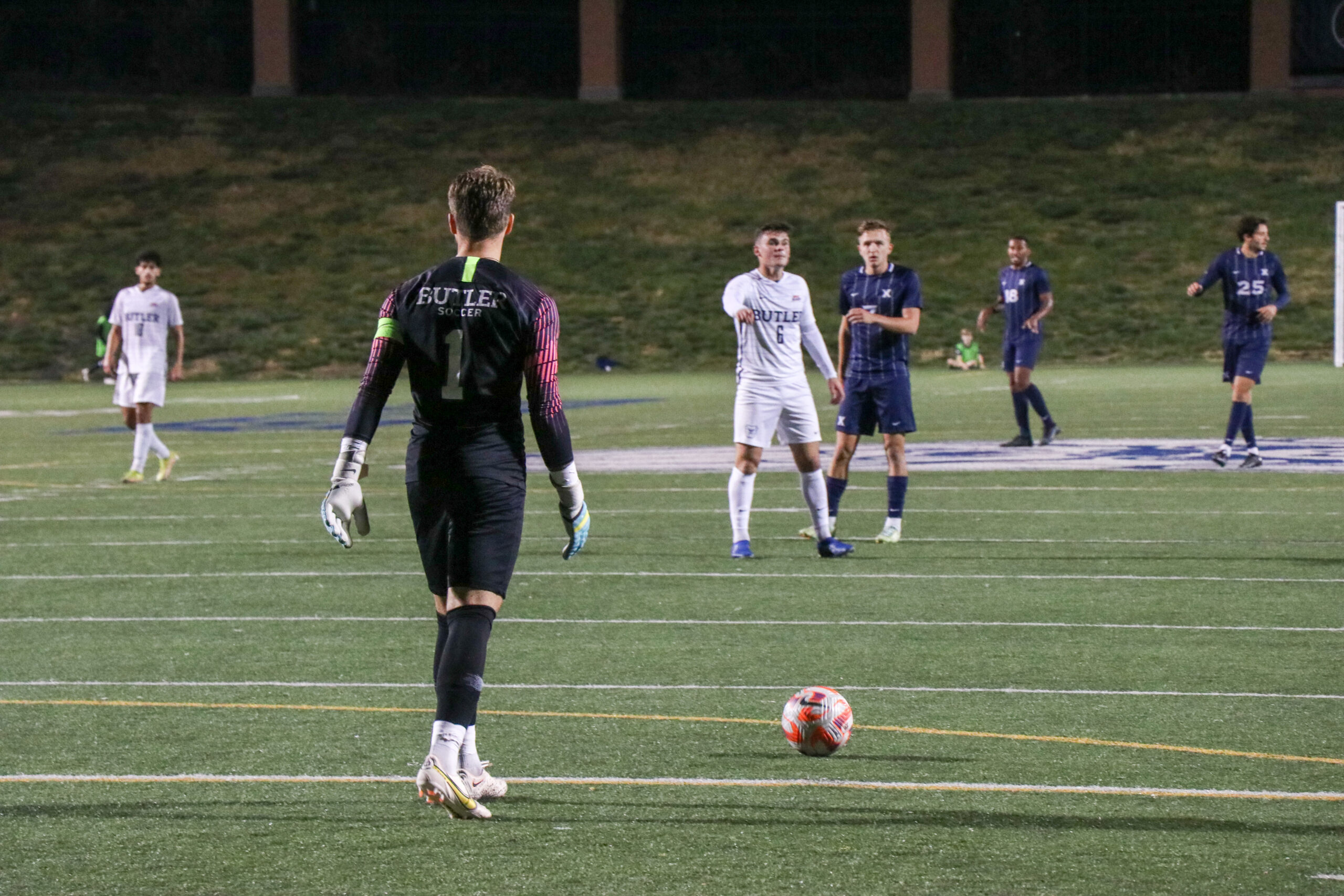 Fifth year goalkeeper Gabriel Gjergii looks onto the field during his shut-out against Xavier on Nov. 2. Photo by Grace Hensley.

The Butler men’s soccer team scored in the last 13 seconds of the game to tie Xavier 3-3 for the final score of the game. The Bulldogs ended their regular season with a 9-5-3 record and secured the No. 4 seed in the Big East Tournament. Butler scored on goals from senior Hemi Nasser, senior Wilmer Cabrera Jr. and first-year Palmer Ault.

The women’s volleyball team fell to St. John’s in three sets on Friday. St. John’s opened up the first set 5-1 and led start to finish throughout. The second set included 11 ties, but St. John’s put up six straight points to put them in control once again. The Red Storm won the last set 25-17 to seal the victory. Butler’s Amina Shackelford finished the match with a team-high 15 kills with a .333 hitting percentage.

Butler women’s swim team stayed in Indy to compete in a dual meet. First-year Kate Schilling won the 200 Free with a time of 1:57.50. Sophomore Alani Hightower-Bend swam a time of 58.70 to win the 100 Fly. First-year Olivia Stotts was named “Swimmer of the Meet” for the Bulldogs after her stellar performances in the 50 Free, 100 Free and 200 Free Relay.

The Butler women’s basketball team won big in their first exhibition game of the season against Benedictine 86-31. The leading scorer for the Bulldogs came off the bench in junior guard Caroline Strande who put up 17 points in 17 minutes along with going 6-6 at the free throw line. On defense, the Bulldogs produced 38 points off of 15 turnovers as a team. They held the Eagles to 22.6% from the field and 22.2% from behind the arc.

Butler football won in dramatic fashion on Saturday when redshirt junior Luka Zurak drilled a 56-yard field goal with no time on the clock to give the Bulldogs a 26-23 victory over San Diego. Butler scored 13 fourth quarter points to complete the comeback win. Zurak was named the FedEx Ground FCS National Special Teams Player of the Week after his performance. The Bulldogs now sit in second place in the conference standings with a 5-1 record.

The Bulldogs won an important conference win on Saturday night, sweeping Seton Hall in three sets. Sophomore Mariah Grunze had a match-high and new career-high 21 kills for the Bulldogs. Senior libero Jaymeson Kinley finished with 18 digs and first-year setter Cora Taylor had 20 assists. With the result, Butler is now 13-13 and 7-7 in the Big East.

The Butler men’s soccer team advanced to the semifinal round of the Big East Tournament after a 3-0 shutout against Providence. The first moment of action came in the 13th minute when redshirt senior midfielder Jack Streberger took a pass from Tommy Visser and dribbled it up to the top of the penalty goal. When the defenders closed in, he passed the ball off to first-year Palmer Ault who shot the ball into the left side of the net for an early 1-0 lead. At the 25 minute mark, DJ Hooks intercepted a pass from a Providence defender and one-timed a shot into the goal to put the Bulldogs up 2-0. The final goal came from Ault at the 68th minute.

The No. 5 Providence Friars produced 12 shots, four on the frame, but were unable to solve the Butler defense. Fifth-year goalkeeper Gabriel Gjergii completed four saves in the match, producing his fifth solo shutout of the season. He now has 21.5 shutouts in his career.

The men’s basketball team opened up their regular season against New Orleans at Hinkle Fieldhouse on Monday with a 89-53 victory. In his debut for the Bulldogs, graduate student center Manny Bates led the team with 25 points, 11 rebounds and three blocks. Five Bulldogs scored in double figures, including Chuck Harris, Eric Hunter Jr., Jayden Taylor and Simas Lukosius. Butler finished the first half on a strong 20-5 run in the final six minutes to lead 46-21 at the half. The Bulldogs were without Myles Wilmouth, Jalen Thomas and Ali Ali due to various injuries. Butler will travel to Penn State on Monday, Nov. 14 for their next matchup against the Penn State Nittany Lions.