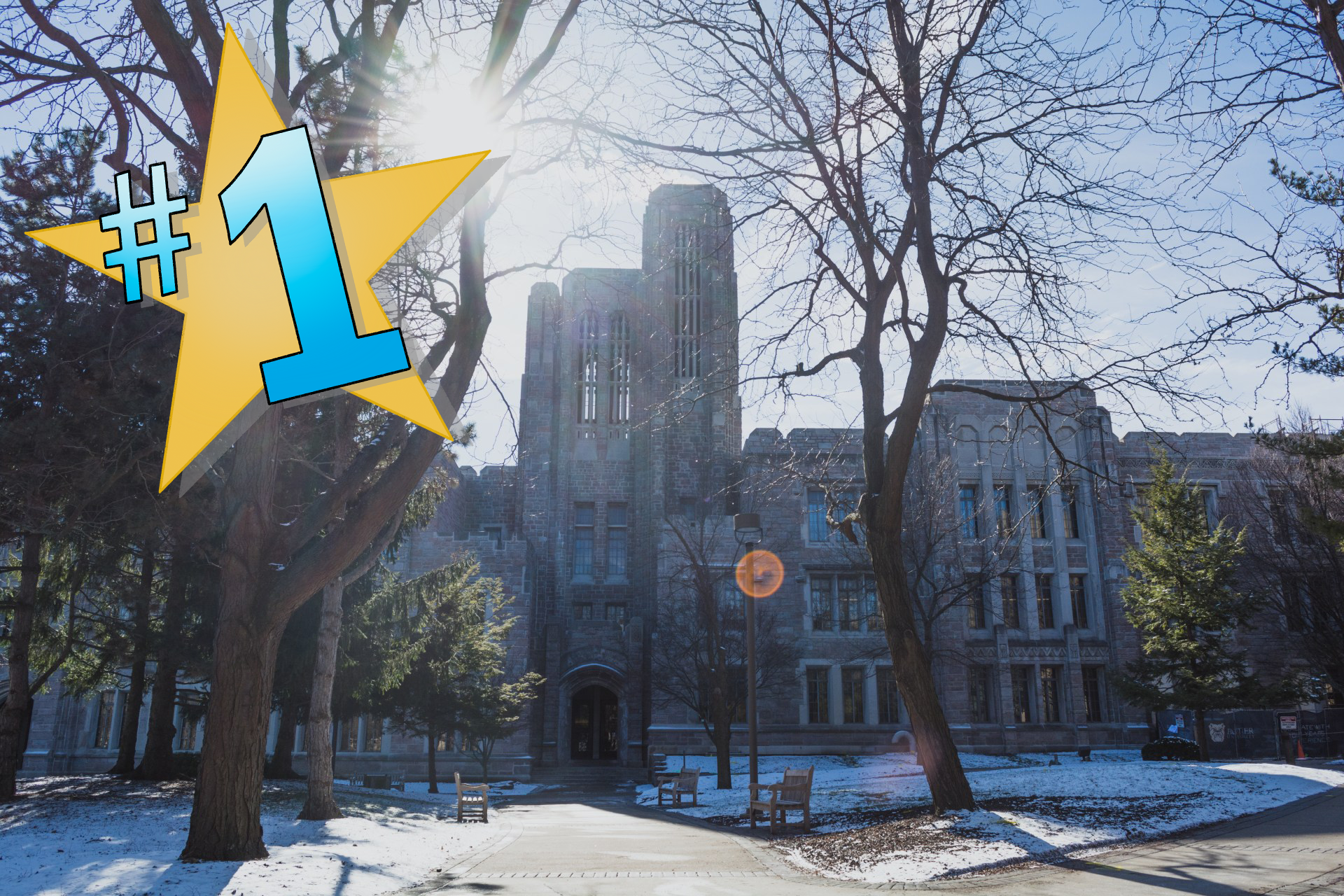 Jordan Hall may be crusty, but its vibes are unmatched. Collegian file photo, graphic by Haley Morkert.

Usually, when people tell you what their favorite academic building on Butler’s campus is, it’s based on the availability of study spaces, the aesthetics or the natural to artificial light ratio. What these people fail to recognize are the vibes of each building.

I get it, most people simply don’t possess the overwhelming psychic power that it takes to accurately read vibes. But I do. So, I present to you the definitive and factual ranking of Butler’s academic buildings based on their vibes.

It should not come as a surprise to anyone that Gallahue is the lowest-ranked building on this list. There is a reason tour groups avoid this building at all costs: its vibes are rancid.

Gallahue houses the departments of biology, chemistry, engineering and astronomy. As a humanities major, the natural sciences terrify me to my core. The memory of AP Chemistry in high school haunts me to this day, and whenever I set foot in Gallahue I think of the 40% I got on my first exam.

The terror inflicted on my soul by the sciences is only compounded by the wretched interior of Gallahue. The crumbling walls, exposed wires and flickering fluorescent lighting make the building look like an abandoned insane asylum. Frankly, I wouldn’t be surprised if it was haunted by some malevolent entity covered in a thick layer of asbestos preying on poor, pitiful students.

The university has recognized the vile vibes of Gallahue Hall and therefore have begun a renovation of the building. While this provides some hope for better vibes in the future, the ongoing construction in the building does not make it a safe or fun place for students.

Gallahue Hall is the place where vibes go to die. If you see any STEM students meandering around campus looking like the walking dead, it’s probably because they have been drained of their good vibes by the soul-sucking abyss that is Gallahue.

Unlike Gallahue, structurally, the COPHS building is fine. It’s bland, the lighting is adequate, and the classrooms are big. In this respect it is exceedingly mediocre. The COPHS building’s sinister vibes are not based on the building itself so much as they are on the evil that is housed within it.

The sciences are scary, and pharmaceutical science is arguably one of the scariest sciences there is. I live with the knowledge that a pharmacy student could probably poison me at any time, and it haunts me. You will never catch me eating dinner with a pharmacy major because I don’t have a death wish. When I see them walking out of the pharmacy building in their innocent-looking lab coats, I run the other way.

Health sciences majors are equally scary. The future doctors and healthcare professionals on this campus have a god complex that is unmatched. Whereas other STEM students are drained of their energy after sleepless nights studying their little equations and formulas — or whatever it is they do — health sciences majors thrive on constant stress. They don’t sleep, study 16 hours a day and consume exclusively Bang energy drinks.

If I lived like that, my body would probably shut down in under three days. Health sciences majors are the most powerful and most threatening people on this campus, and the Pharmacy and Health Sciences Building is their dark citadel.

This is probably my most controversial, yet brave take: Dugan Hall has bad vibes.

Dugan Hall tries to draw you in with its sparkling exterior and the mouth-watering scent of Butler Brew croissants, but don’t let yourself be fooled. Behind this facade lies something horrendous: business bros.

Business bros are the bane of my existence. One might go so far as to say that their diehard devotion to capitalism is morally reprehensible. If you’ve ever asked a business major why we can’t just print more money and subsequently watched their brains implode, you know exactly what I’m talking about.

Like my hatred for business majors, much of my disdain for Dugan Hall is rooted in my own anti-capitalist inclinations. From an outsider’s perspective, you might think it looks like a great place to study or just get a Butler Brew beverage. However, when you get inside, all the good study spots are taken and your beverage will drain you of your flex dollars. Dugan offers limited access to resources and unaffordable goods. Sound familiar?

Anyways, I digress. Dugan Hall has putrid vibes, and if you disagree with me, feel free to send an email. I won’t read it.

Lilly Hall takes the middle place on this list because it is so incredibly mediocre.

Listening to the music flowing from the open windows is nice, and I think it is important to support the fine arts. However, the whole atmosphere reminds me of my high school’s fine-arts wing which, as an ex-band kid, is definitely not a positive.

Our Jordan College of the Arts besties work too hard and deserve better than this bland building. How are they supposed to be inspired to create masterpieces when the building that they are imprisoned in has the vibes of a half-empty Dasani water bottle?

Fairbanks is fresh newspapers, sharing story ideas and the Collegian staff cramming into one small room to listen to the gospel of Ellie Allen. Good vibes only.

You don’t need to hear my whole spiel about how much I love the Collegian because this article is already long enough, but suffice to say that there’s a little piece of my heart in Fairbanks 210.

Aside from that, Fairbanks is just a nice place to be. The gargantuan window that looks out to the canal path gives the building an open, airy vibe that makes it a very relaxing place to study or just chill.

Although Fairbanks has good vibes, it doesn’t possess the outstanding vibes that the top two buildings exude. It’s nice enough but there just isn’t enough raw power to sweep me off my feet.

Of all the Butler buildings, Holcomb definitely has the most productive vibes. Whenever I study there, I feel like an intelligent, hard-working college student and not a burnt-out loser in a dying field with no career aspirations.

However, Holcomb does lose some points because I’m scared of the stairs. I don’t know what it is about them, but they have a very threatening energy. Let this be a warning to you to be wary of the Holcomb stairs.

I already know some of you will say “Jordan is creepy,” or “Jordan has roaches,” or “Jordan leaks when it rains,” and all of that is true. However, its vibes are off the charts.

Hanging out in Jordan fulfills my dire need to live out my dark academia fantasy. What am I going to college for if not to be mysterious and sexy and cool? A degree? No.

Also, I have an ongoing theory that the ghost of Butler Blue I haunts Jordan Hall at night. I don’t necessarily have any proof for this hypothesis, but I believe it with my whole heart. It just makes sense.

Jordan’s vibes reign supreme of all the Butler buildings. Though it may be crusty, dusty and musty, it is nonetheless the vibiest.