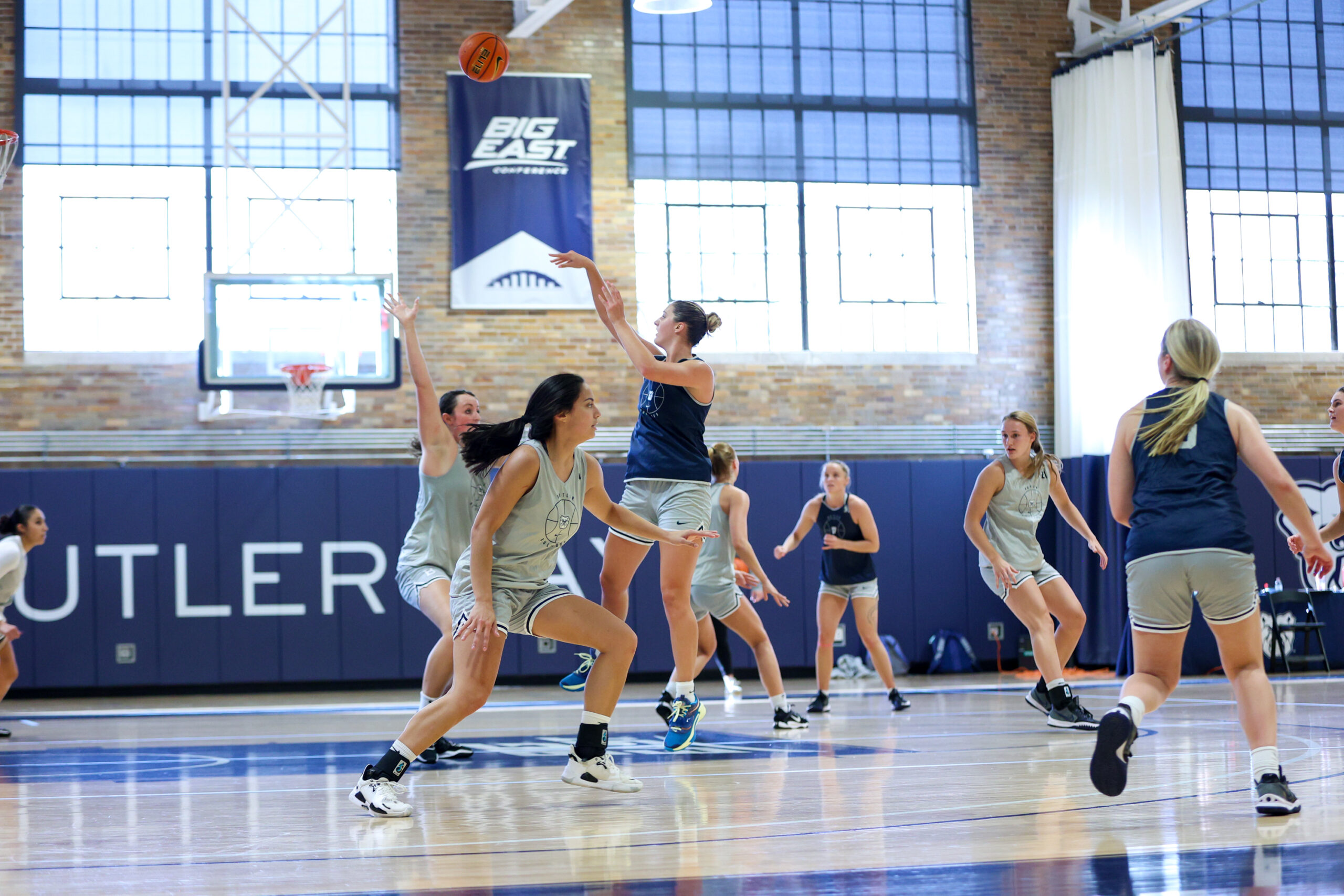 Sophomore forward Sydney Jaynes shoots the ball over her teammates at practice on Oct. 27. Photo by Claire Runkel.

The men’s soccer team will face off against No. 19 Xavier at 7 p.m. EST to conclude their regular season at the Bud and Jackie Sellick Bowl. The teams remain tied for the third position in the Big East Tournament that will begin on Saturday, Nov. 5. Butler clinched their spot in the Big East Tournament after a draw against Seton Hall. The game will be streamed live on FloSports and BEDN.

The women’s tennis team will travel to the Michigan State Invitational to compete this weekend to complete the fall portion of their season. The team is coming off a successful performance from junior Natalie Boesing, who won both of her qualifying matches at the ITA Ohio Valley Regionals.

The women’s volleyball team will travel to Queens, N.Y. to play St. John’s at 7 p.m. EST. In their first matchup this season, the Bulldogs fell to the Red Storm in three sets. Butler is coming off a 3-2 victory over DePaul.

The women’s tennis team will continue competition at the Michigan State Invitational.

The women’s swim team will stay in Indianapolis to compete at UIndy at 12 p.m. EST. Their last meet was at Bowling Green where their lone win came in the 200 Back when first-year Caroline Zimner swam a season-best time of 2:05.15.

The women’s basketball team will begin exhibition play against Benedictine at Hinkle Fieldhouse. Tip-off is set for 2 p.m. EST. After changes to the coaching staff and eight new additions to the roster, the Bulldogs will look to turn things around this season beginning this Saturday.

The football team will travel to San Diego to face the Toreros at 4 p.m. EST. The Bulldogs are riding a four-game win streak and a 6-2 record overall. Their last victory came over Morehead State with a score of 56-20. The game can be streamed on wccsports.com.

The women’s volleyball team will head to Seton Hall to face the Pirates. The first serve is set for 6 p.m. EST. In their match-up on Oct. 14, the Bulldogs beat Seton Hall 3-1.

The men’s soccer team will compete in the quarterfinals of the Big East Tournament. The results of the Xavier game will determine who has the higher seed. Kickoff is TBA. The game will be streamed live on FloSports and BEDN.

The women’s tennis team will finish competition at the Michigan State Invitational.

The men’s basketball team will play their first regular season game at home against New Orleans. Tipoff is scheduled for 6:30 p.m. EST. The game can be watched on FS1 and listened to on WXNT 1430 AM.