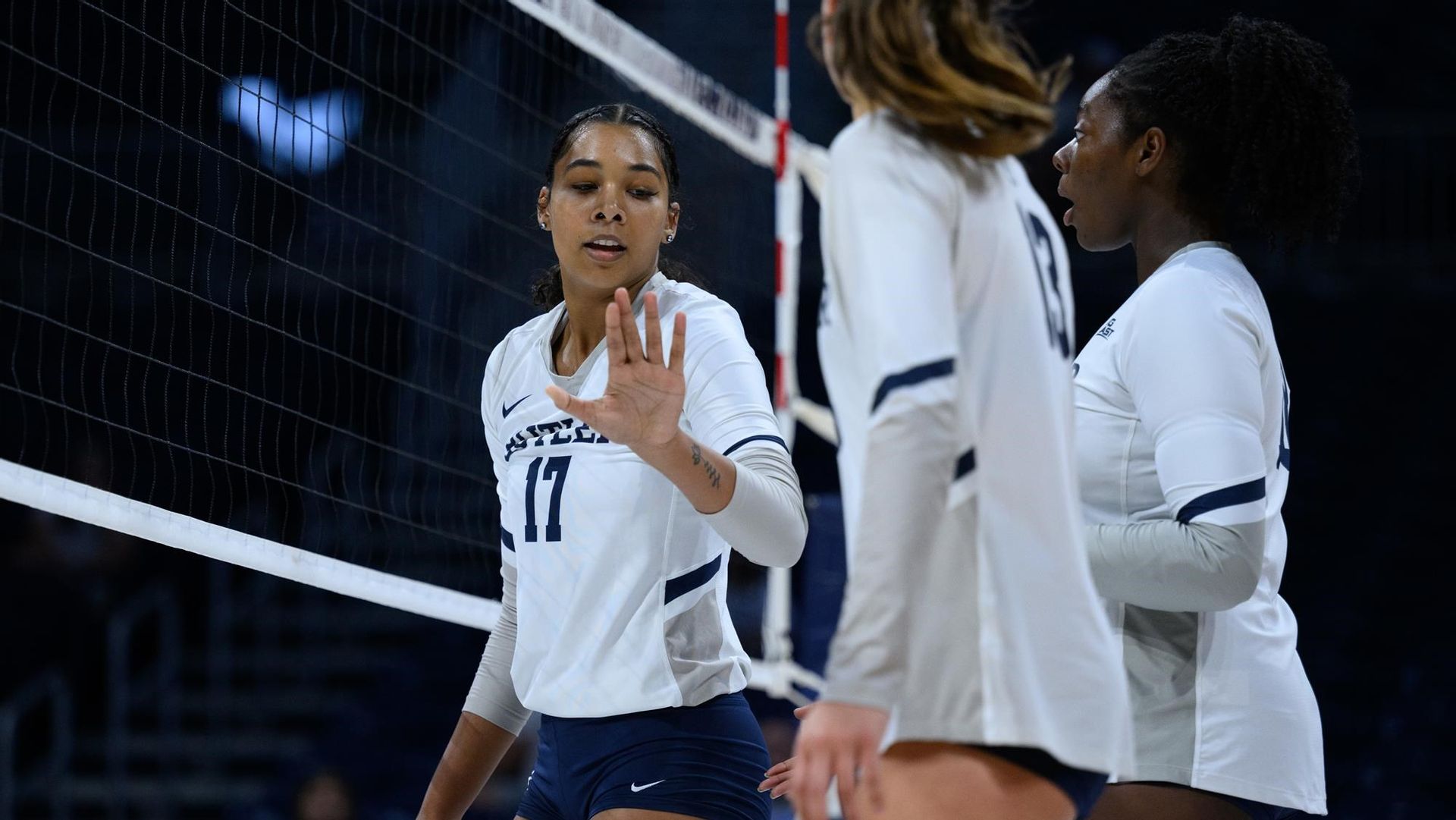 This weekend, the Bulldogs looked to continue their run in the Big East at Hinkle. On Friday, Oct. 14 and Sunday, Oct. 16, the Butler women’s volleyball team finished off their four-game homestand against the Seton Hall Pirates and the St. John’s Red Storm, respectively.

On Friday night, Seton Hall and Butler both got off to slow starts trading points with little two-point runs mixed in before a 16-16 tie would start a Bulldog surge. A block by first-year Cora Taylor and sophomore Destiny Cherry and a kill from sophomore Mariah Grunze helped the Bulldogs go on a 6-0 run pushing the first set score to 22-16. Two Bulldog kills and a block put Seton Hall away in the first set, 25-17, Butler.

In the second set, Butler found themselves up early with a four-point lead at 10-6, but the Pirate’s offense and defense brought them from behind to force an 11-11 tie. From there, Seton Hall outscored Butler 14-5 to win the set 25-16, evening the match one set a piece at the break. Senior Megan Sheridan led the Bulldogs’ offense with four kills in the set.

Coming out of the break, the two teams – once again – started the set trading points with little runs before Butler would turn an 8-8 tie into a 14-10 lead. A solo block from junior Amina Shackelford, an ace from senior Jaymeson Kinley, two kills from Sheridan and solo block from Sheridan helped bring the Bulldogs within two of a set victory at 23-13. Cherry’s set-point kill put away the chances of a Seton Hall comeback. The Bulldogs took the set 25-16 with a 2-1 set advantage heading into the fourth.

Despite trailing early in the fourth set, the Bulldogs would fight their way through a 10-10 tie starting with kills from Shackelford and aces from first-year’s Brooklyne Darby and Taylor giving the ‘Dawgs a 15-11 lead. Seton Hall tried to make a late-set comeback getting within one at 18-19, but Butler’s offense was too much for the Pirates to handle. Shackelford closed out the match with a kill to help the Bulldogs win 25-19.

In the opening set, Butler jumped out to an early 5-2 lead later propelling it to a 15-10 lead midway through the set. St. John’s rattled off five straight points with four kills and one block to tie the set 15-15. A solo block from Shackelford brought the Bulldogs to a late 21-21 tie with the Red Storm. Unfortunately, the ‘Dawgs were not able to capitalize off the block and dropped the opening set 25-22. The team had six blocks in the set, and Shackelford led the offense with five kills.

The Bulldogs jumped out to an early 7-3 lead in the third set including two aces from Darby. St. John’s stormed back to tie the set at 12-12 before the teams would trade points to force another tie at 18-18. A block between Darby and sophomore Grace Boggess would help bring the Bulldogs within two at 22-20. However, St. John’s would record their next three points on kills ending Butler’s threat. The Red Storm swept the Bulldogs 25-22, 25-15 and 25-21.

Boggess recorded a match-best .714 hitting percentage with five kills off seven swings, and Shackelford recorded a career-high eight digs which led the Bulldogs.

Following Butler’s win against Seton Hall and loss against St. John’s, the Bulldogs have recorded a 4-4 record against Big East competitors. Approaching the middle of conference play, Butler is tied for fourth in the conference with Seton Hall and Xavier.

The team will head out to the east coast looking for wins against UConn and Providence. Butler will face the Huskies on Friday, Oct. 21 at 6:30 p.m. before taking on the Friars the next day at 3 p.m.