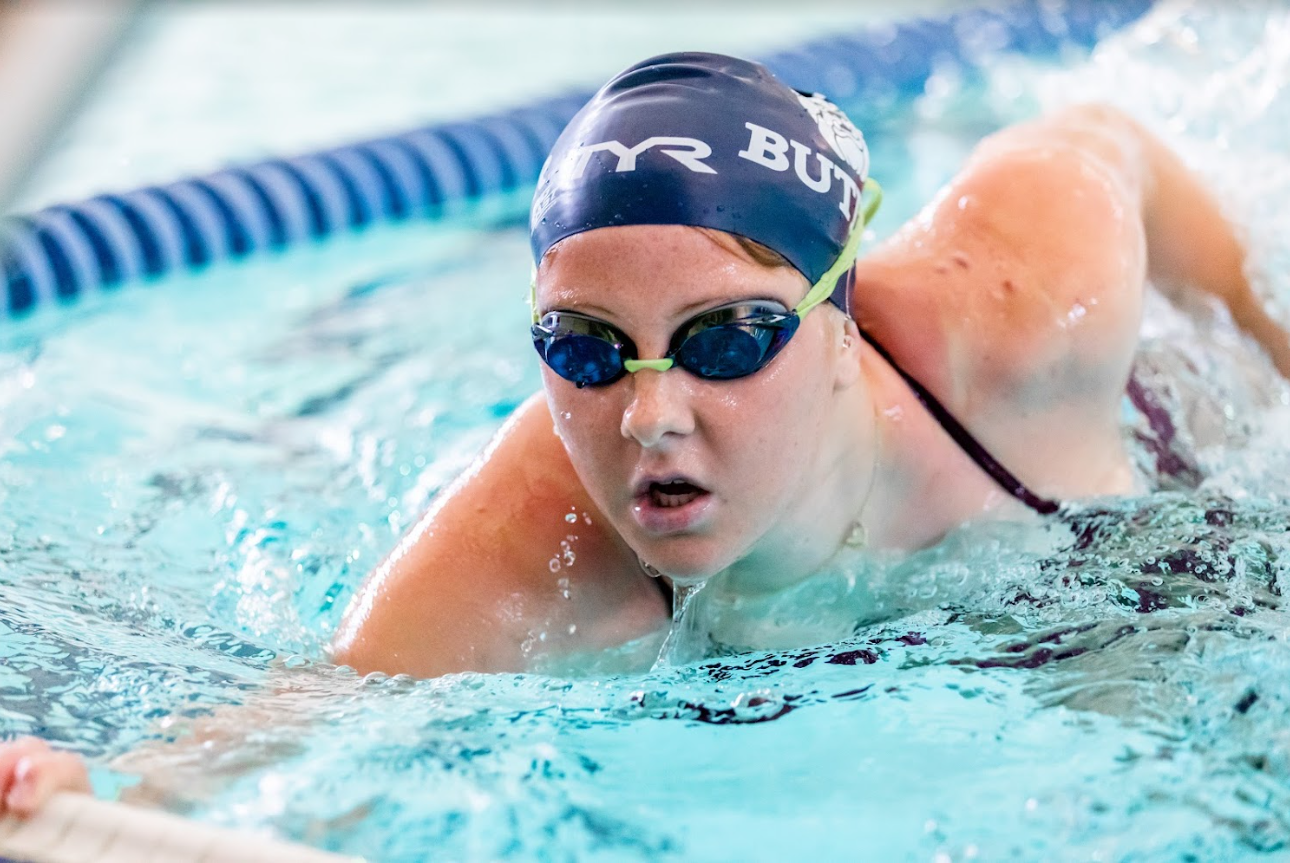 First-year Ava McGonigle in the pool during a team practice. Photo by Lauren Hough.

For the 2022-23 season, Butler women’s swimming is focusing on more than having success in the pool. They are striving to become closer as a team … closer as a family.

After a sixth-place finish in the Big East last season, expectations for the “Lady Swim Dawgs” — a moniker coined by head coach Maurice Stewart — haven’t changed much at all. Stewart projects that the Bulldogs will be able to finish in the same spot and potentially knock off a few higher-seeded teams in the Big East tournament.

More important to Stewart, however, is what the team dynamic will be this year. He wants his team to continue to build a positive team culture, “where our student-athletes are invested in one another,” and support one another in and out of the pool. Stewart believes doing so will “help facilitate a stronger academic-athletic balance” and in turn “make [the team] a happier, stronger, more mentally and physically sound student-athlete.”

Entering his 17th season in the role, Stewart has always emphasized the individual and group success of his athletes outside of the pool. Rachel Geller, a Butler graduate student in the physician assistant program and team manager, was a member of the swim team for the last four years. She says Stewart is one of the most dedicated coaches she has ever had.

That level of concern and care for his swimmers is what led to Geller returning to the team this season. In her eyes, the environment surrounding this team is the best she’s ever been a part of.

This season specifically, the Bulldogs have emphasized growing closer with one another in and out of the pool. Senior biology major and team captain Allie Carmichael says team bonding and creating chemistry are some of the things she is looking forward to in her final year on the team.

“I’m really looking forward to establishing camaraderie and practice,” Carmichael said. “That’s one of my favorite things about swimming — it is an individual sport, but it is something that you can’t do alone at the same time.”

One of the team-bonding activities Carmichael and the team have done so far was a progressive dinner. Over the course of a night, the seniors hosted different parts of a meal – appetizers, entrees and desserts — all at different houses. This allows the younger swimmers to become more comfortable around the older swimmers, while also presenting a safe space at the seniors’ houses.

First-year criminology and psychology major Olivia Stotts is one of those younger swimmers. Being on campus for nearly a month now, Stotts said that the bonds she is making with her teammates are solidifying her decision that Butler was the right choice for her.

“I came from a smaller high school, and this was a smaller college, so it felt like the right fit, like not too overwhelming,” Stotts said. “Plus, I came here on an official visit, so I got to meet a lot of the girls on the team. And just the environment as a whole was really welcoming, and I felt like I could really improve my swimming at a school like this.”

Someone who had that same mindset last year is sophomore psychology major Alani Hightower-Bend. Hightower-Bend was named “swimmer of the meet” by Stewart in last season’s conference championships and also won the team award presented to an outstanding freshman. After a successful rookie campaign, she plans to perform even better this time around.

“[I want to improve on] times, beating my own records and try to make [the NCAA swimming and diving championships] … amping it up for sure,” Hightower-Bend said.

Butler women’s swimming will get their first chance this season to “amp it up” on Sept. 25 when they host the Butler Double Dual at Fishers High School in Fishers, Indiana.