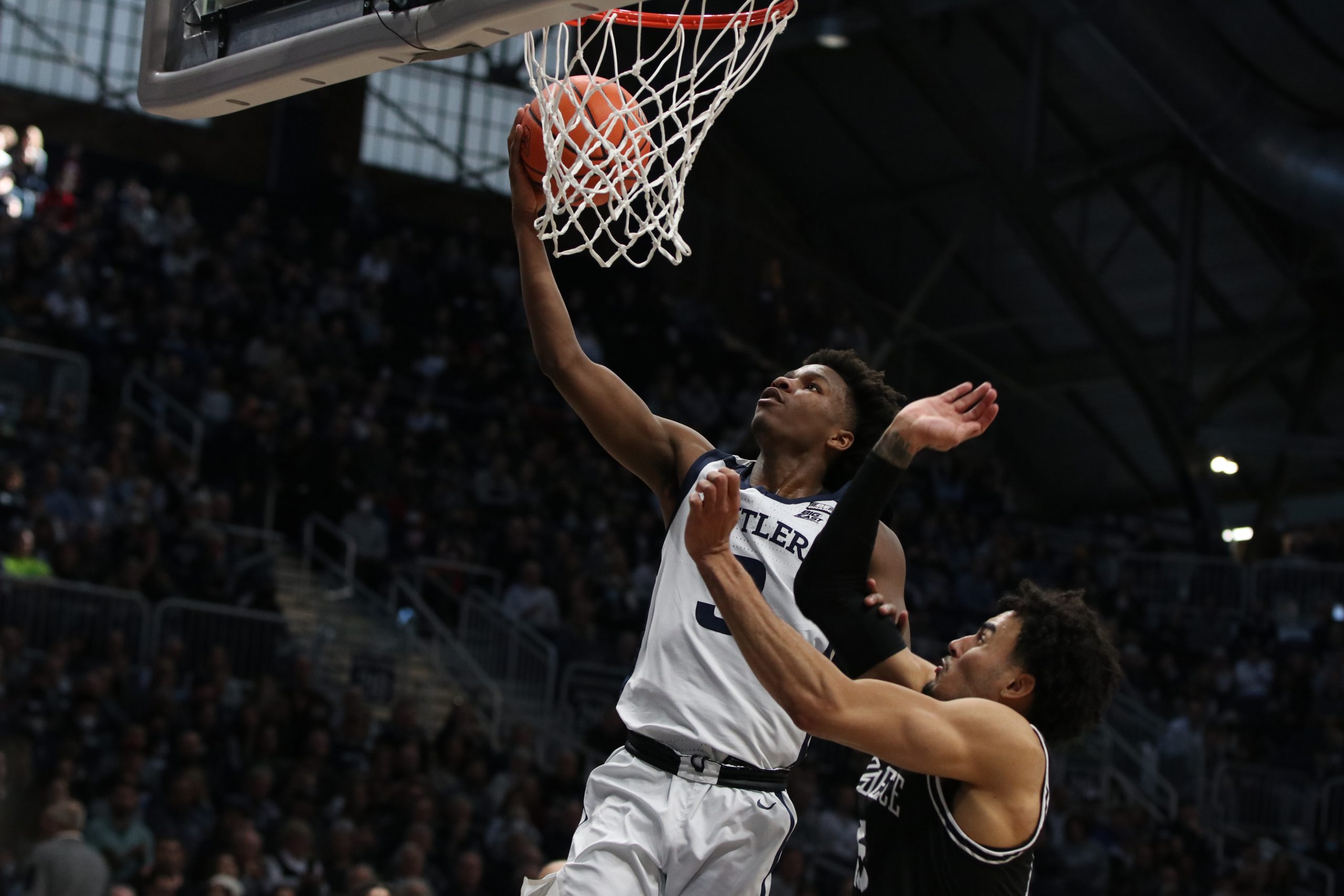 Sophomore guard Chuck Harris drives to the rim for a layup against Providence on Feb. 22 at Hinkle Fieldhouse. The Bulldogs ultimately lost in overtime, 70-71, after leading for 36 consecutive minutes in regulation. Photo by Francie Wilson.

Where do the woes end for the Dawgs? After establishing a 19-point advantage and leading for over 36 minutes in their previous contest against the Providence Friars — the Bulldogs ultimately collapsed, allowing the Friars to force overtime and make off like bandits with a 71-70 victory at Hinkle. The loss against Providence marks the fourth time the Dawgs have lost by one possession in the month of February alone.

With less than two weeks remaining before the Big East tournament and the Bulldogs sitting third-to-last and 13-15 overall, all hope for a March Madness bid seems lost — barring a first place finish in Madison Square Garden.

In the meantime, the Dawgs will continue to focus on the opponent in front of them and work to rebuild their confidence after a morale shattering loss Sunday afternoon. Up next for Butler will be Seton Hall, an opponent that handily took care of the Bulldogs earlier this season with a 71-56 victory at Hinkle on Jan. 4. Here is what you need to know before this matchup:

The Dawgs have been outplayed and outcoached down the stretch

Currently within Big East play, the Dawgs have led or tied going into halftime in 10 out of 17 games, but have only managed to secure six total victories in those matchups. On the flipside, the Bulldogs have failed to win a single game in the seven contests in which they haven’t been leading or tied going into halftime. A 60% win rate going into the second half with the advantage and 0% win rate when trailing is a recipe for failure, and a quick way to find yourself in the bottom of the standings.

Additionally, when the game has hedged on the final seconds, the Dawgs have consistently failed to come out on top — managing a 2-4 record in one possession finishes.

When push comes to shove, the Dawgs have ultimately folded under the pressure of their opponents.

Blocks, boards and boxing out

Although Seton Hall is having a mediocre season by all means, the Pirates have been stellar at protecting the rim and snatching away second chance opportunities. The Pirates rank No. 16 in block shots at the Division I level with 5.3 blocks per game. In conjunction with stuffing shooters at the point of contact, they also average a staggering 39.6 rebounds per game, ranking them No. 50 in defensive rebounds per game and No. 36 in offensive rebounds per game with 27.2 and 12.3, respectively.

This is a matchup nightmare for the Dawgs, who average a mere 32 rebounds per game and have a rebound margin of -1.2 against their opponents this season. Ranking the Dawgs in the bottom third of all 358 Division I teams.

Last time around, the Pirates outrebounded the Bulldogs 36-25, including eight rebounds on the offensive end. Forward Alexis Yetna and 7-foot-2-inch center Ike Obiaguwa were a big part of the Pirates success on the boards as they notched 13 combined rebounds and made it difficult for the Dawgs to take control of the glass.

It is essential for LaVall to preach dominating the paint and boxing out their opponent. This must be priority number one and the key to victory. If the Dawgs are unsuccessful in getting the ball to fall their way, the game will likely be another one in the loss column.

Guard Bo Hodges and forward Bryce Nze both returned to the lineup this past weekend following missing prior games with injuries. They both missed time against DePaul, and Hodges missed an additional game against St. John’s.

Hodges and Nze both are in the top five for total rebounds on the team, with Nze leading all players with 115. Additionally, both are key contributors to scoring with Hodges and Nze, respectively averaging 9.2 and 8.3 per game.

In their return against Providence, Hodges scored 13 points and eight rebounds while Nze provided 11 points and three rebounds — substantially generating for the Dawgs and helping them out early over the Friars.

If these two can remain healthy and active in the starting lineup, it can help set the tone of the game for the Dawgs — which aforementioned — is key for the Bulldogs to have a remote chance of leaving Newark with a W.